News
Business
Movies
Sports
Cricket
Get Ahead
Money Tips
Shopping
Sign in  |  Create a Rediffmail account
Rediff.com  » News » Trump did not want to be US president, new book claims

And Melania was in tears -- not of joy -- on knowing about the surprising electoral victory. 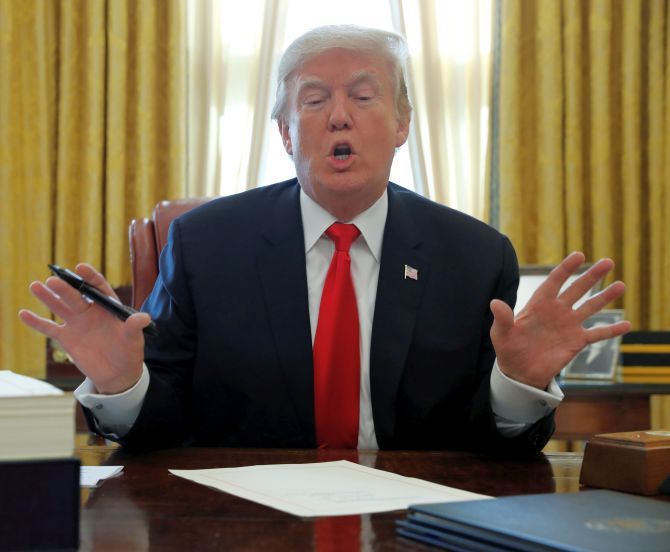 Donald Trump did not want to be the president of the United States and the First Lady Melania was in tears -- not of joy -- on knowing about the surprising electoral victory last year, according to a new book by an American journalist.

The book Fire and Fury: Inside the Trump White House written by Michael Wolff, claims that the ultimate goal of Trump was never to win.

"His ultimate goal, after all, had never been to win. I can be the most famous man in the world," he had told his aide Sam Nunberg at the outset of the race.

"His longtime friend Roger Ailes, the former head of Fox News, liked to say that if you want a career in television, first run for president," according to the excerpts of the book.

"Shortly after Trump's inauguration, Wolff said, he was able to take up "something like a semi-permanent seat on a couch in the West Wing" -- an idea encouraged by the president himself. Because no one was in a position to either officially approve or formally deny such access, Wolff became "more a constant interloper than an invited guest."

"There were no ground rules placed on his access, and he was required to make no promises about how he would report on what he witnessed," the book said.

White House press secretary Sarah Sanders has however denied this after excerpts from the book were published by New York Magazine with the title "Donald Trump Did Not Want to be President."

"There was one brief conversation that had nothing to do, originally, with the book. It was, I think, around five to seven minutes in total since the President has taken office. And that's the only interaction that he's had," she said.

According to Wolff, after entering the White House, Trump, while proposing the most radical departure from governing and policy norms in several generations, had few specific ideas about how to turn his themes and vitriol into policy.

"And making suggestions to him was deeply complicated. Here, arguably, was the central issue of the Trump presidency, informing every aspect of Trumpian policy and leadership: He didn't process information in any conventional sense. He didn’t read. He didn't really even skim. Some believed that for all practical purposes he was no more than semi-literate. He trusted his own expertise -- no matter how paltry or irrelevant -- more than anyone else's," the author claimed.

"Shortly after 8 PM on election night, when the unexpected trend -- Trump might actually win -- seemed confirmed, Don Jr. told a friend that his father, or DJT, as he calls him, looked as if he had seen a ghost. Melania was in tears -- and not of joy," the book said.

"There was, in the space of little more than an hour, in Steve Bannon's not unamused observation, a befuddled Trump morphing into a disbelieving Trump and then into a horrified Trump. But still to come was the final transformation: Suddenly, Donald Trump became a man who believed that he deserved to be, and was wholly capable of being, the president of the United States," according to the book.

Wolf claims that from the moment of victory, the Trump administration became a looking-glass presidency: Every inverse assumption about how to assemble and run a White House was enacted and compounded, many times over.

"The decisions that Trump and his top advisers made in those first few months -- from the slapdash transition to the disarray in the West Wing -- set the stage for the chaos and dysfunction that have persisted throughout his first year in office," Wolf said in his book.

"This was a real-life version of Mel Brooks’s The Producers, where the mistaken outcome trusted by everyone in Trump’s inner circle -- that they would lose the election -- wound up exposing them for who they really were," Wolff said.

According to New York Magazine, Wolff, who chronicles the administration from Election Day to this past October, conducted conversations and interviews over a period of 18 months with the president, most members of his senior staff, and many people to whom they in turn spoke.

"Nothing contributed to the chaos and dysfunction of the White House as much as Trump's own behavior. The big deal of being president was just not apparent to him," Wolff said.

"Most victorious candidates, arriving in the White House from ordinary political life, could not help but be reminded of their transformed circumstances by their sudden elevation to a mansion with palace like servants and security, a plane at constant readiness, and downstairs a retinue of courtiers and advisers. But this wasn't that different from Trump’s former life in Trump Tower, which was actually more commodious and to his taste than the White House," said the author.

The White House has ridiculed the contents of the book, which will hit the stores next week, and described it as a fiction.

"This book is filled with false and misleading accounts from individuals who have no access or influence with the White House," Sanders said.

"Participating in a book that can only be described as trashy tabloid fiction exposes their sad desperate attempts at relevancy," she said.

The White House has described the book as "trashy tabloid fiction."

"The author did not get any access from the White for this book. He never actually sat down with the President, just to be very clear," Sanders told reporters at her daily news conference.

"I know that the book has a lot of things, so far of what we've seen, that are completely untrue. You have many people that have quotes that are sourced to them that are now coming out publicly and saying that those things are not true," she said in response to a question.

The book also says that US President Donald Trump was sympathetic to the issues of Silicon Valley including H-1B visa issue.

This appears to be contrary to the tough stand he has taken on H-1B visa now. After a meeting with a delegation of Silicon Valley leaders at the Trump Towers on December 14, 2016.

Trump then as president-elect is quoted as saying that the tech industry needs help as there are too much of a regulation.

"Take this H-1B visa issue. They really need these H-1B visas," Trump is quoted as telling Rupert Murdoch over phone after the meeting, according to the book .

"The president-elect enjoyed being courted. On December 14, a high-level delegation from Silicon Valley came to Trump Tower to meet him. Later that afternoon, according to a source privy to details of the conversation, Trump called Rupert Murdoch, who asked him how the meeting had gone," Wolff writes in the book.

"Oh, great, just great," said Trump. "These guys really need my help. Obama was not very favorable to them, too much regulation. This is really an opportunity for me to help them," the book said.

"Donald," said Murdoch, "for eight years these guys had Obama in their pocket. They practically ran the administration. They don't need your help. Take this H-1B visa issue. They really need these H-1B visas," Trump said,
according to the book.

"Murdoch suggested that taking a liberal approach to H-1B visas, which open America’s doors to select immigrants, might be hard to square with his promises to build a wall and close the borders. But Trump seemed unconcerned, assuring Murdoch, "We'll figure it out," Wolff writes.

"What a fucking idiot," said Murdoch, shrugging, as he got off the phone, the author claims.

The sympathetic view of Trump towards H-1B visa appears contrary to his public views on this popular work visa. Even during his election days, he had called for his strict review and described it as eating away with American jobs.

After becoming the president, Trump has ordered for review of H-1B visas. His administration has come out with strict policies on issuing H-1B visas, the book said. 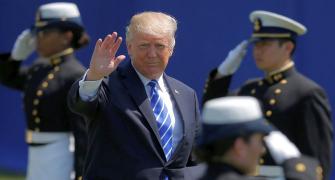 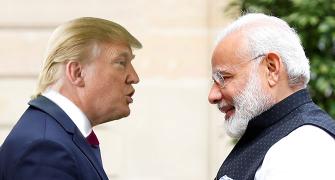 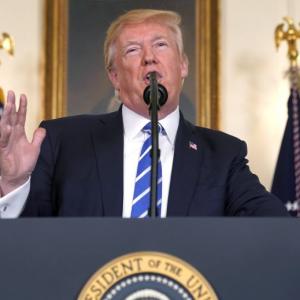