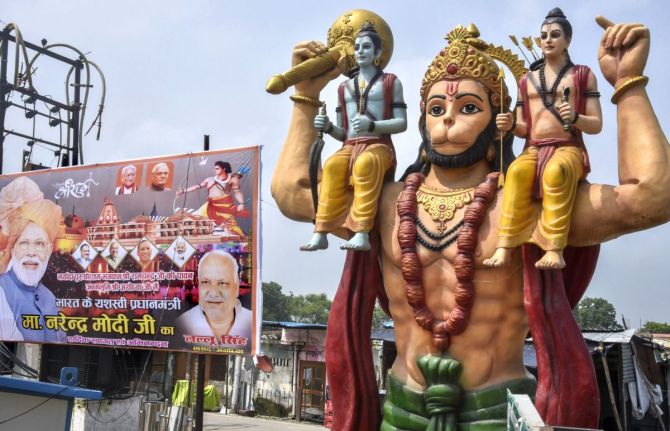 IMAGE: A hoarding of PM Narendra Modi and other leaders put up beside a statue of Lord Hanuman, ahead of the foundation laying ceremony of Ram Temple, in Ayodhya. Photograph: PTI Photo

"It is important that the PM is going. The chief minister (Thackeray) can go there anytime, Raut told reporters here while extending good wishes for the ceremony.

The 'bhoomi pujan' of the Ram temple is scheduled to be held on Wednesday at Ayodhya in Uttar Pradesh and is expected to be attended by Prime Minister Narendra Modi.

Raut reiterated the Shiv Senas contribution in the Ram temple construction campaign, and said the party has given Rs 1 crore for the purpose of building the temple.

"The outbreak of COVID-19 in Ayodhya and surrounding areas is a matter of concern...Uttar Pradesh's minister Kamal Rani (Varun) lost life (due to the disease), while three other ministers are infected," Raut said.

"I think as less people as possible should go there and the ceremony there be held. It is important that the PM is going. The chief minister (Thackeray) can go there anytime, the Rajya Sabha member said.

Asked if Thackeray has not been invited for the ceremony, Raut said, Nobody is waiting for the invitation."

He said the chief priest of the temple and security guards there have been quarantined.

The Shiv Sena does not want to give a political angle to the issue (of party leaders not being invited), he said, adding that the situation in Ayodhya is serious and a kind of medical emergency is prevailing there".

"And you (the media) are asking about who is going and all. As less number of people as possible should go there...we will go there later, Raut said, adding that even BJP veterans like L K Advani and Murli Manohar Joshi, who played key roles in the temple campaign, were unlikely to attend the ceremony due to the COVID-19 outbreak.

The Shiv Sena had laid the foundation of the temple construction, he said.

The temple construction would not be possible had the Babri mosque not been brought down, he said.

The BJP, VHP and the Sangh Parivar accepted that it was the Shiv Sainiks (Shiv Sena workers) who had "pulled down the mosque", he said.

"So, we had laid the road (of temple construction). We are happy that the temple is being built. And you have seen that Uddhav Thackerayji, our Shiv Sena has given Rs 1 crore fund for it, he added.

The Babri mosque in Ayodhya was demolished on December 6, 1992 by 'kar sevaks' who claimed that an ancient Ram temple had stood on the same site. Advani and Joshi were leading the Ram temple movement at that time.

In November last year, the Supreme Court paved the way for the construction of Ram temple at the disputed site in Ayodhya, and directed the Centre to allot an alternative five-acre plot to the Sunni Waqf Board for building a new mosque at a "prominent" place in the holy town.

"Mumbai Police are able. Trust should be reposed into them if they are investigating the case. Police of the world have faith in the Mumbai Police," the Shiv Sena leader said.

"So, when the probe is on, the person who is not in the government and not related to it, like me, should not comment about the probe. It is not right, he added.

Rajput, 34, was found hanging at his apartment in suburban Bandra on June 24.

The Mumbai Police, who are probing Rajput's death, have so far recorded statements of nearly 40 people, including those from the actor's family, his cook and people from the film industry like filmmaker Mahesh Bhatt, film critic Rajeev Masand, director-producer Sanjay Leela Bhansali and filmmaker Aditya Chopra.

A Bihar Police team is probing a separate 'abetment to suicide' case on the basis of a complaint filed by the late actor's father in Patna last week. 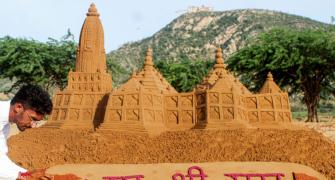 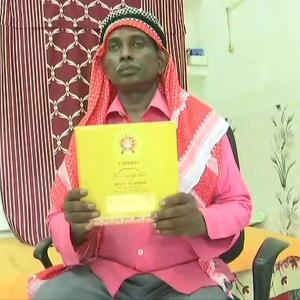