For the past three and a half decades, brothers Shankarlal and Bhagwatlal 'Pahaadhi' have been stitching clothes for Ram Lalla in Ayodhya. 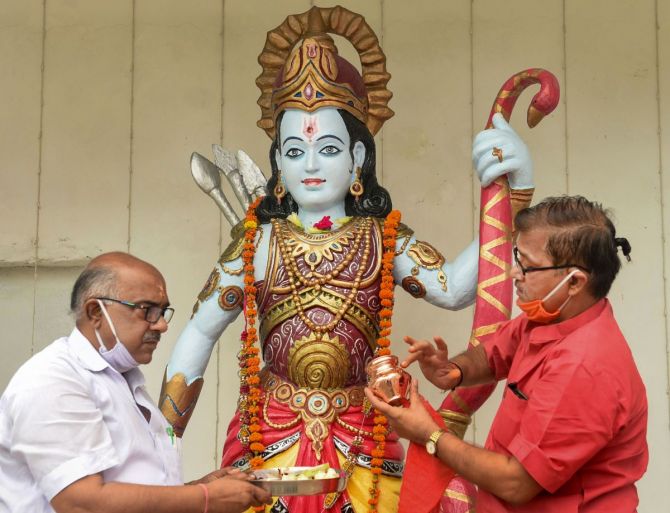 IMAGE: Soil of Aishbagh Ramlila ground is collected and sealed in a copper pot, to be sent for ground breaking ceremony of Ayodhya's Ram Temple, in Lucknow. Photograph: Nand Kumar/PTI Photo

Their dedication will be manifest in the splendid dress they have meticulously crafted for the deity to wear on August 5, during the bhoomi pujan ceremony of the Ram temple.

Operating from their shop named after their late father Babulal and located in Ayodhya's Badhi Kutiyaa area, the brothers stitch clothes for only deities and seers.

"My father late Babulal started stitching the clothes of Ram Lalla in 1985. He used to carry our sewing machine to the Ramjanmabhoomi and stitch the clothes with me and my elder brother in tow," Shankarlal, 54, told PTI on Monday.

"The three of us used to make the clothes of Lord Ram. The dresses were made and stitched virtually in front of the deity. Since then, our work is continuing," he said.

Shankarlal said that for Wednesday, the day of bhoomi pujan to mark the beginning of the construction of the grand Ram temple in Ayodhya, two sets of dresses have been made -- one is green, while the other is orange.

"The clothes are made using soft material such as makhmal (velvet). After all, they are for Ram Lalla who is a child. The green dress has been made keeping in mind the day-specific colour, while orange is considered auspicious," he said.

On Wednesday, the green dress will be worn first and the orange one later, Shankarlal said.

The special dress for the ceremony has nine gems stitched in golden thread.

"There is grandeur in the clothes of the Lord as well," he said.

On Sunday, the dresses were handed over by the tailors, said Acharya Satyendra Das, the chief priest of the Ram temple.

"A day-specific colour scheme is followed for the dresses worn by Lord Ram. On Monday the dress is white, on Tuesday it is red, while on Wednesday it is the turn of the green dress for the Lord," Shankarlal said.

On Thursdays the idol is dressed in yellow, Fridays are for cream-coloured dresses, on Saturdays it is the turn of blue clothes while on Sundays pink clothes adorn the deity.

Shankarlal also said the same cloth, with which Ram's dress is stitched, is used to make dresses for Lakshman, Bharat, Shatrughan, Hanuman and Shaaligram.

"Earlier, 11-metre-long fabric was required to make the dress, but now, we need about 17 metres of cloth. Once the grand temple is built, I do not know how much cloth will be required to make one set of dresses for Lord Ram and others," Shankarlal said.

At present, Shankarlal is assisted by his nephews Pawan Kumar, Sanjay Kumar and Shravan Kumar. "My son Rajveer is in class 7. As soon as he clears class 8, he will join me," he said.

Shankarlal's elder brother Bhagwatlal 'Pahaadhi' attributed their stitching expertise to God. "The entire family is involved in this. Whatever qualities have been given by God, we are making dresses using those qualities only. It is He who is getting them made by us, as He gets everything done."

Interestingly, the brother duo and their family members depend on other tailors for their own apparels.

"We only make clothes for Lord Ram and some clothes of seers. We do not accept any orders from the common people. We even do not make our own clothes. Our own clothes are made using the services and expertise of other tailors," Shankarlal said.

"I feel overwhelmed that I was born in Ayodhya and got an opportunity to serve Ram Lalla. What could give more happiness than this?" he asked.

The brothers and their shop are a centre of attraction these days due to the media's presence as the city prepares for the groundbreaking ceremony.

Passersby often greet them with chants of 'Jai Sriram' which the duo is quick to reciprocate, much to the delight of the visiting devotees.