A Kashmiri Pandit was shot dead by terrorists in the Shopian district of Jammu and Kashmir on Saturday, officials said. Deputy inspector general of police Sujit Kumar said the Kashmir Freedom Fighter group, the proxy name of a terrorist outfit, has claimed responsibility for the attack.

Puran Krishan was attacked near his residence in the Chowdhary Gund area of south Kashmir district, they said, adding that doctors declared Krishan brought dead after he was shifted to Shopian hospital.

Officials said the area has been cordoned off and a hunt launched to nab the assailants.

"Terrorists fired upon a civilian (minority) Puran Krishan Bhat while he was on his way to an orchard in Chowdari Gund, Shopian. He was immediately shifted to a hospital for treatment where he succumbed. Area cordoned off. Search in progress," the Kashmir Zone Police wrote on Twitter.

DIG Sujit Kumar said the initial investigation has revealed that one militant fired upon Bhat.

"There was security, our guard, for this cluster. We are looking at the reason (for the lapse). He had gone out on a scooter and just returned to his home," he added.

Kumar said in case of any lapse, action will be taken against the security guards and the in-charge officials in the area.

Investigations are underway and more details will be made public once things become clear, the police officer said.

Deputy commissioner of Shopian Sachin Kumar Vaishya said Bhat's body will be taken to Jammu where the last rites will be performed.

"All arrangements are being made. We are extending help to the family."

"Attack on Puran Krishan Bhat by terrorists in Shopian is a dastardly act of cowardice. My heartfelt condolences to the bereaved family. I assure the people that the perpetrators and those aiding and abetting terrorists will be severely punished," Sinha tweeted.

The National Conference condemned the "brazen and cowardly attack" and expressed "heartfelt commiserations" with Bhat's family.

The party's vice president, Omar Abdullah, termed the attack reprehensible. "I unequivocally condemn this attack...," he said in a tweet.

The PDP said while the Kashmiri Pandits have been protesting for the last five months demanding their relocation after Rahul Bhat was shot dead in May, the "LG administration in their hubris kept turning a blind eye to their plight".

"Today yet another Kashmiri Pandit, Puran Krishan, was shot dead in Shopian. Thoughts and prayers are with the bereaved family," the party said.

"Pained beyond words to hear the news about militant attack on Kashmiri Pandit P K Bhat in Shopian, J&K today. I strongly condemn this heinous act of violence. My thoughts are with the family of Puran Krishan Bhat. May the departed soul rest in peace," he wrote on Twitter.

Communist Party of India-Marxist leader MY Tarigami said the government must ensure foolproof security for the minorities in Kashmir Valley.

"Pained beyond words by the despicable attack which snuffed out the life of Puran Krishan Bhat. There does not seem any letup in the killing of innocent people. The government must ensure foolproof security to the minorities," he tweeted.

In a statement, he said "these anti-national elements will never be successful. These things will not be tolerated anymore as these attacks are aimed to disturb the peace in the region."

The Peoples Conference said there can never be a justification for attacks like these.

The Hurriyat Conference led by Mirwaiz Umar Farooq expressed shock and grief over the killing.

In a statement, the Hurriyat said every single life lost in this manner is very painful and sad. It extended condolences to the bereaved family and expressed solidarity with them in their hour of great sorrow.

Meanwhile, hundreds of protesting Kashmiri Pandit employees, who are seeking their transfer from the valley, on Saturday blocked the Jammu-Akhnoor road to protest the killing of Puran Krishan Bhat.

The Pandits, employed under the prime minister's employment package, are on a protest at the relief commissioner's office in Jammu over the past five months following the killing of their colleague Rahul Bhat in Kashmir last May. 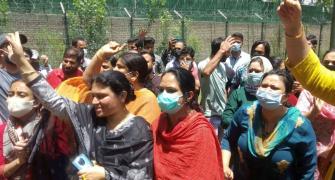 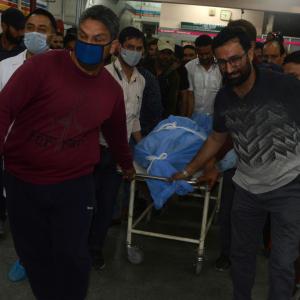