Crying foul, the DMK said the search action was 'politically motivated,' an 'abuse' of authority and condemned it, blaming the ruling All India Anna Dravida Munnetra Kazhagam and its ally, the Bharatiya Janata Party.

The searches over suspected tax evasion began in the morning and it covered multiple premises connected to Velu, a prominent leader of the main opposition DMK, based in Tamil Nadu's Tiruvannamalai district.

Income Tax department indicated that a statement on the searches was unlikely on Thursday.

DMK general secretary Duraimurugan said tax officials have conducted searches in Velu's residence at Tiruvannamalai and other premises linked to him.

Though authorities have a right to search, "the DMK considers the present searches as politically motivated," Duraimurugan, the second in command after party president M K Stalin, told reporters in Chennai.

Apart from searching premises including a college, raid was also conducted in the guest house of Velu, where Stalin was staying and it was condemnable, he said.

Such action would not demoralise the DMK and searches would only earn sympathy and votes, he said.

The AIADMK has instigated the searches wantonly through the BJP-led Centre since the ruling party has been staring defeat at the hustings, the DMK leader claimed.

Terming the raids 'abuse' of authority and anti-democratic, the DMK leader condenmed the action and said this has been done as the AIADMK and BJP would not be able to electorally triumph over his party.

Using the CBI and Income Tax departments, the Centre thought that it could initimidate and dominate parties in states and thereby push its agenda of 'one nation' and 'one culture.'

Assembly polls are scheduled on April 6 in Tamil Nadu and over the past few weeks, several premises associated with others, including political functionaries, have been searched by income tax sleuths in the state. 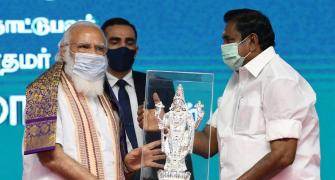 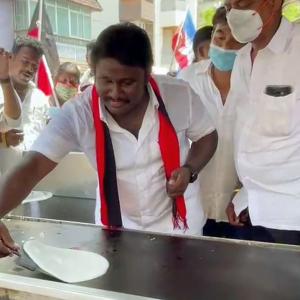 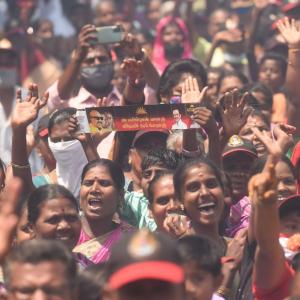