With three weeks left for polling day in Tamil Nadu, April 6, it is difficult to tell which of the two majors in the fray -- the ruling All India Anna Dravida Munnetra Kazhagam led front or the Opposition DMK-led front -- is ahead in the race to the state secretariat.

Every day in the course of campaigning Tamil Nadu Chief Minister Edappadi K Palaniswami of the AIADMK says something and the next day the Leader of the Opposition and DMK President M K Stalin issues a rebuttal. It is the other way round the next day, and so it goes on.

The two leaders have perfected the art of keeping the focus on each other to the exclusion of the others in the fray -- like actor turned politician Kamal Haasan of the Makkal Needhi Maiam who is debuting from Coimbatore South. Or T T V Dhinakaran of the Amma Makkal Munnetra Kazhagam.

To find out which way the electoral wind blows in Tamil Nadu, A Ganesh Nadar/Rediff.com spoke to Dr Sumanth Raman, a seasoned observer of state politics.

Now that the battle lines have been clearly drawn in the state, who do you think has an edge -- AIADMK or DMK?

At the moment it is looking like a tight contest, but with an edge to the DMK front. I say this from the electoral arithmetic of the coalition parties.

Which of these two fronts has a better alliance in terms of vote-catching?

The alliance led by the DMK is on the stronger side. It is starting with 15% votes while the AIADMK is starting from scratch. In the absence of counter-polarisation, the minority votes may be crucial.

What do you think are the issues on which the electorate will vote this time?

I think it is a referendum on the performance of the AIADMK government. It is how Edappadi K Palaniswami has performed in the last four years. Whether people want him to continue or not?

Will the AIADMK be affected by Vijayakanth's Desiya Murpokku Dravida Kazhagam walking out of the alliance?

Marginally. It is not a major force any more. They would have probably added 1% to 2% to the vote. I don't think they would have made a big difference.

Will the AMMK and DMDK combine eat into the ruling party's votes, thus benefiting the DMK?

I don't know how many votes are still left with them.

Udhaynidhi, apart from being Stalin's son, is also a well-known actor. Do you think his entry into electoral politics will go against the DMK and open them to charges of promoting a dynasty?

Definitely it will open them to dynasty allegations, but people who vote for the DMK don't seem to mind that. There are dynasties across India and they are justified by political parties because dynasts get elected.

After making the usual noises, Stalin's brother M K Azhagiri seems to have fallen silent. How was he managed, you think?

The family must have prevailed upon him not to rock the boat before the elections.

We will only know what they promised him after the elections.

What is the outlook for the BJP's maiden tie-up with the AIADMK in the assembly polls? You were optimistic of the saffron party's chances the last time we spoke; do you think it is still a game-changer?

The BJP will have a presence in the assembly after many, many, years. Basically they are well aware that this is a long term game that they have to play in Tamil Nadu.

They are contesting only 20 seats. My gut feeling is that they will be seriously targeting half a dozen seats -- Coimbatore South, Tirunelveli, one or two in Kanyakumari and so on.

The AIADMK is now opposing the Citizenship (Amendment) Act, but the BJP has refused to relent. Will this impact the minority votes for the AIADMK?

The minorities are solidly with the DMK. This attempt to woo them back will not work.

When you compare the manifestoes of the two major parties, it is just a list of freebies. Will this not bankrupt the government?

Every manifesto in the recent past has been full of freebies. Parties and the people know that everything will not be delivered.

When something attractive is promoted it tends to attract the voters.

The DMK has promised 75% jobs for locals if they come to power. Considering that Tamil Nadu's economy owes a lot to freely available migrant labour, not to mention investments from outside, doesn't it fly in the face of reality? Do you think they will go through with it if they come to power?

It is a completely un-implementable scheme because Article 16 of the Constitution guarantees equality in employment. The matter is in courts where other states have tried to implement it.

If they come to power, they will announce it. If you crack down on industry they will shift lock, stock and barrel to other states and Tamil Nadu will be the loser.

Is Kamal Haasan on to a good thing in the company of Sharath Kumar and the Indhiya Jananayaka Katchi?

No, I don't think they will win any seat but they could take a higher vote share than the 3.7% vote share they got in the Lok Sabha polls in 2019.

Is the Sasikala factor overblown? Even Dhinakaran has not been able to capitalise on his stellar RK Nagar debut, why?

I think the Edappadi Palaniswami-led AIADMK acted with alacrity to cut down opportunities for Dhinakaran to take control or recapture the AIADMK when Sasikala was in jail.

I don't see them having a big impact in this election.

After more than 50 years why does the Tamil Nadu polity remain a bipolar one of the AIADMK and DMK, allowing no space for a newbie or third front?

There is space for a new force, but the people of Tamil Nadu have not found a new face outside these two parties in whom they could repose confidence. 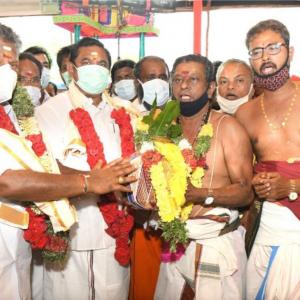