The Indian football team's disastrous performance at the international level continued as it went down 0-3 to Tajikistan in an international friendly in Khujand, Tajikistan, on Wednesday.

The Indians, playing an international friendly after a long time, gave a poor account of themselves as Tajikistan looked far better in front of 10,000-odd spectators who came in support of the national team.

The Tajik players used the wide areas to good effect as they made forays from the flank. India No 2 custodian Sandeep Nandy, who is nearly 39 years of age had a poor outing. 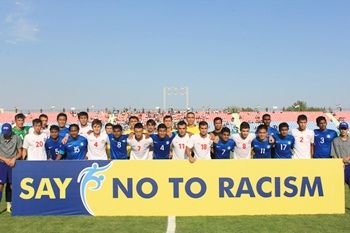 The home team was rewarded as early as the 12th minute when Fatkhullo sprinted down the left and sent a low centre, which was tapped in by an onrushing Nuriddin. Defenders Raju Gaekwad and debutant Arnab Mondal were not in position to stop Nuriddin from scoring.

Conceding an early goal made matters worse for Wim Koevermans's team, which was without two of its best players Syed Rahim Nabi and Subrata Paul --- both dropped from squad for missing pre-season training.

Tajikistan went up 2-0 when Vasiev Dilshod dodged past Nirmal Chettri, but was brought down by the latter just outside the box. Fatkhullo, whose assisted during the first goal, curled one perfectly and the ageing Nandy's desperate late dive wasn't enough to prevent a second goal.

The only time India had a clear sight at goal was in the 24th minute when left winger Clifford Miranda latched on to a long throw from Raju Gaekwad and unleashed a rasping left-footer.

However, the shot was directed straight at the goalkeeper and Tuychiev Alisher did not have any problems in punching the ball away.

Age seemed to have caught up with Nandy as the custodian pulled up a muscle and was replaced by Karanjeet Singh just at the stroke of half-time.

Koevermans made two substitutions in the second half, Lalrindika Ralte replacing Lenny Rodrigues and Arata Izumi coming in for Sheikh Jewel Raja.

At the start of the second half, skipper Sunil Chhetri, receiving a long-ball from Francis Fernandes found Miranda in the clear. Miranda did enter the box but his left-footer was way off the target.

In the 66th minute, Fernandes did the spadework to get past Nazarov Akhtam, entering the box from down the right flank. However, a horribly off-colour Sunil was nowhere in position to convert Fernandes's assist.

India’s captain was finally replaced by Dawson Fernandes while veteran Shylo Malswamtluanga came in for Miranda as the fifth substitution.

Dawson could have almost scored with his first touch but rival goalkepeer Alisher anticipated Arata's through pass and foiled the attempt.

The very next moment, Alisher denied Mehtab Hossain in the same manner.

Koevermans got big-bodied Robin Singh in the 77th minute as the sixth substitution in place of Hossain but that had little effect on the flow of the game. The home team scored the third and final goal in the third minute of stoppage time as Akhtam cashed in on another defensive lapse.

India next play arch-rivals Pakistan in their opening match of the SAFF Championship in Kathmandu on September 1.

Image: The India and Tajikistan teams before the kick-off 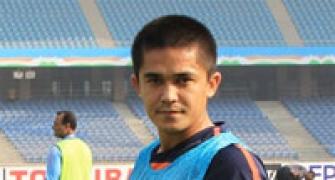 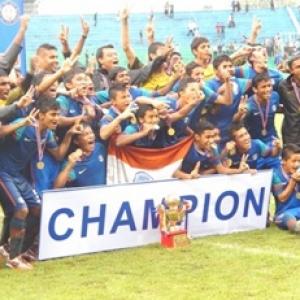 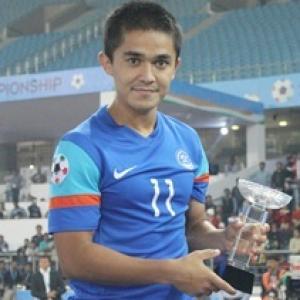 Chhetri keen to bank on Westwood's experience in I-League