News
Business
Movies
Sports
Cricket
Get Ahead
Money Tips
Shopping
Sign in  |  Create a Rediffmail account
Rediff.com  » News » Swamy targets Rajan again: 'He was painted as an angel who had come to save us'

Swamy targets Rajan again: 'He was painted as an angel who had come to save us'

Bharatiya Janata Party leader Subramanian Swamy on Sunday once again attacked Raghuram Rajan on the monetary policy, over a month after Prime Minister Narendra Modi had disapproved of his criticism of the
Reserve Bank of India chief. 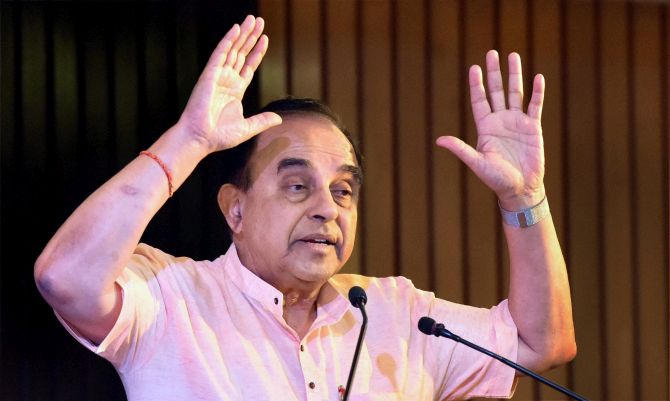 He also criticised the media of painting Rajan as "some angel" and him as a "devil".

"In the Raghuram Rajan case, the whole media was motivated by forces outside this country to support him. They said the stock markets will collapse if he goes. The stock markets are not collapsing, it's gone up in fact.

"He was harming the India economy by raising interest rates and making it impossible for small and medium industries to take loans from the banks," Swamy alleged.

"...So, it was as if I was some devil, and this man was some angel, who has come from abroad to save us," he said.

The Rajya Sabha BJP MP was speaking at a function organised in New Delhi by Virat Hindustan Sangam, to recall his political life during the Emergency era.

Prime Minister Modi on June 27 had disapproved of Swamy's attacks on the RBI governor and some top finance ministry officials, saying they were "inappropriate".

Rajan has already said that he will not seek a second term as the RBI governor.

During his talk, Swamy also alleged that "Two attempts were made on his life while he was abroad during the Emergency, on the order of Sanjay Gandhi."

However, later when asked what was the basis of his claim, he just said, "It was there in the newspapers of those days."

The senior BJP leader also claimed that Emergency was not something that was imposed suddenly.

"Mrs Gandhi had been planning something with the Soviets," he said.

Swamy also recalled his experiences during the Emergency days and his interactions with social leader Jai Prakash Narayan or 'JP' as he is famously known as.

"Freedom within our Constitutional framework cannot be compromised. And, I tell you, the next generation, that your mind is your protection against any emergency," he said.