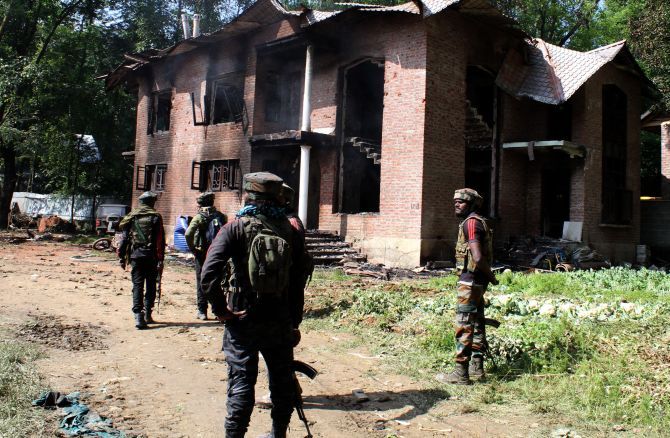 IMAGE: Soldiers inspect the house where four terrorists, including two special police officers who recently joined terrorist ranks, were killed in an encounter in Pulwama on Friday. Photograph: Umar Ganie for Rediff.com

Four Jaish-e-Mohammad (JeM) terrorists, including two special police officers who had deserted the force recently, were on Friday killed in an encounter with security forces in Jammu and Kashmir's Pulwama district, police said.

After receiving a credible input, a cordon and search operation was launched by the security forces at Panjran in Litter area of south Kashmir, a police spokesperson said.

He said during the search operation the hiding terrorists fired at the search party of the forces.

The fire was retaliated leading to an encounter in which the two listed terrorists and two special police officers (SPOs), who had recently deserted the police force and became members of the proscribed outfit JeM, were killed, the spokesperson said.

He said the listed terrorists have been identified as Ashiq Hussain Ganaie of Panjran Pulwama and Imran Ahmad Bhat of Arihal Pulwama.

The two SPOs were identified as Mohammad Salman Khan of Uthmulla Shopian and Shabir Ahmad Dar of Tujan Pulwama, the spokesperson said.

Police had on Thursday initiated investigation after the two SPOs failed to report back at district police lines in Pulwama district.

There have been several instances in the past as well when security forces personnel, including SPOs, have deserted to join terrorist ranks.

Giving details about the listed terrorists, the spokesperson said as per police records, Ganaie had a history of terror-related crime and was part of a group involved in planning and executing a series of terror attacks in the area.

Similarly, Bhat was also involved in several terror attacks on security establishments in the area and several cases of terror crime were registered against the duo, he said.

The spokesperson said incriminating material, including arms and ammunition, were recovered from the site of the encounter.

All these material were taken in the case records for the purpose of investigation and to probe their complicity in other terror crime, he added.

Source: PTI© Copyright 2021 PTI. All rights reserved. Republication or redistribution of PTI content, including by framing or similar means, is expressly prohibited without the prior written consent.
Related News: Pulwama, south Kashmir, Panjran, Jammu
SHARE THIS STORY
Print this article