Parties in Tamil Nadu including the Dravida Munnetra Kazhagam on Saturday strongly opposed the three language formula's continuation with add-on features proposed in the draft National Education Policy alleging it was tantamount to "thrusting" Hindi and wanted it junked. 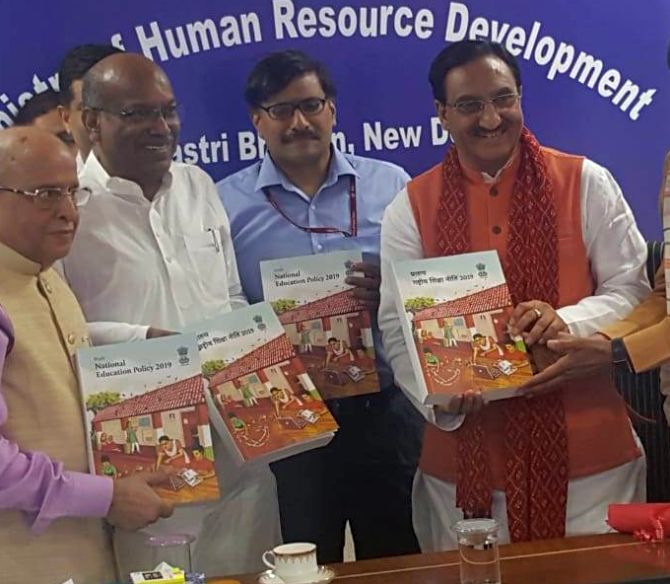 The Tamil Nadu government said it would continue with the two-language formula, seeking to cool frayed tempers.

Senior Congress leader P Chidambaram in a series of tweets in Tamil said: "what is the meaning of three language formula in schools? The meaning is they will make Hindi a compulsory subject..."

In another tweet, he said "If Hindi language is a compulsory subject its import is imposition of Hindi."

"The BJP government's real face is beginning to emerge..." he also tweeted.

The three language formula which bats for Hindi from "pre-school to class 12 was a big shocker," and the recommendation would "divide" the country, DMK chief M K Stalin said.

The draft policy prepared by a panel led by eminent scientist K Kasturirangan was unveiled on Friday.

Recalling the anti-Hindi agitations beginning as early as 1937 in Tamil Nadu, the DMK leader in a statement here said since 1968 the State was following the two-language formula of learning only Tamil and English.

The DMK would never tolerate imposition of Hindi and strongly oppose it. "Still, I believe that the Central BJP government will not make way for another language stir," he said.

The recommendations, the DMK said rather than lifting the standards of education has led to doubts that it had "ulterior motives" like imposition of Hindi on non-Hindi speaking States and thrusting Sanskrit in schools.

Recalling Jawaharlal Nehru's assurance that English would continue to be in use till such time desired by non-Hindi speaking States, he also pointed out that the State had enacted years ago a Compulsory Tamil Learning Act.

Demanding the Centre to reject the draft recommendations which was "imposition," of Hindi under the garb of three-language formula, he said his party MPs would voice their strong opposition in Parliament as soon as the House was convened.

Taking potshots at the All India Anna Dravida Munnetra Kazhagam for being what it called a "yes master," to the Centre, he wanted chief minister K Palaniswami to strongly oppose it and if not remove the words "Anna," and "Dravida," from his party's name.

The BJP must never even dream to implement three language formula in Tamil Nadu and such a "greedy dream," would lead to "catastrophic," consequences for them, he said.

Parties including the Communist Party of India and BJP's ally in the Lok Sabha polls, the Pattali Makkal Katchi too alleged the recommendation on the three language formula was "imposition of Hindi" and wanted scrapping it.

Makkal Needhi Maiam chief Kamal Haasan said "be it language or a project, if we do not like that, it should not be forced on us." He said his party would pursue legal options against it.

Education Minister K A Sengottaiyan told Puthiya Thalaimurai Tamil news channel: "There will be no deviation from the two-language formula followed in Tamil Nadu. Only Tamil and English will continue to be taught in our State."

The draft National Education Policy, 2019 available on the government website said the three-language formula will need to be implemented in its spirit throughout the country, promoting multilingual communicative abilities for a multilingual country.

Schools in Hindi speaking areas should also offer and teach Indian languages from other parts of India, it said.

The three language formula, followed since the adoption of the National Policy on Education 1968 and endorsed in subsequent years will be continued.

Since research now clearly showed that children picked up languages quickly between the ages of 2 and 8, and moreover that multilingualism has great cognitive benefits to students, children will now be immersed in three languages early on, starting from the foundational stage onwards, it said.

"...students who wish to change one of the three languages they are studying may do so in Grade 6, so long as the study of three languages by students in the Hindi-speaking states would continue to include Hindi and English and one of the modern Indian languages from other parts of India, ... while the study of languages by students in the non-Hindi-speaking states would include the regional language, Hindi and English."

Also, every student will take a fun course on "The Languages of India" sometime in Grades 6-8.

The draft policy said India also has "an extremely rich literature in other classical languages, including classical Tamil, as well as classical Telugu, Kannada, Malayalam, and Odia, in addition to Pali, Persian, and Prakrit; these classical languages and their literatures too must be preserved for their richness and for the pleasure and enrichment of posterity."

A choice of foreign languages like French and German, would be offered and available to interested students to choose as electives during secondary school.