News
Business
Movies
Sports
Cricket
Get Ahead
Money Tips
Shopping
Sign in  |  Create a Rediffmail account
Rediff.com  » News » So you think politics in India is complicated? Go to Sri Lanka!

So you think politics in India is complicated? Go to Sri Lanka! As Indian Parliament gets ready to convene the monsoon session -- and prepares itself for a washout -- it is worth considering what is happening in the parliament of its tiny neighbour, Sri Lanka.

A quick recap for those who haven't followed politics in Sri Lanka closely: In January this year, Mahinda Rajapaksa of the Sri Lanka Freedom Party was ousted from the post of president.

The elections were due two years later -- Rajapaksa advanced them in a political gamble he lost. Maithripala Sirisena, a minister in his government defected and became the Common Opposition Candidate, supported by a bizarre coalition of a large section of the SLFP (led mainly by Chandrika Kumaratunga, former president and senior party leader), Ranil Wickremesinghe of the United National Party, some leaders of the Sinhala Buddhist clergy and parties representing the Muslims and Tamils.

Because all the groups had disparate political ideologies, the COC decided to work on a rigid 100-day agenda drafted in consultation with the alliance partners. This is what in India we call the Common Minimum Programme. The idea was to dissolve parliament after that and hold general elections.

The main issues in the elections and after were two: Although Sri Lanka is a democracy, how could Rajapaksa foist so many of his relatives, friends and cronies in positions of power and authority? 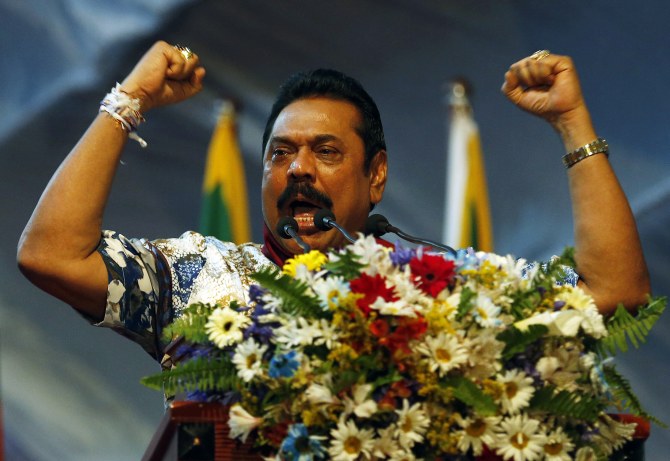 Former Sri Lankan President Mahinda Rajapaksa gestures as he addresses his supporters during a rally in Piliyandala.

There was clearly a systemic problem, Sri Lankans said, and plunged enthusiastically to dismantle the executive presidency that centralised powers in the president (via amendments in the constitution in the 1970s and 1980s, engineered by the wiliest politician Sri Lanka has known, President J R Jayewardene).

The second was: what place do the minorities have in Sri Lanka, especially after the 2009 military campaign that crushed the separatist Liberation Tigers of Tamil Eelam planned and executed by the Sri Lankan army and then defence secretary (and the president's brother) Gotabhaya Rajapaksa?

There were other complications. The nature of the alliance that elected Sirisena to power was so peculiar that the ruling party had a mere 43 seats in a parliament of 225 members in which the largest opposition party had 126 seats. Obviously, this was not tenable.

Before the executive presidency could be dismantled completely, Sirisena dissolved parliament, declaring that the new parliament would rebalance the system, which would have a president with the power to appoint the prime minister but with several autonomous institutions like the constitution council, an anti-bribery commission etc to advise him.

Meanwhile, after a short 'shock' phase, Rajapaksa bounced back and announced he would run for prime minister. But from which party? Much to the shock of the anti-Rajapaksa faction of the SLFP, Sirisena caved in -- in enlightened self-interest after many meetings with Rajapaksa supporters in smoke-filled rooms -- and said Rajapaksa could be an SLFP nominee.

Rajapaksa filed his nomination from Kurunegala. And guess what? Rajapaksa's son Namal and brother Gotabhaya were by his side when he filed his nomination. His other brother, Basil, the former economy minister who was jailed after corruption charges were filed against him and is currently out on bail, was not present.

Several human rights activists have said that if Rajapaksa wins the elections, the first thing he would do is to wind up all the complaints against him and his family members about 'disappearances' of political rivals and whistle-blowers.

Rajapaksa is not a pushover. In contrast to the right-wing free market proponent Ranil Wickremesinghe, he has a large phalanx of support in the conservative Sinhala Buddhist constituency, which recalls his populist schemes with nostalgia.

In the presidential election he got 90 out of 160 electoral districts and came out on top in nearly all Sinhala-dominated provinces. He won around 55 per cent of the Sinhalese vote. Sirisena won around 80 per cent of the Tamil vote and an even bigger share of the Muslim vote that gave him the edge over Rajapaksa.

If Rajapaksa comes to power, China will pop the cork. India is staying on the sidelines and waiting for the result.

The parliamentary election in Sri Lanka is scheduled for August 17, in a fiendishly complicated electoral system that is a combination of population-based proportional representation and party-based national lists.

But the man whose party gets the maximum members of parliament will become prime minister. If you thought politics in India was complicated, go to Sri Lanka! 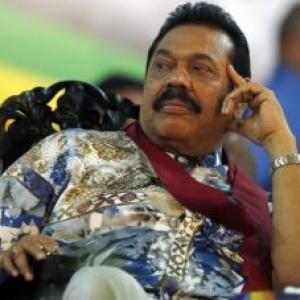