Sign in  |  Create a Rediffmail account
Rediff.com  » News » Aim is to win the hearts of people of J&K: PM Modi at Katra train launch 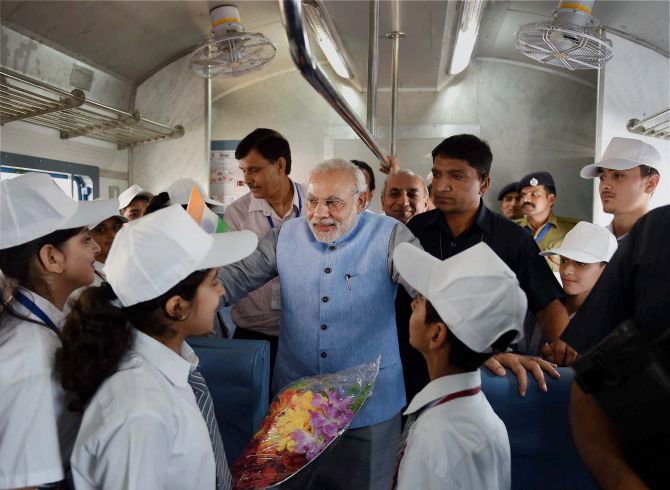 While inaugurating the 25-km long Vaishnodevi Express linking Katra-Udhampur-Delhi, Prime Minister Narendra Modi said it was his government’s duty to ensure the development of the region and ensured that the task would be achieved. Mukhtar Ahmad reports.

After a prolonged wait, Narendra Modi, on his maiden visit to Kashmir as prime minister, flagged off the train from Katra in Jammu, the base camp for Vaishno Devi shrine.

The 25-kilometre long rail link between the Mata Vaishno Devi Shrine base camp town and Udhampur will connect the Katra base camp town directly with the rest of the country for the facility of millions of devotees who come to pay obeisance at the shrine every year. The train has been built at an estimated cost of Rs 1,132.75 crore.

The train will traverse through seven tunnels and over 30 small and large bridges. There will be a small station -- Chakrakhwal -- between Udhampur and Katra. 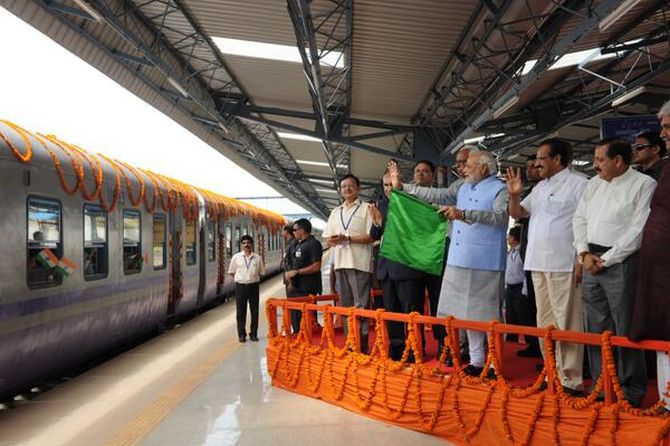 Speaking at the inauguration, Modi said, “Jammu and Kashmir has passed through very difficult time and it is the desire of every Indian to ensure that the state makes progress and the youth gets employment. It is our duty and we will do it,” he said.

Modi promised that there would be no obstacle in the way of development in the state and that this train would not just ease the journey of pilgrims to the popular shrine, but also aid development of the region. 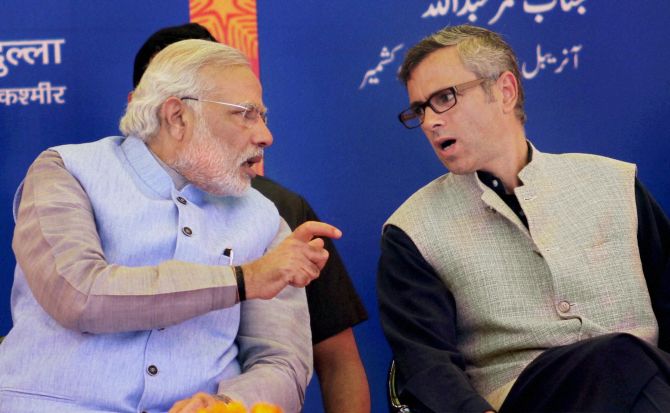 The PM also allayed the fears of the people of Jammu, who feel that the direct rail link to Katra will have negative impact on the development of their city, saying the “development of Jammu will not be stalled”.  Modi said the government will further enhance the rail connectivity in Jammu and Kashmir and that the Banihal rail line will be linked to the rest of the country directly.

Kashmir CM Omar Abdullah, also present at the function, underlined the importance of railways in the area and also raised the need for a Banihal link. He demanded an upgrade for the railway station in Jammu city.

Modi then flew to Srinagar where he chaired a security review meeting and also addressed troops at the Badami Bagh cantonment. 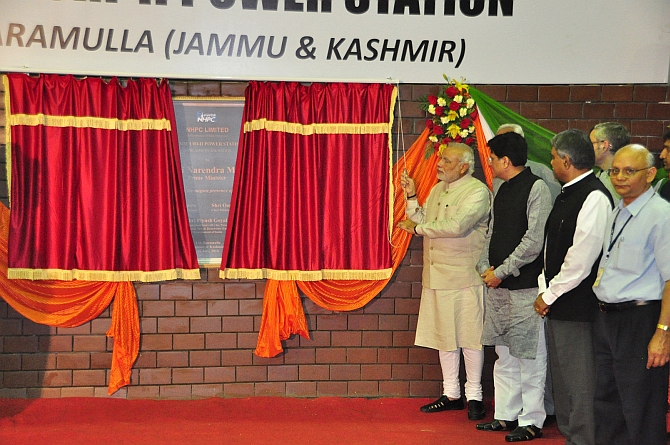 In the afternoon Modi inaugurated the 240 MW Uri-II Hydro Electric Project near the border town of Uri in north Kashmir Baramulla district.

Modi, according to an official statement, said, “The state is on the path of development and progress and I have visualised many big milestones in coming days." He also announced upgradation of the local Kendraya Vidyalaya from high school to higher secondary for which admission would be started from the coming session, the statement said.

Later, the Prime Minister flew back to Delhi.

Security was beefed up across the state owing to the presence of the PM. Several restrictions had been placed to maintain law and order.