Sino-India talks are 'something confidential': Jaishankar

The growth of India-China relationship in the last three decades was predicated on maintenance of peace and tranquility along the Line of Actual Control (LAC) and that disturbing the 'very foundation' of the ties is going to have consequences, External Affairs Minister S Jaishankar said on Thursday. 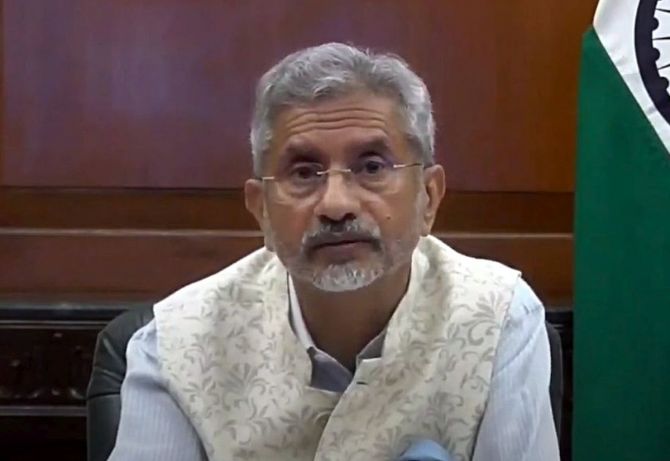 In an interactive session at the Bloomberg India Economic Forum, the external affairs minister also said the problem was not created by India, noting both sides are engaged in talks to resolve the over five-month-long military standoff in eastern Ladakh.

When queried about the outcome of the ongoing talks, Jaishankar said the 'discussions are going on and it is a work in progress'.

At the same time, he said there has been a troop build-up along the LAC and in many ways it has no precedence in the recent past.

He even talked about the military casualties at the de-facto border after a gap of 45 years, in a reference to the Galwan Valley clashes in eastern Ladakh in June.

"Discussions are on; what is going on is something confidential between us and the Chinese," he said when the moderator at the conclave pressed the minister to give a clear status of the border situation.

"There is not very much that I am in a position to say in public. I certainly do not want to prejudge it," he added.

Asked specifically whether India was looking at reducing the extent of trade ties with China in view of the border standoff, Jaishankar only said that disturbing the 'very foundation' of the relationship will have 'consequences'.

The external affairs minister said the trade as well as various other aspects of the relationship between India and China was predicated on maintenance of peace and tranquility along the border areas in accordance with various agreements and pacts the two sides sealed since 1993.

India and China are locked in a military standoff in eastern Ladakh for over five months.

Both sides have held multiple rounds of talks to resolve the standoff.

However, no breakthrough in disengagement of troops at the friction points in eastern Ladakh has been achieved so far.

Asked about the situation in Tibet as well as developments along the LAC, Jaishankar said, "I do not think we should get into other issues which frankly has nothing to do with the situation currently in Ladakh."

He said relations between India and China improved following signing of a series of agreements since 1993 on maintaining peace and tranquility along the border.

On economic ties, Jaishankar suggested that it is bound to be impacted by the border face-off.

"My concern is for many of us who have seen this relationship grow, if you disturb its foundation so to speak then you know you cannot be sort of impervious to the fact that it will have consequences.

"It is nobody's desire to have those consequences. But that problem in a sense was not created on our side," he said.

Though he maintained that the early restoration of peace and tranquility along the border would be good for everyone, but noted that both sides have been having trade issues for almost two decades.

"These are not new problems. I remember, I was ambassador in China from the middle of 2009. Even in 2009, we were concerned about lack of market access in China, about the non-reciprocal nature of trade, about the mounting trade deficit which to our mind was not a natural outcome of our comparative advantages," Jaishankar said.

He said though India's IT and pharmaceutical companies were present across the world, it was not the case in China.

"...but in the Chinese market, we were not able to make a dent at all. The trade issue has been a difficult conversation for more than a decade now," he said.

"In a sense, we have two independent autonomous issues here; one, the fact that the basis of cooperation has got disturbed by the disturbance to peace and tranquility in the border areas, and the other is that there are structural problems in the India-China trade," he said.

As the border standoff entered the sixth month, an early resolution to the row appeared dim with close to 1,00,000 Indian and Chinese troops remaining deployed in the high-altitude region and showing readiness for a long-haul.