The Supreme Court on Monday said people cannot block public road indefinitely and create inconvenience for others but declined to pass an interim direction on pleas for removal of anti-Citizenship Amendment Act protesters from Shaheen Bagh, the epicentre of demonstrations here for nearly two months. 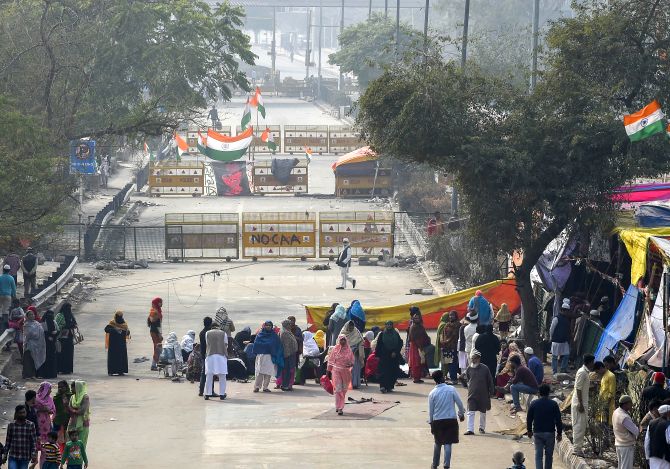 IMAGE: Muslim women offer namaz on a road near the site of the ongoing protest against Citizenship Amendment Act at Shaheen Bagh in New Delhi. Photograph: Kamal Singh/PTI Photo

As it observed that people are entitled to protest but it has to be done in an area identified for agitations and cannot be done on a public road or park, the court also took up the issue of an infant dying on returning home from Shaheen Bagh where his parents had taken him along.

"Can a four-month-old child be taking part in such (Shaheen Bagh) protests?" the court asked while warning two women lawyers for making 'explosive submissions' that children participating in the protests against the CAA are being called names, 'terrorist', 'gaddar' (traitor), 'Pakistani', in school.

The four-month-old baby had passed away in his sleep on the night of January 30 after returning from Shaheen Bagh.

"Don't make explosive submissions. Please do not make such statements. We do not want people to use this platform to further create problems," said a bench, comprising Chief Justice S A Bobde and Justices B R Gavai and Surya Kant, when two women advocates -- Shahrukh Alam and Nandita Rao -- started making submissions.

A bench comprising Justices S K Kaul and K M Joseph issued notices to the Centre, Delhi government and Delhi Police asking them to respond to the pleas seeking removal of protesters from Shaheen Bagh and ensuring smooth traffic flow on the Kalindi Kunj-Shaheen Bagh stretch.

When the counsel appearing for the petitioners urged the court to pass some direction since there was inconvenience to the public, the bench said, "It cannot be done ex parte. We will hear the other side."

"If you have waited for over 50 days, wait for some more days."

The top court posted the matter for further hearing on February 17.

"You cannot block the public roads. There cannot be indefinite period of protest in such an area. If you want to protest, it has to be in an area identified for protest," the bench said.

"There is a law and people have grievance against it. The matter is pending in the court. Despite that some people are protesting. They are entitled to protest," the court said, adding, "It should be done in an area which is designated for protests. You cannot create inconvenience for the people."

The apex court said the protest at Shaheen Bagh has been going on for long but it cannot create inconvenience for others.

"Can you block a public road? You cannot block it. Suppose there is a public park, you cannot hold protest there," the bench said.

The apex court was hearing an appeal filed by advocate Amit Sahni, who had approached the high court seeking directions to the Delhi Police to ensure smooth traffic flow on the Kalindi Kunj-Shaheen Bagh stretch, which remains blocked by anti-CAA protesters since December 15.

Besides Sahni, advocate Shashank Deo Sudhi, appearing for former Bharatiya Janata Party MLA Nand Kishore Garg, also made a plea for some directions for removal of the protesters.

When the bench headed by Justice Bobde said it was taking suo motu cognisance of the letter written by a national bravery award winner Zen Gunratan Sadavarte, seeking that minors be barred from participating in any type of protest and agitation, advocates Shahrukh Alam and Nandita Rao interrupted claiming that children participating in the protest are being called names, 'terrorist', 'gaddar' (traitor), 'Pakistani', in schools.

The intervention by the advocates did not go down well with the bench, which said: "We will not hear you on this. Don't make such types of irrelevant arguments."

Solicitor General Tushar Mehta opposed them saying, "Can it be a ground for sitting on dharna with a four-month-old child or can they oppose this on the ground that children are being called names like gaddars in school."

The bench asked, "A four-month old infant had gone to protest? But tell us which four-month-old child goes on its own to protest sites."

The bench said the two lawyers were deviating from the main issue of which it has taken cognizance of.

The bench made it clear that it was not stifling anybody's voice.

"We are not stifling any voice. This is a properly constituted suo motu proceedings by the Supreme Court of India," it added.

"We have the highest respect for motherhood, and highest concern for children. Don't make arguments to raise and create guilt."

"A child has died. Instead of causing more trouble, mothers should back this cause," the bench said.

The lawyers had submitted that "these women (who are sitting at protest site) live in slums and have no option but to take their children along to the protest site".