Well ahead of the high stakes assembly polls in Telangana next year, Prime Minister Narendra Modi and ruling Telangana Rashtra Samiti supremo K Chandrasekhar Rao on Thursday took apparent potshots at each other, even as the Telangana Chief Minister gave a miss to the former for the second time in a year during an official visit to his state. 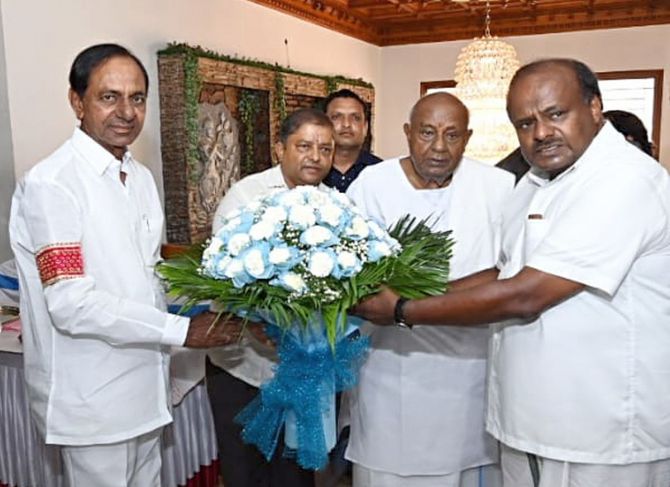 While Modi lashed out at family politics saying 'parivaarvadi' is democracy's "greatest enemy," Rao, who flew to Bengaluru to meet former PM HD Deve Gowda, said despite 'bhaashanbaazi' (rhetoric), industries were closing down, the nation's GDP was crashing and the rupee was falling drastically compared to the US dollar and said all sections of the society were suffering.

Modi slammed "family-parties" in the country, including the ruling TRS in Telangana, without naming it, even as he expressed confidence the Bharatiya Janata Party would storm to power in the state in the next assembly elections, elated over its wins in two recent assembly bypolls in the state, besides putting up a very good show in the Greater Hyderabad Municipal Corporation election in 2020.

In another apparent jibe at KCR, as Rao is known, he said the "superstitious people can never do justice to Telangana's potential" and said that despite being a religious person, UP CM Yogi Adityanath believed in science.

"The air of Telangana that I am experiencing after coming out of the airport here, and the scene that I am witnessing, when I see your enthusiasm in this heat, I can say that our struggle is paying off," Modi said while addressing party workers at the Begumpet airport, after arriving to attend an official engagement in Hyderabad.

KCR, who is on a national tour with an apparent eye on the 2024 Lok Sabha elections for a bigger role and also keen to retain power in Telangana next year, travelled to neighbouring Bengaluru to meet Gowda and also said some "sensational news" was expected later on a possible grand alliance.

Rao had avoided meeting Modi earlier this year, citing ill-health, when the PM was in Hyderabad to inaugurate the 'Statue of Equality,' of saint Ramanujacharya.

BJP's win in different elections in the recent past is a clear indication that people have made up their mind to bring about a change in Telangana, Modi said, adding, the saffron party "is certain in Telangana now," he said.

Modi hit out at family-run political parties, saying they were not just a political problem of India but "the biggest enemy of the country's democracy and its youth."

"Parivaarvadi (family-run) parties are not only a political problem of India. 'Parivaarvad' and 'Parivarvaadi' parties are the biggest enemies of both the country's democracy and the youth," Modi said, in an apparent reference to the ruling Telangana Rashtra Samithi.

Telangana people are watching how family-run parties are interested in their own welfare. These parties never care about poor people's problems, he further charged.

The country has seen how corruption becomes the face of political parties dedicated to one family, Modi said, adding, the youth don't get the opportunity to enter politics due to family rule, which he alleged crushes every dream of youth.

Therefore, "liberation" from 'parivarvaad' and family parties is a resolve and also a "naitik andolan" (moral agitation) for the 21st century India, he said.

BJP's fight is for the future of Telangana and also for its self-respect and identity.

Recalling that thousands of people had sacrificed their lives for the sake of a bright future for Telangana during the decades-long separate statehood agitation, Modi said the agitation was not for one family to crush the dreams of Telangana's development.

The Telangana agitation was not for one family to make new conspiracies to destroy the state by adopting various means, he said. Telangana was carved out of the erstwhile unified Andhra Pradesh in 2014.

Modi lauded BJP workers in Telangana, noting that the entire country is watching their ability as they fight against highhandedness and exploitation.

"Those people are involved in making Telangana a hub of appeasement. We want to make Telangana a technology hub," he said.

Observing that Telangana needs an honest and progressive government, he said BJP alone can provide such a government. Modi, who spoke about the importance of technology, said some people have become slaves of superstition even in the 21st century.

They can cause loss to anybody in their superstition, he said.

In an apparent attack on Rao, he said "superstitious people can never do justice to Telangana's potential".

"We have to save our Telangana from such superstitious people," he said.

Recalling that a ticket was introduced for his public meeting in Hyderabad in 2013, he said the incident had turned out to be a turning point and that he got an opportunity to serve the country.

Modi's veiled but sharp attack on the ruling TRS came as the ruling party and BJP gear up for next year's assembly elections. TRS has been ruling the state since 2014

Apparently hitting back at Modi, Rao said despite rhetoric, the country was suffering on the industrial and economic fronts.

"Today no one is happy, be it farmers, Dalits, tribals. Who is happy today. Situation is worsening day by day. What is the reality other than rhetoric (bhaashanbazi) and promises. Industries are getting closed, the GDP is crashing, inflation is spiralling, the rupee has fallen completely. Never in history has the rupee fell to such a low level compared to the US dollar," Rao pointed out, while speaking to reporters in Bengaluru after meeting Gowda.

On the prevailing situation, he said the country has enough resources, yet it was suffering due to shortage of water, electricity and irrigation even after 75 years of independence while many nations that secured freedom along with India are way ahead. 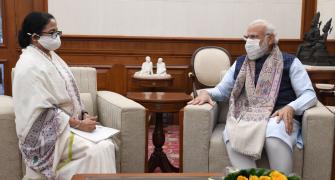 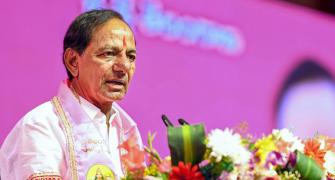 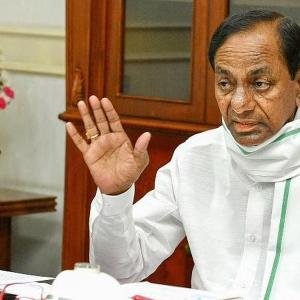 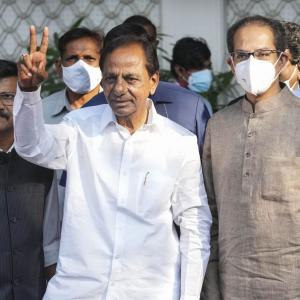