Even as its chief Uddhav Thackeray accompanied the Prime Minister for 'jal pujan' ceremony of Chhatrapati Shivaji memorial, Shiv Sena on Saturday appeared unhappy with ally BJP, alleging that it has "hijacked" the occasion to take political benefit. 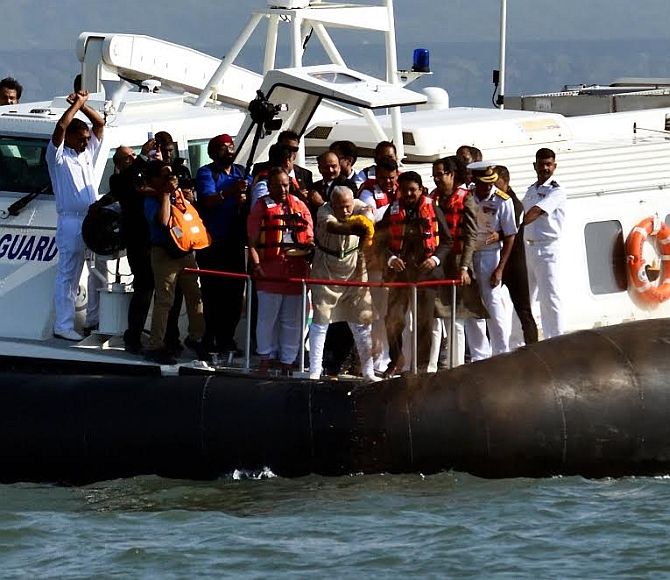 It also took a swipe at BJP over the Ram Temple issue, saying it should admit its "failure" as it has not been able to build the promised temple in Ayodhya despite the huge majority in Lok Sabha.

"The BJP should not forget this memorial is a dream of every citizen of Maharashtra. The previous government (of Congress-NCP) also tried to start work on the memorial though it was unsuccessful for reasons best known to them," said Sena spokesperson Manisha Kayande.

"When the memorial is being built with Government money, BJP should remember this (jal pujan or stone laying ceremony) is a government programme and all parties of the 'Mahayuti' (grand alliance) should be treated with equal respect," she said.

Kayande said "the trend of BJP hijacking events, whenever it is in power, is in bad taste and does not go down well with public".

The BJP tried similar "antics" at the inauguration of Ram Mandir railway station here, where its workers shouted slogans in support of the Prime Minister, she said.

"Before elections, they showed people big dream of building a Ram Temple in Ayodhya, which they have failed to do despite having absolute majority in the Lok Sabha. Now, they should accept their failure (for not building the temple)," the Sena spokesperson said.

Earlier, Modi performed 'jal pujan' in the Arabian Sea for the Rs 3,600-crore memorial dedicated to the 17th century Maratha warrior king, who is a revered figure in Maharashtra. He was accompanied by Uddhav among others.

The party is hoping that the issue will work ints favour in run up to the Brihanmumbai Municipal Corporation polls likely in early 2017.

Sena-BJP relationship has been strained ever since the two parties parted ways ahead of Maharashtra assembly election in 2014. The two reunited post-election but Sena has been sulking since it has been reduced to a junior partner in the state.

Thackeray's party has often been critical of the state and central governments though it is a part of the BJP-led NDA.