The skies over many parts of Gurugram turned dark on Saturday as swarms of locusts descended on the town, but the migratory pests are likely to spare the national capital for now, officials said.

The dark cloud of locusts, spread across two kilometres, crossed the suburban city, touched the Delhi-Gurugram border but did not enter Delhi.

"The swarms moved from west to east. They entered Gurugram around 11.30 am," said K L Gurjar of the Locust Warning Organisation, ministry of agriculture.

The pests, he said, were headed towards Palwal in Haryana.

Alarmed at the invasion of the locusts, which settled on trees, rooftops and plants, many residents of Gurugram shared videos from their high-rise perches.

Swarms of locusts were seen in condominiums such as Beverly Park, Garden Estate and Heritage City as well as buildings in Sikanderpur in the high-rise town bordering Delhi.

In May, India battled a devastating desert locust outbreak. The crop-destroying swarms first attacked Rajasthan and then spread to Punjab, Gujarat, Maharashtra and Madhya Pradesh. 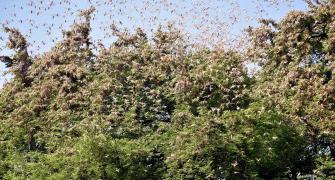 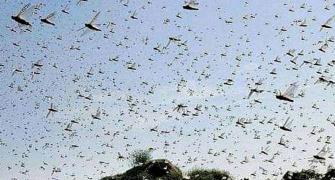 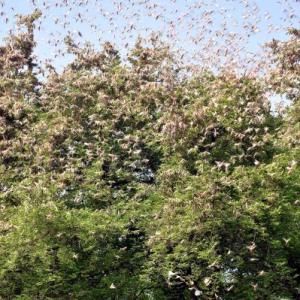