Even as the nation fights the coronavirus pandemic, there is a new panic, this time over the swarms of locusts that have so far damaged crops in Rajasthan and Madhya Pradesh and were heading into Uttar Pradesh and Maharashtra.

Although locust swarms flying into the country is an annual feature, this year it has come two months early and so was unexpected for this time.

The Government of India's Locust Warning Organisation under the ministry of agriculture and farmers welfare has been in constant touch with the affected states to curb the menace before it spreads further.

Officials say this year's locust attack is the worst they have seen in 26 years.

Dr K L Gurjar, deputy director of the Directorate of Plant Protection, Quarantine and Storage at the ministry of agriculture, who is busy coordinating the counter-measures with states, tells A Ganesh Nadar/Rediff.com that "there are eight to ten swarms" in the country.

"They are spread over three states -- Rajasthan, Madhya Pradesh and Uttar Pradesh," he adds.

What is different about this year's locust attack?

This year they have come two months early. They first come to Iran, they breed there in spring. Then they come to Baluchistan. They come to India in summer.

How does the government tackle them?

We are spraying them with chemicals. We do that at night and in the early morning hours.

How many swarms are currently in India?

Approximately there are eight to 10 swarms. They are spread over three states in Rajasthan, Madhya Pradesh and Uttar Pradesh.

They come every year. Last year also they had come, but not so early.

What can be done to prevent the attacks?

We are continuously monitoring them. When they settle down at night, a team from the central government and state government work together.

We find them and then spray them with chemicals.

What is under risk, apart from crops? Do they come into cities, attack people etc?

Can they be genetically modified to make them more ferocious?

No, they are not genetically modified. There are growth regulators that can be introduced at the infant stage. But that is not available in India.

Can they be part of a bio attack?

No, that is not possible.

What is the locusts's life span?

Their lifespan is 90 days.

How long do these attacks last?

They normally last for one or two months when the migrations will continue. It depends on how many enter.

If they breed here, then it will last longer.

What is the value of the total damage they cause?

Presently there are no standing crops. So they have damaged only vegetables. 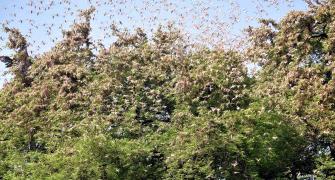 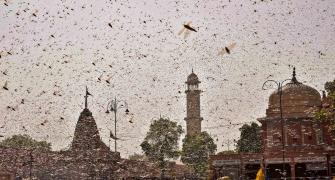 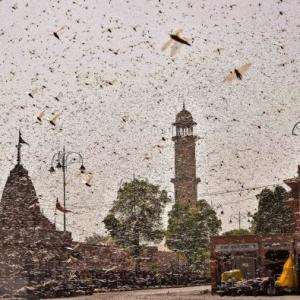