Tamil star Suriya's 7aum Arivu was about a virus from China sent to Chennai to wreak havoc while Kaappan was about a locust attack the hero prevents in time -- both films in a sense foresaw what was to come, observes N Sathiya Moorthy.

At a time when the nation is hurtling from one crisis to another, from the pandemic with its origin in China and the desert locust that threatens to destroy crops across north India, it may come as a surprise to know that Tamil cinema has shown it all in recent years.

While 7aum Arivu (Seventh Sense, 2011) was about a China-fed pandemic in Chennai city, Kaappan (Protector) from 2019 was about a multi-sector industrialist setting off lab-generated locusts to destroy crops, to force farmers to sell their paddy lands for him to set up a factory.

As coincidence would have it, Suriya is the protagonist in both films, the first one directed by A R Murugadoss and the other by K V Anand. Both are big-budget, multi-lingual film-makers, with Bollywood hits, too, to their credit.

Despite being hugely commercial, in typical Kollywood style, the two films also show the kind of research that the writers have done to make the storyline read authentic and plausible.

7 aum Arivu was the story of Sudha, a student of genetics (played by Shruti Hassan), locating circus artiste Aravind (Suriya) a descendent of the fifth century Buddhist monk-prince, Bodhidharma of the Pallava dynasty of Kanchipuram in Tamil Nadu, who was sent to China by his guru to cure the local population of a pandemic -- and also to stop it from spreading into India.

Sudha's aim/ambition is to trace the DNA of Bodhidharma (Chinese still call him 'Damo'), and recreate him, so that his powers of medicine and mind control could be of use to humanity in troubled times.

Incidentally, Bodhidharma is credited with taking Chan Buddhism to China, and is also believed to have given physical endurance training to monks of the Shaolin monastery, leading to what is now popularly known as the martial art of Shaolin kungfu.

As it turns out, even as Sudha is seeking to locate and then convince Aravind to cooperate with her in his research, contemporary China despatches their agent, Dong Lee (played by Johnny Tri' Nguye'n, the Vietnamese film actor and choreographer), to Chennai to destroy India from within.

If looks could kill, Dong Lee's could as throughout the film his powers of hypnotism, to make people kill others, is in full play.

Dong Lee injects a street dog with a virus, which then spreads like a pandemic and kills more people (stopping, thankfully, with Chennai). The rest of the film is about how Sudha convinces Aravind about his own hidden powers as Bodhidharma for him to cooperate with her -- and then destroy Dong Lee and his destructive project, 'Operation Red'.

Malayalam superstar Mohanlal plays Varma who is killed by the villain (played by Bollywood's Boman Irani), that too on Aravind's watch.

<p">With the advent of the current locust swarms across Rajasthan, Madhya Pradesh and Uttar Pradesh, film-maker K V Anand has gone on record to say how he had researched into the locust attacls, to make them to look possible and authentic (even to the average film-goer).

Likewise, A R Murugadoss detailed his own research on Bodhidharma and his powers of the mind and bod.

Coming as they have done in the decade of China-origin coronavirus and now the locust-swarm (which is thankfully considered a natural and a none-too-infrequent phenomenon), the social media talk about the two films have gained greater currency than even when they were first released.

There is fine appreciation for the two film-makers, and half-jocular questions are being asked if either or both of them had a premonition.

But then, Suriya is not the only actor to have done sci-fi movies where contemporary ideas have got a mention.

Superstar Rajinikanth's 2.0, a multi-lingual released in 2018, is all about mobile telephony waves causing the death of birds, and how the spirit of an ornithologist, who commits suicide for the cause, takes revenge on politicians, business men and mobile-users as a community.

But, then, long before the current genre of Tamil films of the kind, English fiction writers have predicted the use of anthrax and belt-bomb in their stories, as if they were giving new ideas to real-life antagonists of the future.

Frederick Forsyth's The Negotiator(1989) has a brief but pertinent mention of the belt-bomb, the like of which was put to actual use not long after, in the Rajiv Gandhi assassination in May 1991.

As is doing the rounds on social media, popular Tamil writer, the late 'Sujatha' Rangarajan, an electronic engineer who headed the BEL team that fathered the nation's first electronic voting machines, had written a short sci-fi piece on how the world would be like 30 years hence.

The piece, doing the rounds long after his death in 2008, talks about a new-world machine 'Navigator', available for a high $4,000. It is a laptop, mobile, TV and all other office equipment like printer and scanner all rolled into one -- as he saw may become available in 30 years.

With it you can 'work from home' without having to rush through the busy traffic, to and from office (something that the pandemic shutdown has taught us all).

'But, then, you also will have to keep seeing your wife's face all the time,' it ends, again a reflection of some of the current social media memes that take a swipe on the household chores, and unfairly so. What makes 7 Aum Arivu so hot this Diwali 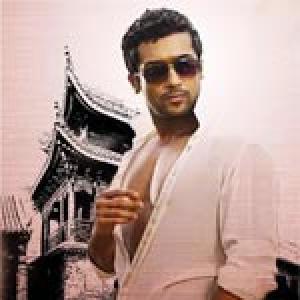