Security forces on their toes to maintain peace 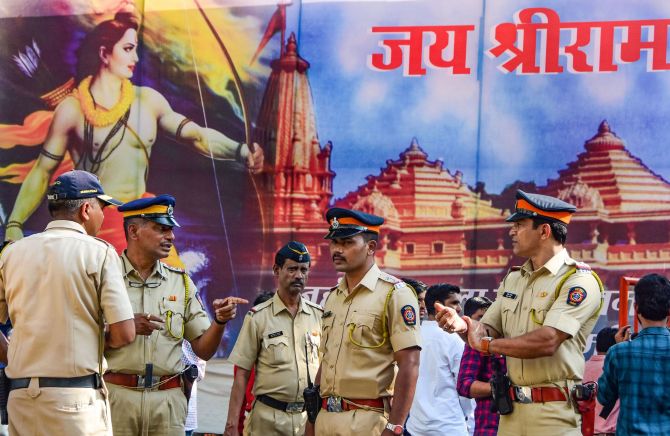 IMAGE: Mumbai Police stand in front of a Lord Ram banner outside BJP headquarters on the day of Ayodhya case verdict, in Mumbai, on Saturday. Photograph: PTI Photo

An overwhelming presence of men and women in 'khaki' on ground, intensive patrolling and monitoring of various social media platforms were the drill followed by state police forces to check any inflammatory or mischievous act in the wake of the Supreme Court verdict that cleared the way for creation of a Ram temple in Ayodhya.

The Union home ministry, from its North Block office atop the Raisina Hill in New Delhi, kept a 'constant and engaging' vigil across the country with central paramilitary forces, intelligence agencies and state police forces in toe.

Union home minister Amit Shah called a meeting with National Security Advisor Ajit Doval, home secretary Ajit Bhalla, Director of the Intelligence Bureau Arvind Kumar at his residence even as he talked to some chief ministers such as Yogi Adityanath in Uttar Pradesh and Kamal Nath in Madhya Pradesh among others informing them about the support and available reinforcements, in case they needed any.

Police forces in various states undertook prohibitive measures like clamping Section 144 of Code of Criminal Procedure to prevent unlawful assembly and undertaking patrolling in sensitive and busy market areas to send a stern message against elements who may attempt to use the apex court's verdict to provoke sentiments of the common people.

"The situation in the entire state is absolutely normal. There has been no untoward incident till now. We had directed our field officers to keep patrolling and we are also preparing for police management for the festivals that will begin from Sunday," UP Director General of Police (DGP) O P Singh told PTI.

Additional DGP (Law and Order) of UP P V Ramasastry said around 80 cases have been registered in the past 10 days against people using social media platforms like Twitter and Facebook to spread wrong information with an aim to trigger communal riots in the state.

A strong posse of 40 armed CAPF companies (about 4,000 personnel) were put on full operational readiness in UP and areas in and around Ayodhya district, a senior CAPF officer said. 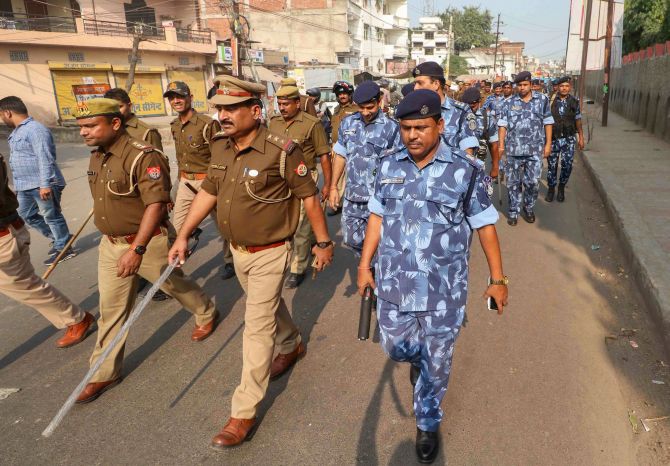 IMAGE: Police personnel and RAF patrol after the verdict on Ayodhya case, in Lucknow, on Saturday. Photograph: PTI Photo

The law and order situation in Ayodhya has been normal and people are carrying out normal activities along with pilgrims who come to the town, another official said.

A reserve of about 20 CAPF companies is on standby and can be mobilised quickly to any part of the country, he said.

"Delhi Police will initiate strict legal action against mischief mongers or those found indulging in any activity which may adversely affect the peace and public order.

"Activities on social media platforms will be under observation and Delhi Police advises that such platforms should be used with discretion, and users should restrain from spreading any disharmony, hatred or enmity," the police said in an advisory.

A 30-year-old man was arrested for putting up an objectionable post related to the case on the social media in Rajasthan's Bikaner district.

Restrictions were imposed by the police in the entire Union Territory (UT) of Jammu and Kashmir as a precautionary measure.

While the West Bengal government put all the police stations on high alert in view of the verdict, the Gujarat police establishment was on high alert to check occurrence of any untoward incident.

The Himachal Pradesh police issued a warning against the circulation of fake news in the wake of the verdict.

Strict penal action will be taken against those who indulge in circulation of fake news, morphed pictures, doctored videos or any inflammatory material, said Solan Superintendent of Police Madhusudan Sharma in a statement on Saturday morning.

All the central police and intelligence agencies kept exchanging notes on the developments in their areas and this drill will continue for the next few days, the senior official quoted above said.

He said state police forces are making extensive use of data analytics, technology tools like CCTVs and drones and tracking social media to ensure that if anything inflammatory or provocative is written or published over these platforms it is removed and the guilty are acted upon.