How the violence was unleashed at Delhi's Ramjas college

'At Ramjas too, slogans for Kashmir's azaadi were heard. We won't let DU become JNU.' 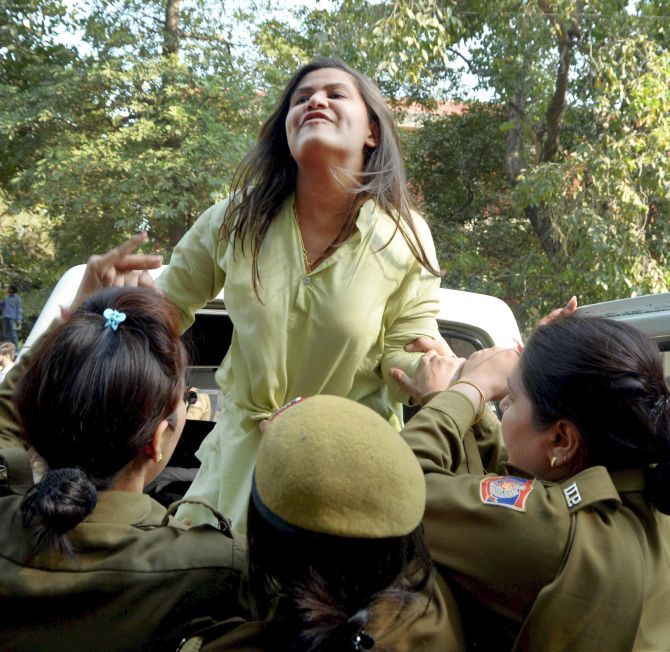 All the stones and glass bottles hurled as projectiles amidst jingoistic chants of Bharat Mata ki Jai remain mute reminders of the havoc unleashed by a handful of activists, suspected to be members of the Bharatiya Janata Party-affiliated students body Akhil Bharatiya Vidyarthi Parishad, in the Ramjas College campus over its  invitation to JNU students Umar Khalid, who is facing sedition charges, and Shehla Rashid to address a seminar on 'Culture of Protests'.

This despite the fact that the college authorities had only 48 hours ago withdrawn the invites and cancelled the event, giving into the ABVP's demand.

Alleged ABVP activists seemed hell-bent on playing out a second season of patriot games over the seminar invites, a reminder of the protests that rocked the Jawaharlal Nehru University last year. Satinder Awana, former DUSU president and ABVP member, told the Hindustan Times, "At Ramjas too, slogans for Kashmir's azaadi were heard. We won't let DU become JNU."

At the receiving end of the ABVP's ire were hapless teachers and students.

A student, Burhan Qureshi, was hit on the head by a flying glass bottle. Rudrashish Chakraborty, a member of the Democratic Teachers Front, alleged that ABVP members threw chairs at two teachers -- Suvitra from Deshbandhu College and Mousumi Bose of Ramjas College.

Ramjas's English professor Prashanto Chakrabarty, who had to be taken to the university health centre and then to the Hindu Rao Hospital for treatment after being attacked from behind, was pushed to the ground, kicked and beaten up by suspected ABVP activists. 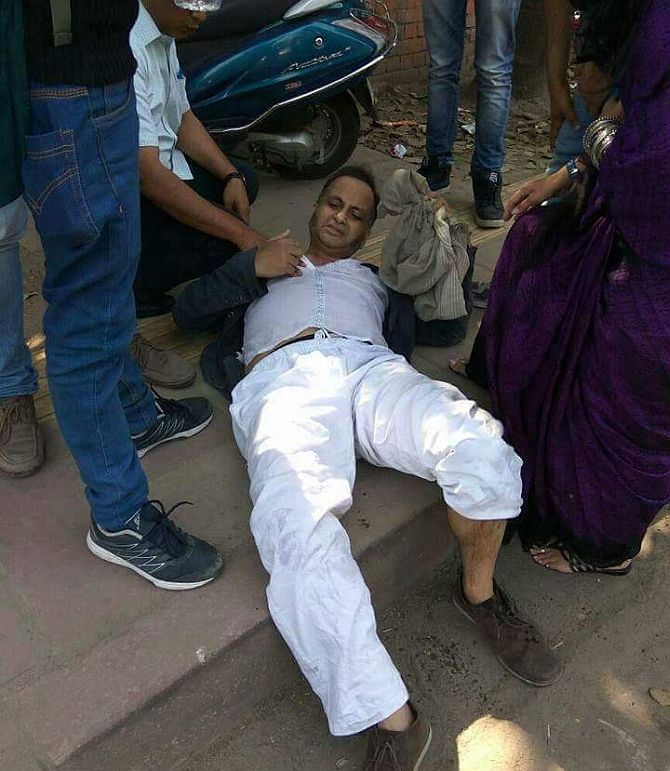 IMAGE: Prof Prashant Chakraborty of the English department being helped to his feet by students after he was attacked. Photograph: @jimmy9_girl/Twitter

"Around 15 people beat me up when I went to join the students. They picked me and tried to strangulate me with my muffler. All the while the police stood as mute spectators, watching me get thrashed," Prashanto told media-persons later.

In a Facebook post on Thursday, the English professor said, "I am deeply anxious about my colleagues and students in this rapidly unfolding scenario. My physical health condition apart, it is obvious to everyone that it is a far better idea to organise systematically, rather than being martyrs, against a powerfully organised force which also enjoys full State support."

AISA members Kawalpreet Kaur told the Hindustan Times that several female students had complained that they were touched inappropriately during the clashes.

Shehla Rashid, former JNUSU vice-president, too was injured, and was left with a bleeding ankle.

"What happened today (Wednesday) was fascism in action. I thought I would be killed when ABVP members dragged me in full view of the Delhi police. This is an attack on the idea of a university by the ABVP. We were attacked, the police did nothing. Our students were bleeding. They hurled bricks at us, they pulled our hair and used derogatory language against women. The ABVP is saying that they protested because anti-national students from JNU were coming to spoil Delhi University. I can safely say that, barring a handful, all students who had gathered for the march were from DU," she told The Hindu.

Khalid, who couldn't make it for the event, said, "The protest by the ABVP had nothing to do with me being invited to Delhi University. The problem they had was with the freedom of expression and the dissenting voices that would speak at the literary event."

The clashes took place around 1pm on Wednesday and the police could only bring the situation under control five hours later. A group of students were also locked up allegedly by ABVP activists for four hours in the college campus. 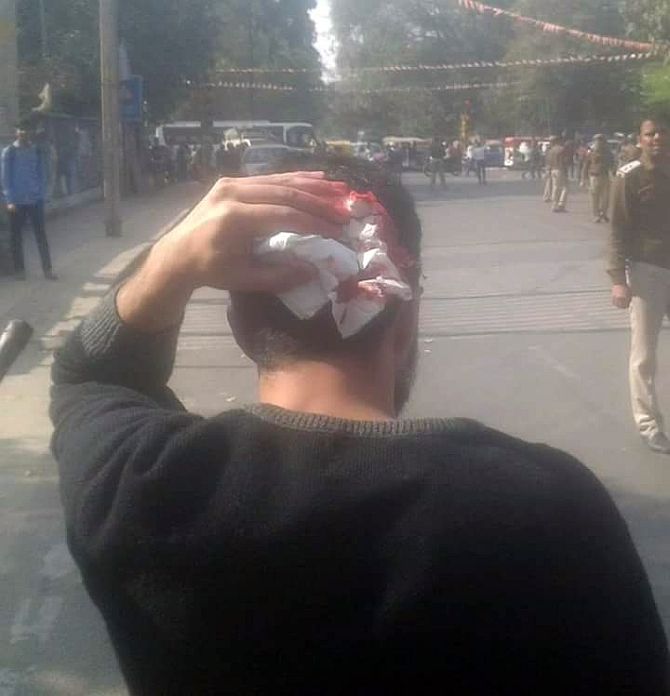 IMAGE: An MPhil scholar at the Delhi School of Economics was among those hit with a stone by suspected ABVP activists. Photograph: @jimmy9_girl/Twitter

A section of students and teachers had planned a march to Maurice Nagar police station, demanding action against those involved in the "vandalism" in the college campus the day before.

At this point, some Left-affiliated All India Students Union members tried to barge inside the college to "rescue the captives", resulting in the clashes.

Later, The Hindu reported, the students led by the AISA managed to head towards the Maurice Nagar police station with the police forming a human chain around them. This, however, failed to act as a deterrent as the students were attacked again. This time, it was outside SRCC when ABVP members cut across the Arts Faculty and intercepted the march. The tense situation continued till the two groups reached the police station.

Both groups alleged they were assaulted by the other. The police detained around 80 students.

Reacting to the violence, Amnesty International India's executive director Aakar Patel said in a statement, "Universities are supposed to be safe spaces for debate and discussion. But the events at Ramjas College are a shameful reminder of how intimidation and threats continue to restrict free speech on university campuses. Authorities need to protect academic freedom, which is crucial to the right to education."

Many Ramjas students who had organised the event said they were afraid.

"Our own classmates singled us out in front of ABVP men and threatened us with dire consequences. We are wary of going back to college," Rudra Bhushan, a third-year student, told the Times of India.

The ABVP though denies inciting any violence. 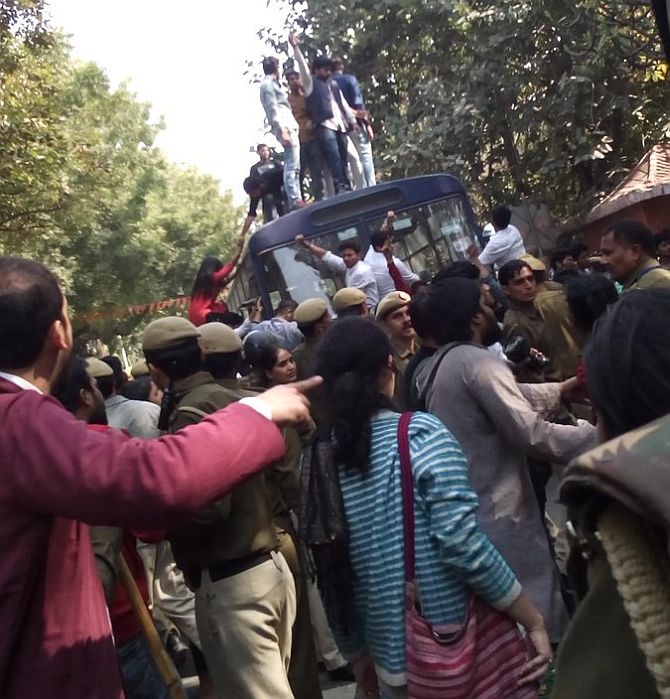 IMAGE: Detained ABVP students stand on top of the Delhi police bus after they were detained at Ramjas college in New Delhi. Photograph: @jimmy9_girl/Twitter

"We do not resort to stone pelting. These anti-nationals have learnt stone pelting from Kashmir. We don't do such things," ABVP member and and ex-JNUSU joint secretary Saurabh Sharma told media-persons when asked about allegations of violence by ABVP cadres.

On Wednesday evening, the ABVP issued a statement blaming AISA students for the violence. It said: "It is a shame that the communists once again resorted to their cheap tactics based on creating media spectacle. These shameless creatures pelted stones at innocent audience in Ramjas college yesterday. They followed up by repeated acts of violence today.

"People like Umar Khalid are spearheading such mob violence which must be met with seriously by the police. Those involved in encouraging such violence should be booked immediately."