As Makkal Needhi Maiam founder Kamal Haasan on Wednesday reiterated his intention to join hands with his contemporary 'Superstar' Rajinikanth politically, the ruling All India Anna Dravida Munnetra Kazhagam continued to target the duo, calling it a 'mirage' and insisted the actors can't harm the party's prospects. 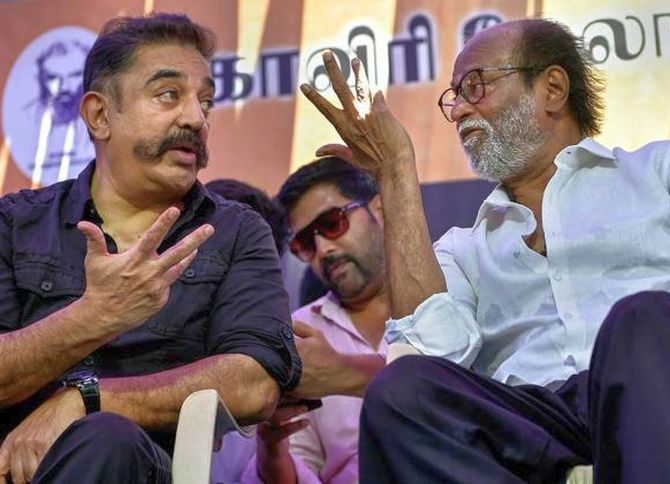 Though Haasan expressed his willingness to partner with his four-decade old cinema colleague, he made it clear he would do so "only if required" and for the sake of Tamil Nadu.

While AIADMK coordinator and deputy chief minister O Panneerselvam said the duo's possible partnership would not affect his party, his cabinet colleauge D Jayakumar said the duo was like 'mirage' that would "disappoint" the person believing it to be water.

He also likened them to an 'illusion.'

Haasan's comments on joining forces with Rajinikanth came a day after both actors hinted at coming together keeping in mind Tamil Nadu's welfare.

"My friend Mr Rajinikanth and I are of the same opinion that if need be all hands should join for the sake of Tamil Nadu and we are no exception," he told reporters in Chennai.

"That is our attitude, we mean it.. we have come here not just to do politics but to make a better Tamil Nadu," the actor-politician added.

He, however, said their statements on Tuesday should be "carefully" looked into.

"Carefully look at what we had said.. (they had said they would join hands) if required only.. we will, if required, and that too for Tamil Nadu's sake," he said.

Beyond our friendship, Tamil Nadu's welfare was important, he added.

Haasan also ruled out any time frame for the two actors possibly working together politically.

"The positive thing (from the developments) is that there is an assurance we will work for Tamil Nadu," he said.

When a scribe asked if Rajinikanth would join his MNM, Haasan shot back saying it was "not fair" to pose such questions.

Responding to Haasan's statement, Panneerselvam said none can affect the ruling party.

"The AIADMK's base is very strong. We are not worried who joins hands. This movement is cadre-based," he told reporters.

While many political parties could come into existence they can, however, do no damage to the AIADMK, he added.

However, his party and cabinet colleague Jayakumar seemed to be more harsh towards Haasan and Rajinikanth, calling them a mirage and 'illusion.'

"A mirage, illusion is being created. It is like those who went believeing it was water and getting disappointed," he said.

"Rajini or Kamal or Vijay (another top actor who is rumoured to be harboring political ambitions) are all illusions.. they cannot survive in Tamil Nadu politics," the minister said.

To another question, he described top actor Ajith Kumar as "dignified and dedicated to his profession".

Ajith Kumar is considered Vijay's rival, and known to keep away from controversies, although he had once publicly told then chief minister and late M Karunanidhi, that actors were forced to attend certain events which became a debating point.

Exuding confidence that the possible Rajini-Kamal duo cannot do harm to the AIADMK-led alliance in the state electorally, Jayakumar said "none will stand before" the coalition, comprising of the Bharatiya Janata Party, Desiya Murpokku Dravida Kazhagam and the Pattali Makkal Katchi.

On Tuesday, the Kamal Haasan and Rajinikanth set off speculations of a political realignment after each of them indicated their willingness to work together for the state's welfare.

The first pitch was made by Haasan who backed Rajini over his comments describing chief minister K Palaniswami coming to the top post as a "wonder", saying it was "not a criticism but the reality."

"If a situation arises wherein me and Kamal have to join hands for the welfare of people of Tamil Nadu, we will surely come together," he said.

Rajinikanth had announced in December 2017 that he would launch his political party to contest the state assembly elections due in 2021, while Haasan is already leading MNM, founded last year. 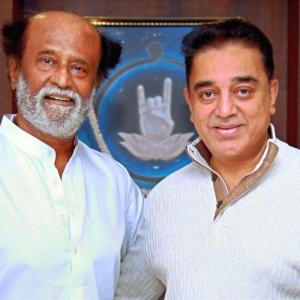