The crisis in Rajasthan Congress after the debacle in the Lok Sabha polls deepened on Tuesday with two more leaders voicing their disappointment despite an advisory from the party against making public statements.

Jaipur former mayor Jyoti Khandelwal, who was also the Congress candidate in the Lok Sabha polls, blamed poor booth management for her own defeat and sought a detailed analysis.

Meanwhile, the Rajasthan PCC will meet on Wednesday at party headquarters, a party spokesperson said.

The meeting will be presided by Pilot in which All India Congress Committee general secretary Avinash Pandey and Gehlot will also be present, he said.

It will be the first executive committee meeting after the party's debacle in Lok Sabha polls.

Party leaders said that the meeting will brainstorm on the reasons of party's poor performance.

The Congress failed to win a single Lok Sabha seat in Rajasthan despite a winning the assembly elections there just months back.

'Wherever you go in Rajasthan, you hear one voice -- Congress. The results of the Lok Sabha elections would have been different had the party made Sachin Pilot chief minister as a reward for his hard work over five years,' he wrote.

'The public says it was because of Pilot's hard work over five years that a favourable atmosphere for the party was created and the party's MLA candidates won,' he said, adding that the youth thought that the younger leader will get the chance to be CM.

When contacted, Asopa said, "I have just expressed my opinion on social media."

He added that this was also the general sentiment.

"Pilot worked hard for five years. He has wide acceptability among the youth who saw him as the next chief minister of Rajasthan during the assembly elections last year," he told PTI.

He said the youth were disappointed when he was not made the CM.

Jyoti Khandelwal said she wrote a letter to Rahul Gandhi before the counting of votes, seeking a detailed analysis of the party's functioning in Jaipur constituency, where she lost.

"There was no impact of the Modi wave on the Jaipur seat where Congress vote share has increased as compared to the 2014 elections," she claimed.

"Leaders and workers were not active in Malviya Nagar assembly constituency under the Jaipur Lok Sabha seat and the booth management was poor," she said.

"The party should take the Jaipur Lok Sabha seat first for a detailed assessment," she added.

She demanded that phone call details of leaders in Malviya Nagar should be examined and responsibility for the failure fixed.

Earlier, Rajasthan ministers Udai Lal Anjana and Ramesh Meena had also demanded introspection and a detailed analysis of the defeat.

Agriculture minister Lalchand Kataria on Sunday announced his 'resignation' from the state cabinet.

A purported press release, circulated on social media, said he was resigning over the poor performance by the party in the elections.

But there has been no confirmation on this by the Chief Minister's Office or the Raj Bhawan, and the minister has been unreachable.

Ashok Gehlot faces accusation that he concentrated on his son Vaibhav Gehlot's Jodhpur constituency, neglecting others.

All India Congress Committee general secretary in charge of Rajasthan, Avinash Pande, has advised party workers against airing their views in public.

"Congress leaders and workers should refrain from giving public statements. A review meeting on the election results will be held soon and every Congress man will have a chance to express his thoughts," Pande said in a statement on Monday.

Congress faced defeat on all the 25 Lok Sabha seats in the state. 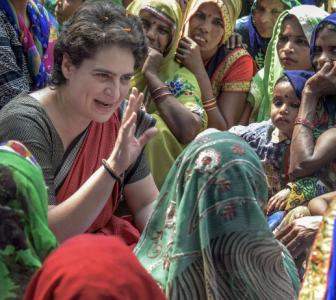