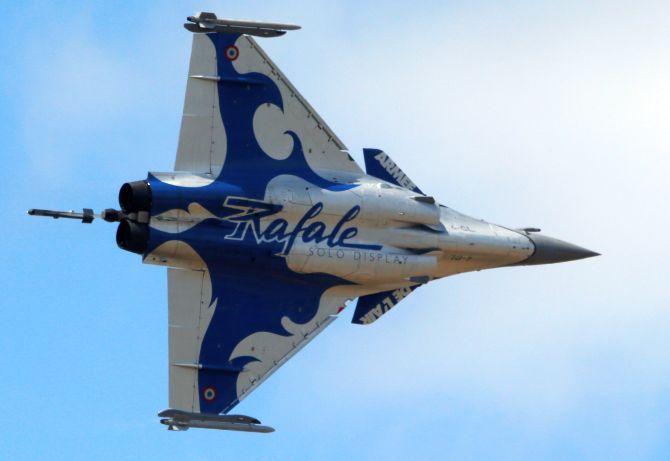 The Supreme Court on Thursday said it will first decide on the preliminary objections raised by the Centre that the documents on which it was claiming 'privilege' cannot be relied upon to re-examine the verdict in the Rafale fighter jet deal with France.

"Only after we decide the preliminary objection raised by the Centre, we will go into other aspect of the review petitions," said a bench headed by Chief Justice Ranjan Gogoi.

The bench, also comprising Justices S K Kaul and K M Joseph said that 'only if we overrule the preliminary objection, we will go into other details'.

At the outset, Attorney General K K Venugopal, claimed privilege over documents pertaining to the Rafale fighter jet deal with France and said those documents cannot be considered in evidence as per Section 123 of the Indian Evidence Act.

He contended that no one can produce them in the court without the permission of the department concerned as those documents are also protected under the Official Secrets Act and there disclosure is exempted under the Right to Information Act as per Section 8(1)(a).

The Centre objected to the admissibility of those documents annexed by former Union ministers Yashwant Sinha and Arun Shourie as also activist lawyer Prashant Bhushan in their review petition against the apex court's December 14 judgement dismissing all petitions against the Rafale jet deal.

The bench said that 'argument on the preliminary issue and the claim of privilege raised by the Government of India is reserved'.

It noted further that according to the AG's submissions 'there are three Rafale documents whose publication comes under Official Secrets Act, 1923. These documents were unauthorisedly published. You claim privilege under section 123 of Evidence Act. You want us to adjudicate and strike down the review on this basis'.

After the submission of Venugopal, the bench asked Bhushan, who was appearing for Sinha, Shourie and himself, that he has the right to reply in writing to the affidavit filed by the Centre on Wednesday.

However, Bhusahn said he did not think that there was a need to reply in writing and submitted a note countering the preliminary objections raised by the centre on maintainability of the review petitions, stating that 'preliminary objection are mala fide and totally untenable arguments'.

He said government cannot claim privilege over the documents which are already published and is in public domain.

While the Centre was making submission that the documents can be withheld from disclosure under the Right to Information Act in view of the national security, the bench said Section 22 of the RTI Act gave it an overriding effect over the Official Secrets Act.

The bench also said that under Section 24 of the RTI Act even security and intelligence establishments are not exempted from disclosing information in relation to corruption and human rights violations.

"The RTI Act brought a revolution. In 2009, your own government said file notings can be made available under the RTI. Let us not go back now," the bench said.

Shourie submitted that he was thankful to the Centre and the Attorney General for saying in their affidavit that these are photocopies, proving the genuineness of these documents.

Bhushan further said that provisions of the RTI Act say public interest outweighs other things and no privilege can be claimed except for documents which pertain to intelligence agencies.

He also said that there is no government-to-government contract in purchasing Rafale jets as there is no sovereign guarantee extended to India by France in the Rs 58,000 crore deal.

He submitted why the government didn't lodge any FIR when these documents started coming out in November 2018.

"How can they question leaks when they themselves leaked a document containing notings by the then Raksha Mantri" Bhushan contended.

He further said that the government has itself filed a detailed Comptroller and Auditor General report regarding as many as 10 defence purchases and it is untenable on their part to now claim privilege.

"Rafale is the only case where they redacted pricing details," he said and countered the preliminary objections raised by the Centre by reminding previous orders of the apex court in the 2G spectrum scam and coal block allocation scam that it is not mandatory to disclose the source in the matter of public interest.

He also cited Pentagon Papers case of USA in which question had arisen as to whether defence documents relating to the Vietnam war could be published saying that the US Supreme Court rejected the claim of national security.

He also said the Press Council of India Act provides provisions for protecting sources of journalists.

Senior advocate Vikas Singh, appearing for another petitioner Vineet Dhanda, said that the government cannot claim privilege on these documents.

Advocate M L Sharma also submitted that if the Centre was claiming that the documents were illegally procured why no action has been taken and no first information report filed.

The hearing commenced with Attorney General telling the bench that there was a mistake when the Centre filed the CAG report in the Rafale deal as some pages were missing in it those have to be brought on record.