'The air force continues to be short of planes.'
'So, more than a decade after the last selection round got under way, the same process is about to start again for the same kind of aircraft, naturally with the same likely bidders,' points out T N Ninan. 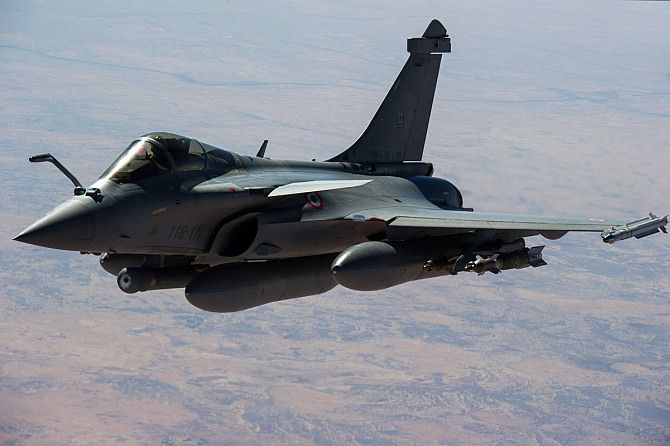 The Congress effort to make the 36-jet Rafale deal the Bharatiya Janata Party's Bofors, and to snare Narendra Damodardas Modi in its exhaust fumes just as Bofors flattened Rajiv Gandhi, may or may not succeed.

Not because pay-offs did or did not exist. Almost all defence deals of this kind involve pay-offs at different levels -- as anyone who is not a babe in the wood knows. But it is hard to get conclusive facts, and there is no evidence available of bribes in the case of Rafale.

The difference between the two cases is that the Bofors scandal erupted following a Swedish radio broadcast and a panic-stricken response by the Rajiv government. The issue became a scandal in Sweden, not just India, and set off prosecutorial activity there.

Without that (combined with good media sleuthing), the precise amount of the pay-offs and the identities of beneficiaries would not have become public. Nothing of the kind is likely to happen in France.

The Rafale brouhaha therefore is only in India, and is focused on establishing that the deal which Mr Modi and his government signed involves a higher price per aircraft than the one that the previous Congress-led government was negotiating.

But a one-to-one comparison for such complex weapon packages is next to impossible to work out and be beyond dispute.

Assuming for the sake of argument that pay-offs exist, they can easily be masked.

So it is hard to understand why the government treats the price details as secret.

Nothing would be lost in making them public, especially since the broad numbers are already available.

The point is that even if the government were to adopt a transparent approach on the cost details, much of the information on the deal would have to be kept secret and that would come in the way of a proper comparative assessment.

Meanwhile, the scandal which does not need any unearthing because it stares the country in the face, is the way defence purchases are being done, or not done.

The Rafale was chosen in 2012, but reports said the actual cost was proving to be twice what had initially been put out.

So price haggling went on for two years, until there was a change of government.

A year after that, and eight years after the request for proposals, Mr Modi did a bilateral deal for two of the original seven squadrons.

Naturally, the air force continues to be short of planes. So, more than a decade after the last selection round got under way, the same process is about to start again for the same kind of aircraft, naturally with the same likely bidders.

If the country is lucky, an order may be placed in five years and the planes start getting delivered a couple of years after that. That would take the time table to 2025 -- and nearly a quarter-century of contracting effort.

This is not an isolated example.

In 1999 the government decided on ordering conventional submarines; half a dozen were to be commissioned by 2012, and another half-dozen after that.

So far, in 2018, the navy has commissioned one submarine, instead of a possible 12.

There are similar stories concerning the army, like taking 30 years to sign the first howitzer deal after Bofors. None of this is a secret.

Indeed, all of it and more has been aired repeatedly in the media by very competent writers, but the defence acquisition system seems paralysed and incapable of change.

Why doesn't Parliament hold the government to account on this issue?