I feel proud to be Hindustani Muslim: Azad in RS farewell speech

Outgoing Leader of Opposition in the Rajya Sabha Ghulam Nabi Azad on Tuesday said he feels proud to be an Indian Muslim. 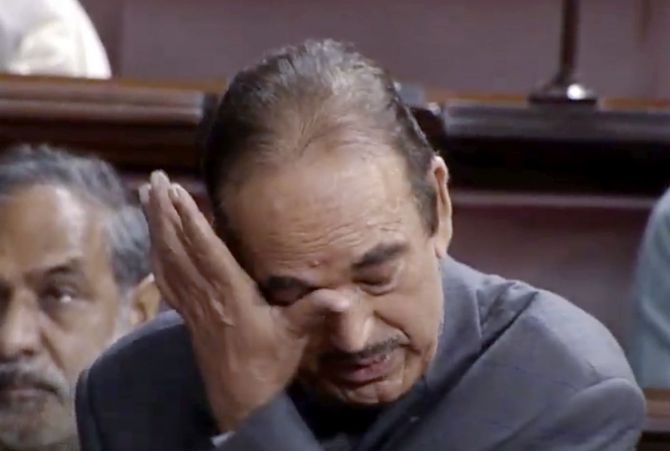 IMAGE: Leader of Opposition Ghulam Nabi Azad got emotional in a farewell speech on his retirement as Rajya Sabha member during the Budget Session of Parliament, in New Delhi on Tuesday. Photograph: ANI Photo/RSTV

Delivering his farewell speech in the Upper House of Parliament, the veteran Congressman recalled his association with several leaders, including stalwarts from other parties, which helped him learn many things.

In his 28-minute speech, he used several couplets and hoped for the restoration of peace in Jammu and Kashmir and the return of Kashmiri Pandits back to the valley.

Recalling his journey, Azad, who started his political career when he was still a student, said reading about Mahatma Gandhi, Jawaharal Nehru and Maulana Abul Kalam Azad made him patriotic.

SEE: 'Proud to be a Hindustani Muslim': Azad in his retirement speech

He said it would take weeks to narrate his legislative experience of 41 years and recalled how his political career started during his school days.

The former Union minister said he is among those "lucky" people who have never gone to Pakistan. "When I read about the state of affairs in Pakistan, I feel proud that I am a Hindustani Musalman," he said.

Muslims in India should have pride for themselves as they have kept away from the evils that are there in the neighbouring countries, Azad said.

However, he also added: "The majority community should also take two steps forward."

Remembering his tenure as the chief minister of the erstwhile state of Jammu and Kashmir, Azad said he had convened his first public meeting in the troubled Sopore district, which is unthinkable even today.

"I had said my government would be a government of the people of Jammu and Kashmir and if any minister worked on the basis of religion and party, I would be ashamed," he said.

"I have worked with five presidents and around four or five prime ministers as a member of their cabinets. I also got the opportunity to work as the party in-charge of states and Union territories 35-36 times," he said, adding that he got to learn several things from these experiences.

Azad also remembered how he got chances to work with senior Congress leaders and even with stalwarts of other political parties while negotiating on behalf of his party, including Jyoti Basu of the Communist Party of India-Marxist, M Karunanidhi of the Dravida Munnetra Kazagham, J Jayalalithaa of the All India Anna Dravida Munnetra Kazhagam, Chandra Shekhar, Mulayam Singh Yadav, Parkash Singh Badal, G K Moopanar, K Karunakaran, Farooq Abdulla and Mufti Mohammad Sayeed.

"I was the parliamentary affairs minister with three prime ministers," he said.

Azad said from 1991-96, when the Congress was in power, he was the parliamentary affairs minister in the minority government and Vajpayee was the leader of opposition, he learnt a lot from the latter.

"I have learnt from him as to how a solution is arrived at in which both the government and the opposition will have their say," he said.

Azad said he has cried only five times in his life -- when Sanjay Gandhi, Indira Gandhi and Rajiv Gandhi died, which were sudden, during the tsunami in 1999 and in 2005, when he was the chief minister of Jammu and Kashmir and terrorists had killed Gujarati tourists in a grenade attack on their bus.

Even when his father died, he had tears in his eyes but did not cry, he said.

"Today, I pray to god to finish militancy from this country," Azad said, while pointing out that thousands of police, military and paramilitary personnel have been killed in the battle against terror.

"Several citizens have also been killed in cross-firing and thousands of our daughters and mothers have become widows," he said while hoping that normalcy returns to the Kashmir valley.

Azad also recalled his association with Kashmiri Pandits, who used to vote for him in large numbers during his student union days.

"Now, all of us are separated and I always have deep regrets when I meet my classmates," he said.

Dedicating a couplet to all those displaced from the valley, the former Jammu and Kashmir chief minister said, "Us ashiyana jo ki is waqt ujda hua hai, uske liye hum sabko prayas karna hai (all of us have to make efforts to restore the nest, which is devastated now)."

He also praised the prime minister, who always wished him personally on occasions such as Eid and his birthday.

Azad's Rajya Sabha membership comes to an end on February 15. 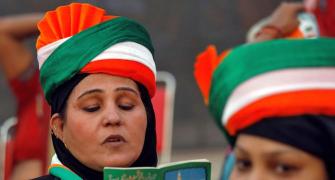