Process to elect next party president set in motion: Cong

The Congress on Saturday said that Sonia Gandhi has made organisational changes after authorisation from the party's working committee and has set in motion the process of election of the next party president by constituting an election authority. 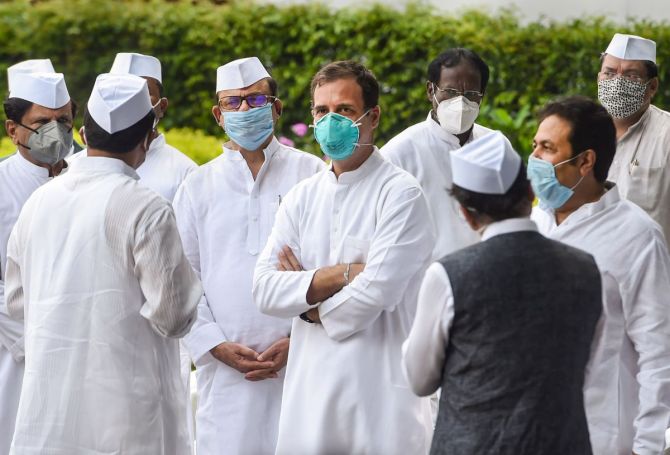 Asked about the organisational changes made by Gandhi and the subsequent reported statements by some leaders who had written to her over party reforms, Congress' chief spokesperson Randeep Surjewala said he had not seen a single statement by any Congress leader on the issue and cannot comment on that.

On whether the organisational changes had Rahul Gandhi's imprint, he said Rahul Gandhi was unanimously elected in an All India Congress Committee session, but post the 2019 verdict he chose to take moral responsibility and resigned.

"Crores and crores of Congress workers and unanimously all leaders including the ones that you mentioned in the meeting of the CWC expressed complete confidence in the leadership of Sonia Gandhi and Rahul Gandhi and in fact some of them urged him to take over as Congress president," he said at an online press conference.

However, he said, it was not for him to comment on the issue at this juncture 'for Congress president Sonia Gandhi has constituted an election authority and has set the process of election of the President in motion'.

On being pressed further on the issue, Surjewala recalled Sonia Gandhi's remarks where she had said that 'our job is to fight the Modi government and its anti-people policies and not fight with each other' and all of us are working towards that single minded goal, like Arjuna used to only look at the eye of the fish'.

Gandhi also formed a six-member special committee to assist her in organisational matters, apart from reconstituting the central election authority of the AICC with Madhusudan Mistry as its chairman, Rajesh Misra, Krishna Byre Gowda, S Jothimani and Arvinder Singh Lovely as its members.

Gandhi, 73, left for the United States on Saturday for a routine medical check-up, sources close to her said.

She would return in the last week of September and would miss more than half of the Monsoon Session of Parliament.

She is accompanied by Rahul Gandhi, who is expected to return within a week, they said.

Her medical check-up was overdue and was delayed due to the COVID-19 pandemic, the sources said.

She had cleared the Congress' organisational restructuring before departing for her medical check-up.