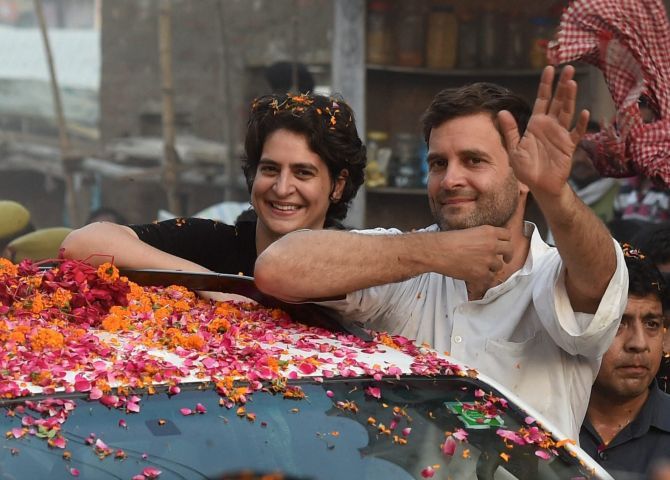 IMAGE: Priyanka Gandhi has campaigned and managed the affairs of the party in the family strongholds of Amethi and Rae Bareli. Photograph: PTI Photo

The young woman who first broke into the nation's consciousness as she walked with crowds along her father Rajiv Gandhi's cortege 28 years ago on Wednesday took her maiden step on the road to formal politics when she was appointed Congress general secretary.

The 'will she, won't she' discussion on when and if Priyanka Gandhi would decide to move from being star campaigner and confidant for her mother Sonia Gandhi and brother Rahul Gandhi and take on a wider role for a party, seen to be moribund for a while, has finally ended.

Elder brother and Congress president Rahul Gandhi appointed her All India Congress Committee general secretary of Uttar Pradesh East, in what many said would infuse energy into the party ahead of the general elections.

The 47-year-old mother of two was seen as her grandmother Indira Gandhi's true inheritor, resembling her not just in looks but also in her ability to reach out to people with her easy manner.

Priyanka Gandhi's strength so far has been in bringing together party workers and she is at her best during interactions with voters and workers in her family bastions Amethi and Rae Bareli, say party workers who have been clamouring for her to come into the forefront of active politics.

Those who have worked with her say she adds a personal touch in her interactions with people and believes in directly dealing with them.

She started her foray into politics with the 1999 Lok Sabha election of Sonia Gandhi from Amethi, her first after she assumed as party president. Priyanka Gandhi has campaigned and managed the affairs of the party in the family strongholds of Amethi and Rae Bareli ever since.

That was also when Priyanka Gandhi showed the core of steel, for which her grandmother was famous.

The Bharatiya Janata Party had fielded her uncle and former Rajiv Gandhi confidant Arun Nehru from Rae Bareli and Priyanka Gandhi minced no words when she addressed the crowds.

"I have a complaint against you...A man who committed treachery and who stabbed his brother in the back, how can you let such a man here? How did he dare come here?" she told voters then, making a fiery political point with effect.

She also managed the campaign for her brother in 2004 in Amethi, his first election.

With her formal advent into politics, Priyanka Gandhi will now hold fort for the Congress from eastern Uttar Pradesh, covering almost 40 of the total Lok Sabha seats in a region which has sent Prime Minister Narendra Modi (Varanasi) and Uttar Pradesh Chief Minister Yogi Adityanath (Gorakhpur) to the Lok Sabha.

"She has been managing the campaign of her mother and brother for 20 years now and has the experience of handling their last five elections," said a senior party leader who has worked closely with her.

As some people welcome the move as a game changer, the Congress is hoping to use her persona to consolidate its hold in Uttar Pradesh, where the party now wants to put out its best after the Samajwadi Party and the Bahujan Samaj Party have announced a tie-up.

Her appointment as general secretary for Uttar Pradesh East has brought cheer to party workers who have been chanting slogans like 'Priyanka lao, Congress bachao' (bring Priyanka and save the Congress) for many years now.

Born on January 12, 1972, Priyanka Gandhi married to Robert Vadra, a businessman from Delhi, on February 18, 1997 in a traditional Hindu ceremony. They have two children -- son Raihan and daughter Miraya.

Priyanka Gandhi is learnt to have converted to Buddhism and follows Buddhist philosophy and is a practitioner of Vipassana.

The couple is also seen in their children's schools, taking part in Sports Day events and parent-teacher meetings just like any other parent.

Priyanka Gandhi did her schooling from Modern School and Convent of Jesus and Mary in Delhi and later pursued her graduation in Psychology from Jesus and Mary College. She also did her masters in Buddhist Studies.

Party insiders feel her resemblance to her grandmother might also help the Congress' prospects.

The party also feels that her entry will give the necessary boost to the Congress party ahead of Lok Sabha elections.

It is to be seen, however, whether she contests the Lok Sabha polls or remains the star campaigner for the party. 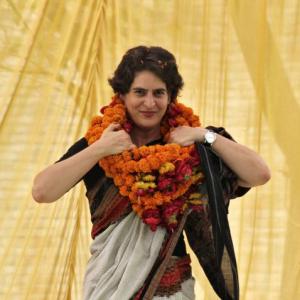