An encounter with Priyanka Gandhi!

In 1998, the Congress asked her mother to campaign.
'We had a family discussion. We explained to our mother that you will be used, you will be discarded once you are done with the campaign.'
'A few days later I got a call from my mother. She said, "I have decided to campaign".'
'We were stunned. Why was she doing this?'
Payal Mohanka listens in. 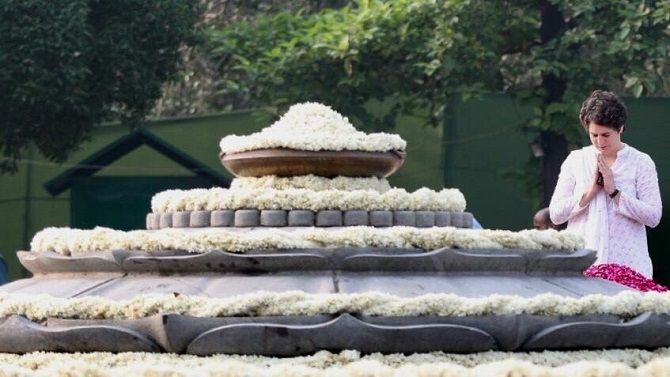 In the aftermath of the assembly results, the capital is abuzz with the Will-Modi-Return? chatter. During my brief stay I found that at one level disenchantment had truly set in and the man on the street was ready to bid adieu to the present dispensation. The Modi government had failed on several counts.

A Calcuttan, I thoroughly enjoyed this conversation with anyone who crossed my path in Delhi. So as I get into my Uber on a cold December morning, I find the guy at the wheel is a complete political animal and a staunch Modi supporter.

"Can the Opposition put up a united front? Will the Congress get the numbers? What will the Mulayam Singh Yadavs and Mamata Banerjees do? I will vote for Modiji."

"What about the institutions that are being destroyed?" I ask.

"What is he doing to the RBI?"

"Modiji is good. It is his team that is to blame," he insists.

I am not a Modi fan so after a point I just listen. He continues his animated soliloquy.

Suddenly, he surprises me.

"Madam, do you know there is one person in this country who can actually give Modiji a fight." 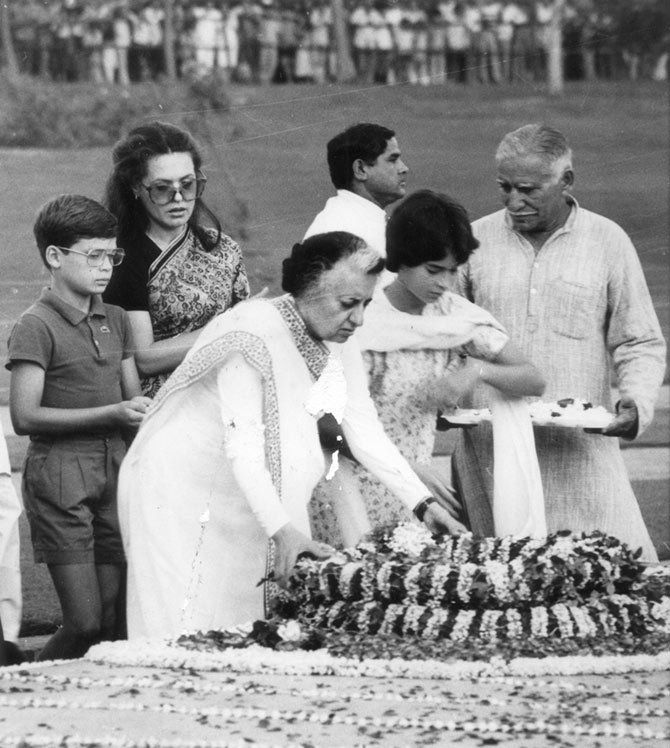 "She is a mirror image of Indira Gandhi. mAnd do you know she has the same voice too."

This one is an unusual Modi fan. "If she appears on the scene, she definitely has my vote."

I am speechless. This diehard Modi supporter's blatant adoration surprises me. Though just a few days ago, I too was part of an enthralled audience at a private event in Kolkata.

While we drive to my destination I relive the fascinating insight into the mind of the elusive Priyanka Gandhi Vadra.

Political dynasty was not about entitlement and legacy. "I think the idea of dynasty arises because generations of us have been in politics but it was not instilled in us," Priyanka explains.

To the outside world political dynasty reeked of privileges but to a young child who had seen her grandmother Indira Gandhi's political and private life merge into one, it was not a legacy of privileges, but a supreme sense of duty and service. A legacy of greater responsibility.

She had seen her grandmother's physical courage, her inherent strength, her femininity and her gentleness as a grandmother. She had a great sense of humour too.

"It is strange my mother, Sonia Gandhi, being Italian, is more submissive and quiet compared to my grandma who was a very strong lady. She was a very powerful example in front of us."

"It was not a quality, just the fact we looked similar. She was bossing people. I wanted to boss over kids," she adds with humour. 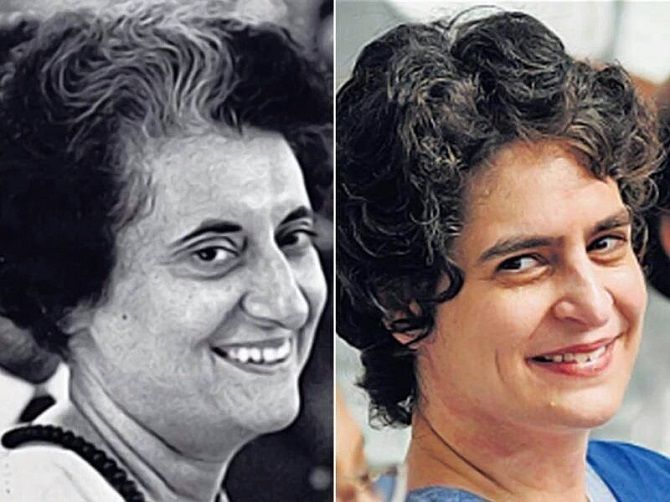 Memories of that fateful morning when her grandmother was assassinated are etched forever. She had borrowed a jhola from her grandmother for a drama competition and left for school. Her mother was alone at home, while her father was in West Bengal.

It was six days after Diwali and the sound of gunshots had stunned her mother who stepped outside and found the then prime minister lying on the path between the house and the office. She breathed her last before she could reach the hospital.

"We could not fathom that she was killed. She was larger than life. It was while watching television that we realised my father had been made prime minister. I remember saying they've made a mistake. See what they have written below papa's name."

Life changed drastically. They now lived under the shadow of threat.

She and her brother were home schooled. For a young girl it was an excruciatingly boring schedule. They barely went out.

Once a week they were permitted to visit a friend's home.

When she entered college, she was initially terrified as seniors "were waiting to catch Rajiv Gandhi's daughter".

"While I was comfortable at a table with heads of State, I had never interacted with people my age," she points out.

At heart she was a simple girl who just wanted to have a normal existence. She handled it with aplomb and grace and after a couple of months, college turned into the nicest experience of her life.

She had seen her father Rajiv Gandhi live a private life as a pilot with his shy Italian wife. As a youngster, she had watched her parents's internal struggle to enter a world so different from their own.

A series of events pushed him into the world of politics.

"He was not perpetuating a dynasty. It was a sense of duty, a greater mission, a calling. That's how I understood politics. It was a different patriotism from the one we see today," she explains.

1991 brought greater trauma for the Gandhi family. Her father's assassination brought her world crumbling down.

"He was my best friend, the stabilising force in my life. He was strong, gentle, kind and I could rely on him 100%. Each time he left home I felt he was not coming back. We had psychologically lived with his loss," Priyanka reveals.

When it finally happened, the family was devastated.

Engulfed in pain, she viewed the whole world through that angst.

Her anchor had gone. She saw the family as victims of a ghastly event.

She spent many years doing Vipassana and meditation.

In 1998, the Congress asked her mother to campaign. "We had a family discussion. We explained to our mother that you will be used, you will be discarded once you are done with the campaign. A few days later I got a call from my mother. She said, 'I have decided to campaign'."

"We were stunned. Why was she doing this? She said she couldn't face our father's photograph."

Her mother dropped her low-key profile and took on the task of memorising her speech for the Ramlila Ground, "There were a lakh-and-a-half people. Her hands were shaking. 'I can't, I can't,' she kept saying. We told her it was too late, she had made this choice."

"Gradually, we saw her transformation. It was her courage, her sense of duty. She went beyond the interests of the self towards a greater calling."

It was in 2008 that Priyanka found the courage to acquaint herself with one of her father's assassins at the Vellore Central Jail.

Nalini Sriharan, who was married to Murugan who made the bomb, was also sentenced to death. She found herself forgiving those who had brutally brought his life to an abrupt end. They had a cause they believed in, they committed this horrific act for this cause.

Reminiscing about her meeting with Nalini, Priyanka points out, "I went to forgive her. The minute she started speaking, I realised I was so wrong. She had been a victim too. I was 19, she was 23. She was one of 9 children with an alcoholic father and a mother who struggled to send them to school."

"She had fallen in love with a maths teacher and was pregnant with his child. I thought I was the victim, but when I met her, I realised how her life had been destroyed. I saw another human being suffering."

"I was better, I thought. I was going to forgive her. I was the victim. But that single experience altered my way of looking at things. We are all victims."

"We just have to move from judgement to empathy. Victimhood has now become a political tool. Every time we suffer we think it is because of others, which is just not true." A fundamental lesson Priyanka learnt early was the fact that power did not come from within. Power is given to you by the people you work for. Tomorrow if the people don't want you, you will have no relevance.

She said she had a problem with the way politicians talk down to people.

"The way we were brought up, if our parents saw us being delusional even for a second it would have been difficult for us."

"People tell me, 'Your children are very humble'. I tell them what is there not to be humble about. And how could I be consumed by a delusion of power? I had seen so much trauma, loss and violence associated with power. These were my set of problems. Others have worse."

Like any other mother she has enjoyed the role and faced the same issues.

Children will constantly challenge you. You may want them to be a particular way, but they will be their own person.

Her 18-year-old son Rehan and her 16-year-old daughter Miraya now teach her. "Our children are our best teachers. They are sharp. I keep quiet, they lecture me. They straighten you."

"The other day I was going to Lodi Gardens for a walk. I was putting on lipstick. My daughter asked me why I was doing that. I told her someone might ask for a selfie with me. 'Why? Why would someone take a selfie with you?'" she recalls.

"Children are creatures of their own. They should never have a legacy other than the legacy of being a good human being."

"I have faith in the people. They will vote out of a sense of survival. Our democracy has to be kept alive. Democracy means bringing people together, hearing every voice. As a people we love to complain. You cannot take away our right."

When asked about the Emergency her grandmother had imposed, she replies, "I was a child at that time. But then it was grandma who called elections and lost, so she realised it was a wrong decision."

For a firm believer in democracy, was she not being autocratic by not giving into her party's request for her to step into public life?

With an endearing smile she says, "I am 46 years old, I still have time. For now I have made a conscious call to not get too involved with politics, but just be there for my brother and mother." 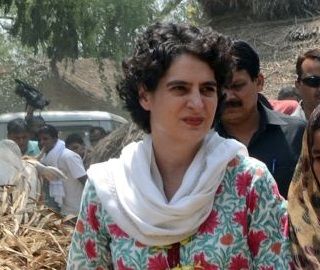 Why Modi needs to worry