The Union cabinet on Monday decided to cut 30 per cent salary of all MPs for one year, and divert MPLAD (Member of Parliament local Area Development) funds for two years --nearly Rs 7,900 crores--to fund the fight against the COVID-19 pandemic. The cabinet gave its nod to an ordinance amending the Salary, Allowances and Pension of Members of Parliament Act, 1954 reducing allowances and pension by 30 per cent from April 1 2020 for a year, he told reporters, adding this will include the prime minister and the Union ministers.

"Charity begins at home," he said.

While the salary of all parliamentarians, including ministers, is more or less same at around Rs one lakh per month, there is a difference in allowances between ministers and common MPs. However, allowances have not seen any cut.

After Javadekar's briefing, the government spokesperson clarified that only the salary and not the pension and allowances of the MPs will be cut.

A decision of more financial import and likely much political heartburn, is the temporary suspension of the MPLAD  fund scheme during financial years 2020-21 and 2021-22.

Each MP gets Rs 5 crore per annum as MPLAD and for two years it would be nearly Rs 7880 crores while by salary cut the government will save about Rs 29 crores a year.

The money will be put in the Consolidated Fund of India (CFI) and used for 'managing health and adverse impact of outbreak of COVID19' in the country, Javadekar said.

All the revenue received by the government by way of taxes like income tax, central excise, customs and other receipts flowing to the government are credited into the CFI.

All government expenditure is incurred from this fund and no amount can be withdrawn from the CFI without authorisation from Parliament.

While the salary cut, not more than 30,000 per month for each MP, may not be a big amount for most of the lawmakers, the suspension of MPLAD fund for two years will deny MPs their biggest tool to push development projects in their constituency.

Bharatiya Janata Party president J P Nadda welcomed the decision to cut salary, saying national interest has always been supreme for his party. He made no mention of the decision to suspend the MPLAD fund.

BJP MP Subramanian Swamy, known for his frank views which are at times at variance with his party, said he welcomed the cut, and added that the construction of new parliament building should also be postponed for a year, claiming that it will cost Rs 25000 crores.

Congress welcomed the decision to cut MPs' salaries, but said suspending MPLADs, as the development fund scheme is known, will undermine the role of an MP and called for its review. CPI(M) also slammed the suspension of the MLAD scheme, while Trinamool Congress called it 'whimsical'.

The measure may upset some of the BJP MPs as well but there is a view within the party that the cabinet decision will strengthen the Modi government's image of being decisive and not afraid to take hard decisions for the larger good.

Earlier in the day, Modi asked countrymen to be ready for a long battle against the outbreak, but also indicated some easing of restrictions in phased manner after the nationwide lockdown ends on April 14.

At the forefront of his government's as well as the ruling BJP's efforts, including public outreach, Modi addressed party workers where he asked the countrymen to feel neither tired nor defeated in this long fight and then presided over the meetings of the Union Cabinet and Council of Ministers.

Indicating a phased opening of the ongoing lockdown, Modi also asked Union ministers to prepare a 'graded plan' to slowly open departments in areas that have not emerged as hotspots of the COVID-19 pandemic.

Modi made this suggestion while chairing a meeting of the council of ministers through video conferencing.

Talking about the impact of COVID-19 on the economy, the prime minister said that the government must work on war footing to mitigate the impact, adding that the ministries should prepare a business continuity plan, according to an official statement.

'He noted that a graded plan to slowly open departments where hotspots aren't existing should be made,' the statement said. 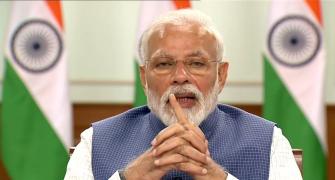 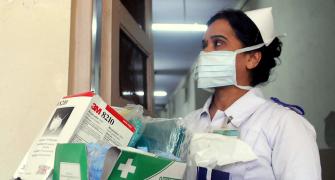 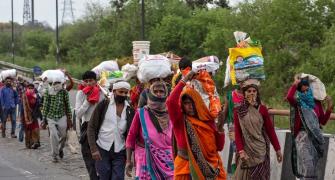