Postpaid mobile services to resume in Kashmir from Monday

In a major step towards easing the 69-day lockdown in the Kashmir Valley, authorities on Saturday announced that some 40 lakh postpaid mobile phones will become operational from Monday noon. 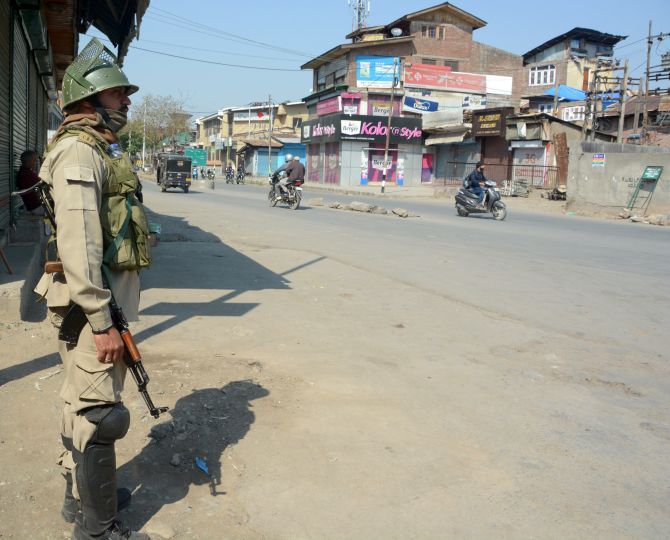 The announcement was made by Jammu and Kashmir Principle Secretary and Spokesman Rohit Kansal at a nationally televised press conference here.

However, over 20 lakh prepaid mobile phones, and mobile and other internet services will remain deactivated for now.

Restrictions were imposed after the Centre on August 5 abrogated the state's special status and bifurcated it into Union territories of Jammu and Kashmir, and Ladakh, which will come into being on October 31.

"More specifically, all postpaid mobile phones, irrespective of the telecom service provider, will stand restored and be functional from 12 noon on Monday, 14 October, 2019," he said while reading out from a statement at the conference.

Kansal said the decision is for all 10 districts of the Kashmir province.

The announcement tops a number of steps taken in the recent weeks to remove restrictions that were imposed after Jammu and Kashmir was stripped of its special status.

The state was opened to tourists two days ago. Educational institutions are also open, but attendance has been slim.

Lack of mobile phone connectivity has caused immense hardship to the people and the announcement of its restoration is the most significant step towards ending the communication blockade.

"Tourists are welcome to visit the state and they will be facilitated for their visit. Internet facilities are being opened at tourist places to assist tourists," he said.

Kansal was also asked when political leaders, including former chief ministers Farooq Abdullah, Mehbooba Mufti and Omar Abdullah, and activists would be released.

"I have been emphasising, reiterating and sharing that the developments post August 5 and the security assessment that was made required a certain kind of action which included detaining the leaders," he said.

"These decisions were taken at the local level by law enforcing authorities after taking all factors into consideration. Detentions are being continuously reviewed and if there are persons who have been detained, there have been people who were released.

Mobile phone services were slated to resume on Saturday but a last minute technical hitch led to it being deferred.

Partial fixed line telephony was resumed in the Valley on August 17 and by September 4, nearly 50,000 landlines were declared operational.

In Jammu, the communication was restored within days of the blockade and mobile internet was started around mid-August. However, after its misuse, internet facility on cell phones was snapped on August 18.

Kansal appealed to industrialists, traders, transporters, shopkeepers, hoteliers and contractors not to be frightened by threats of terrorists and separatists, and go about their normal activities.

"The government is firm in its resolve that the attempts of these disruptive elements will be foiled. The government thanks the people of state for being cooperative and helping in maintaining peace and public order," he said.

Since August 16, there was a gradual removal of restrictions that were imposed and by September first week, most curbs were removed, Kansal said.

"Barring 8 to 10 police stations, movement restrictions have been completely removed. Over 99 per cent of the area of the state has no restrictions on movement," he said.

There were "sustained attempts from across the border, both in the past and more so in the last two months, to promote militancy and terrorism in the state in order to create a sense of fear and terror among the people and keep the place in a disturbed condition," he said.

There were credible inputs about likely large scale terrorist attacks sponsored by forces inimical to India and from outside its borders, Kansal said.

"These terrorist attacks are meant not only to cause large scale damage to life and property but also create an atmosphere of fear and terror among the people of the state, the vast majority of whom are peace loving," he said.

Banned outfits such as LeT, JeM, Hizbul Mujahideen continue to make attempts to terrorise the people of the state, he said.

It was in anticipation of this, restrictions were imposed so that externally aided terrorism doesn't lead to loss of lives. It's a tribute, both to the people and to security forces. These measures ensured there is no unnecessary loss of life, Kansal said

He termed as "remarkable" the developments, given the history of events in 2008, 2010 and 2016. Some killings and injuries were inflicted by terrorists, including on a baby, to prevent business, Kansal said.