However, a 'consensus could not be reached' on naming Pak-based terror groups in the declaration. 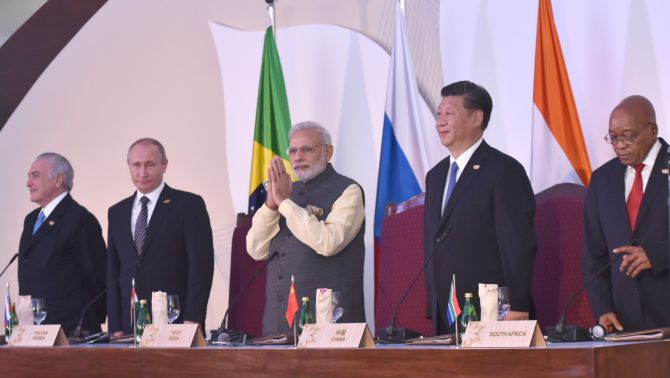 Strongly condemning the recent terror attacks in India and other nations, Brazil, Russia, India, China and South Africa on Sunday asked all countries to prevent ‘terrorist actions’ from their soil and called for expeditious adoption of an India-backed global convention by the United Nations to fight the menace effectively.

A declaration adopted at the annual summit of BRICS called upon all nations to adopt a comprehensive approach in combating terrorism, violent extremism, radicalisation, recruitment, movement of terrorists including foreign terrorists and blocking sources of financing terrorism.

It asked all nations to work together to expedite the adoption of the Comprehensive Convention on International Terrorism in the UN General Assembly without any further delay.

‘We strongly condemn the recent several attacks, against some BRICS countries, including that in India. We strongly condemn terrorism in all its forms and manifestations and stressed that there can be no justification whatsoever for any acts of terrorism, whether based upon ideological, religious, political, racial, ethnic or any other reasons.

‘We agreed to strengthen cooperation in combating international terrorism both at the bilateral level and at international fora,’ the Goa declaration issued at the end of the Summit said.

It also asked the countries to adopt a ‘holistic’ approach in successfully combating terrorism.

The BRICS said sources of terror funding like organised crime by means of money laundering, drug trafficking, criminal activities, dismantling terrorist bases, and countering misuse of the internet including through social media by terror entities should be focus areas.

Stressing UN's central role in coordinating multilateral approaches against terrorism, the BRICS urged all nations to undertake effective implementation of relevant UN Security Council Resolutions and reaffirmed its commitment on increasing the effectiveness of the UN counter terrorism framework.

In the declaration, the BRICS said it reaffirmed commitment to the Financial Action Task Force international standards on combating money laundering and the Financing of Terrorism and Proliferation.

The FATF is an intergovernmental organization founded in 1989 on the initiative of the G7 to develop policies to combat money laundering. In 2001 the purpose expanded to act on terrorism financing.

The BRICS said, ‘We seek to intensify our cooperation in FATF and FATF-style regional bodies.’

In the declaration, the bloc also called for strengthening of international and regional cooperation and coordination to counter the global threat caused by the illicit production and trafficking of drugs, especially opiates.

‘We note with deep concern the increasing links between drug trafficking and terrorism, money laundering and organised crime,’ it said, adding there was agreement on strengthening efforts to enhance security in the use of information and communication technology.

The declaration said the bloc agreed that emerging challenges to global peace and security and to sustainable development require further enhancing of its collective efforts.

‘We note the global character of current security challenges and threats confronting the international community.

‘We reiterate our view that international efforts to address these challenges, the establishment of sustainable peace as well as the transition to a more just, equitable and democratic multi-polar international order requires a comprehensive, concerted and determined approach, based on spirit of solidarity, mutual trust and benefit, equity and cooperation,’ it said. 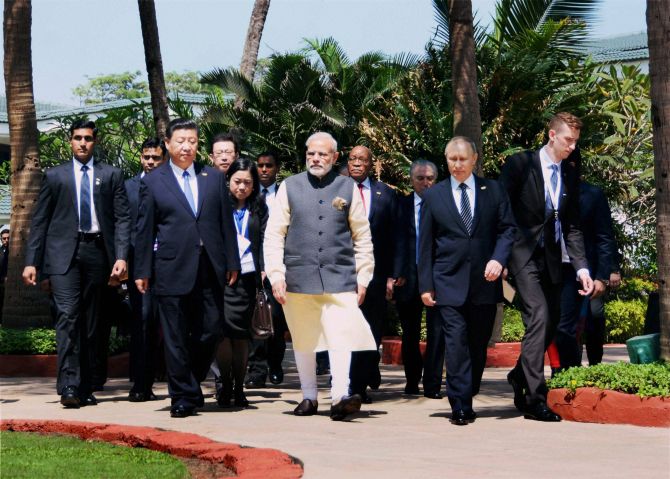 It said, ‘We express our concern that political and security instability continues to loom in a number of countries that is exacerbated by terrorism and extremism. We call upon the international community through the United Nations, African Union and regional and international partners to continue their support in addressing these challenges, including post-conflict reconstruction and development efforts.’

In reference to tax system, it reaffirmed commitment towards a globally fair and modern tax system and welcomed the progress made on effective and widespread implementation of the internationally agreed standards.

‘We support the strengthening of international cooperation against corruption, including through the BRICS Anti-Corruption Working Group, as well as on matters related to asset recovery and persons sought for corruption.

‘We acknowledge that corruption including illicit money and financial flows, and ill gotten wealth stashed in foreign jurisdictions is a global challenge which may impact negatively on economic growth and sustainable development.

‘We will strive to coordinate our approach in this regard and encourage a stronger global commitment to prevent and combat corruption on the basis of the United Nations Convention against Corruption and other relevant international legal instruments,’ it said.

Addressing a press conference, Prime Minister Narendra Modi said the agreement between the BRICS countries under the Goa Declaration were unanimous in recognising the threat of terrorism, extremism and radicalisation.

In his concluding remarks at the BRICS summit, Modi said it was agreed at the summit that those who nurture, shelter, support and sponsor forces of violence and terror are as much a ‘threat to us’ as terrorists themselves and efforts must be speeded up to deal with the menace.

This is seen as a boost to India's stand on the issue as it has been pitching for isolation of Pakistan for its ‘terror export’.

Modi said the leaders were unanimous in recognising the threat that terror, extremism and radicalisation present to regional and global peace, stability and economic prosperity.

“We underscored the need for close coordination on tracking sources of terrorist financing and target the hardware of terrorism, including weapons’ supplies, ammunition, equipment and training,” he said.

“We underscored the need for close coordination on tracking sources of terrorist financing,” he said.

On key agenda of the grouping, Modi said putting the global economy back on track was another focus point of the deliberations, adding the discussions at the summit were ‘detailed, substantive and productive’.

The prime minister said there were deliberations on possibility of setting up an independent BRICS Rating Agency based on market-oriented principles, in order to further strengthen the global governance architecture.

Modi said the Goa declaration lays a comprehensive vision for cooperation within BRICS and international issues.

The prime minister said there was also a clear need to build norms, create structures and pool capacities to stop tax evasion, and fight against black money and corruption.

Asked why the declaration, which names Islamic State, does not mention Pakistan-based terror groups, especially Jaish-e-Mohammed which the United Nations has proscribed, Amar Sinha, Secretary (Economic relations), said a consensus could not be evolved.

He also pointed out India is the victim of the actions of Pakistani terror groups, and not other BRICS nations.

“I guess it does not concern them mainly, BRICS. It affects us. Because Pakistan-based outfits are also focused on India in terms of activities. So since...(it does not affect them), I guess we could not get an consensus on actually including both.

“But if you see, it says ISIS and various other affiliated organisations. and I think there is a reference of terrorists organisations which are designated by the UN,” he said.\

He said the fact remains that Pakistani terror groups have not yet reached South Africa and Brazil. “They may one day, we don’t know,” he said.

In reply to a series of questions on the issue of terror at a press briefing later, he said the multilateral summit should not be reduced to just the issue terrorism.

He defended the non-inclusion of the word ‘cross-border terrorism’ in the Goa declaration saying that focus should be on idea.

He said it was important that India was able to bring everyone onboard with its ideas.

Sinha explained that the declaration accepts that there cannot be a political justification of terror and asks countries to take comprehensive steps against terror.

“I think the message is very clear and you don’t have to spell out everything. You have to see what is the underlying thrust,” he said.

Asked about Chinese President Xi Jingping’s speech in which he talked about the need to focus on the root causes, Sinha said he does not know what he meant by ‘root causes’.

He said China has always said one needs to sit down and that he does not don't think they were referring to root causes of terrorism.

If that were the case, they would not support the CCIT, he said.

The senior diplomat underlined that India was ‘satisfied’ with the Goa declaration.

“Each country in such negotiations that we have done starts from the national position and then it all gets negotiated over long session until you reach a conclusion that is acceptable to everyone.

“We are obviously not looking...that our national position needs to be sort of signed on dotted lines by other countries,” he said.

He pointed out that the declaration mentions terrorism as unprecedented global threat to peace and security. “These are strong words. I don't think they are underplaying,” he said.

“We are quite happy with it,” he said, adding this is not the last summit and the one of the National Security Advisors is coming up.