News
Business
Movies
Sports
Cricket
Get Ahead
Money Tips
Shopping
Sign in  |  Create a Rediffmail account
Rediff.com  » News » PM announces repeal of 3 farm laws, but protests yet to be over

PM announces repeal of 3 farm laws, but protests yet to be over

Prime Minister Narendra Modi on Friday announced a rollback of the three agri laws at the heart of yearlong protests by farmers, a surprise U-turn that was widely welcomed but did not translate to an immediate end to the agitation with farmer leaders pressing for a minimum support price (MSP) guarantee and a formal notification. 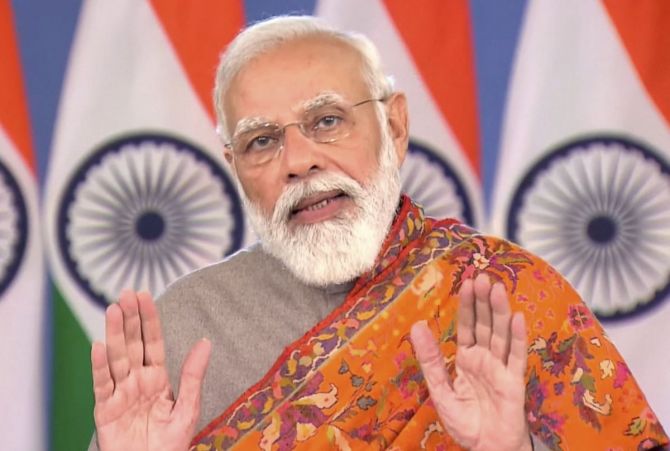 IMAGE: Prime Minister Narendra Modi during his address to the nation, in New Delhi, on Friday, November 19, 2021. Photograph: TV grab via PTI Photo

Addressing the nation on the morning of Guru Nanak Jayanti, Modi called for new beginnings and appealed to farmers who had set up camp at entry points into the national capital since November 28 last year to return home.

The prime minister maintained the laws were for their benefit and also apologised to people of the country, adding that the government could not convince a section of farmers despite its clear heart and clean conscience.

"There may have been some shortcoming in our efforts due to which we could not explain the truth, as clear as the light of the diya, to some of our farmer brothers," Modi said, referring to the protests, spearheaded by farmers from Punjab and also Haryana and western Uttar Pradesh. which left about 700 dead.

With farmers a major political force across lines of region and religion, the withdrawal of the contentious laws was welcomed by most parties.

The ruling Bharatiya Janata Party hopes the decision will placate the two main communities fronting the protests -- the Sikhs, who are in a majority in Punjab, and the Jats, a major demographic constituency in western Uttar Pradesh.

Leaders are hoping it will cancel out political headwinds the party has encountered in the two poll-bound states -- besides Haryana.

Opposition parties, on their part, congratulated the farmers for their hard won victory but questioned the government's 'politically expedient' timing.

The farmers welcomed the announcement of the repeal of the laws, which had pitted farmers and the government against each other through 12 months of dogged protests and 11 rounds of talks, but made it clear it may not be enough.

A final decision on the matter will be taken on Saturday during a meeting of the Samyukta Kisan Morcha's core committee, farmer leader Darshan Pal told PTI.

The umbrella body of 40 farm unions said their agitation was not just against the repeal of the 'three black laws' but also also for a statutory guarantee to remunerative prices for all agricultural produce.

'This important demand of farmers is still pending,' it said, clarifying that it would wait for the announcement to take effect through due parliamentary procedures.

As drumbeats were heard in several places and sweets distributed at the unexpected 'victory', Bharatiya Kisan Union (BKU) leader Rakesh Tikait added that the government should talk to farmers over the issue of MSP of crops and other matters.

'The protest will not be withdrawn immediately, we will wait for the day when the farm laws are repealed in Parliament,' Tikait tweeted in Hindi.

In his speech, the prime minister said the constitutional formalities to revoke the laws will be done during the winter session of Parliament beginning November 29, just a day before the one-year anniversary of the protest that could well continue.

Modi noted that it is the birth anniversary of Guru Nanak Dev and no occasion to blame anyone.

He requested all his farmer friends to return home to their fields and families and make a new beginning on this auspicious occasion, a day when gurudwaras across the country are lit up to celebrate the festival.

"... let us move forward afresh," Modi said, adding that the goal of the three farm laws was to empower farmers, especially small farmers.

The three farm bills at the centre of emotive protests -- and debate -- are the Farmers' Produce Trade and Commerce (Promotion and Facilitation) Act, 2020, Farmers' (Empowerment and Protection) Agreement on Price Assurance and Farm Services Act, 2020 and the Essential Commodities (Amendment) Act, 2020.

The Supreme Court had put the laws in abeyance.

The government will have to move a bill in Parliament to repeal the three agri laws, Constitution and legal experts have said.

According to Supreme Court-appointed farm panel member Anil Ghanwat, the move to repeal the laws is a regressive step.

'Our panel had submitted several corrections and solutions over the three farm laws, but instead of using it to solve the impasse, Modi and BJP chose to backtrack. They just want to win elections and nothing else,' the president of the Shetkari Sanghatna told PTI.

A host of political leaders and others, including showbiz celebs, spoke on the matter.

Home Minister Amit Shah said what is unique about Modi's announcement is that he picked the special day of 'Guru Purab' to make this.

'It also shows there is no other thought except the welfare of each and every Indian for him. He has shown remarkable statesmanship,' he said.

The Congress announced a 'Kisan Vijay Diwas' on Saturday and said it will organise victory rallies across the country on behalf of farmers to mark the Centre's announcement.

Its leaders will also visit the families of the over 700 farmers who died during the agitation andl organise candle marches and rallies.

Describing the Centre's decision as a 'victory against injustice', party leader Rahul Gandhi said, 'Country's 'annadatas' (food providers) have made arrogance bow its head through satyagraha.'

West Bengal Chief Minister Mamata Banerjee sent her heartfelt congratulations to every single farmer who had fought relentlessly and was not 'fazed by the cruelty with which @BJP4India treated you'.

'History teaches us that people's wishes shall prevail in a democracy. I congratulate all the farmers & bow down to their determination for having achieved this through Gandhian means,' he said.

In Bahujan Samaj Party supremo Mayawati's view, the sacrifices of the farmers had paid off with the government in the end withdrawing the three controversial laws but it was too late.

In Singhu, Tikri and Ghazipur, the three borders around Delhi, the thousands of farmers who had given shape to the extraordinary agitation celebrated but some also spoke of a trust deficit.

"It is hard to trust the prime minister about his promises unless he implements them. Since these farm laws were passed in Parliament, we need them to be withdrawn in the same House following due procedure. Else, we won't move," said Birjpal Singh Fauji, a member of the Bharatiya Kisan Union, at Ghazipur.

The prime minister's decision to revoke the laws protests marks the second time since coming to power in 2014 that his government has taken a decision of such magnitude in the face of popular protests.

In 2015, it had allowed the land ordinance to lapse as opposition parties mounted a strong protest. 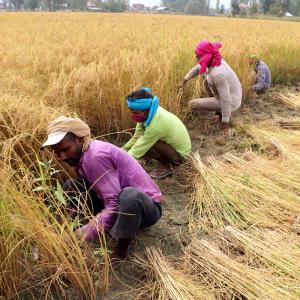