News
Business
Movies
Sports
Cricket
Get Ahead
Money Tips
Shopping
Sign in  |  Create a Rediffmail account
Rediff.com  » News » 'Not my president' chants ring out across America

'Not my president' chants ring out across America 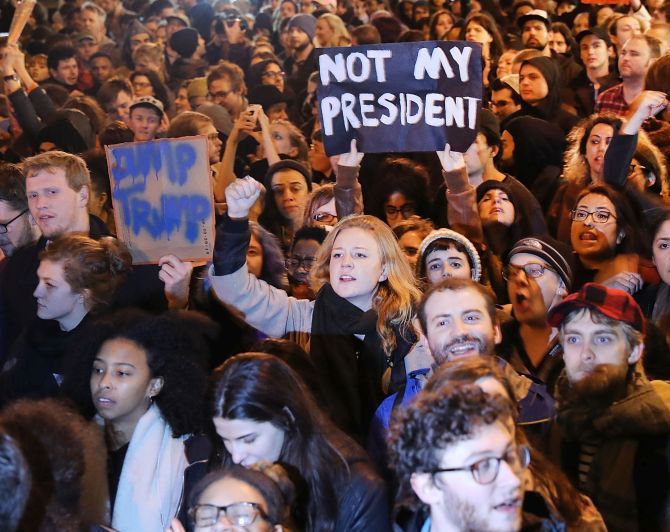 Hundreds of thousands of people took to the streets across the United States to protest against Donald Trump’s victory in the presidential polls, slamming him for his bigotry and racism, as they demonstrated against his electoral pronouncements on immigration and Muslims.

People from all ages, faiths and nationalities assembled at landmark locations in New York, Chicago, Philadelphia, Boston, California, Colorado, Seattle and other cities protesting against Trump, barely a day after he registered a stunning presidential victory against Hillary Clinton.

The protesters held a multitude of placards expressing their resentment for Trump through slogans such as ‘No more Hate’ and ‘Not our President’. 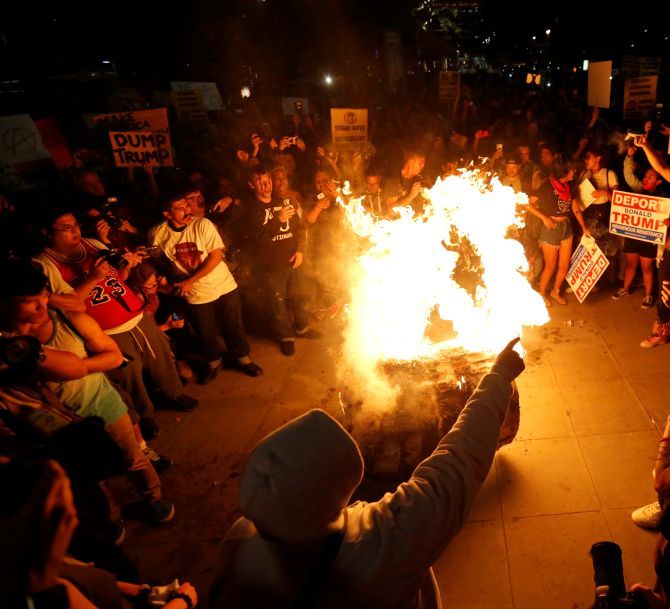 A Donald Trump pinata is burned by people protesting the election of Republican Donald Trump as the president of the United States in downtown Los Angeles, California. Photograph: Mario Anzuoni/Reuters 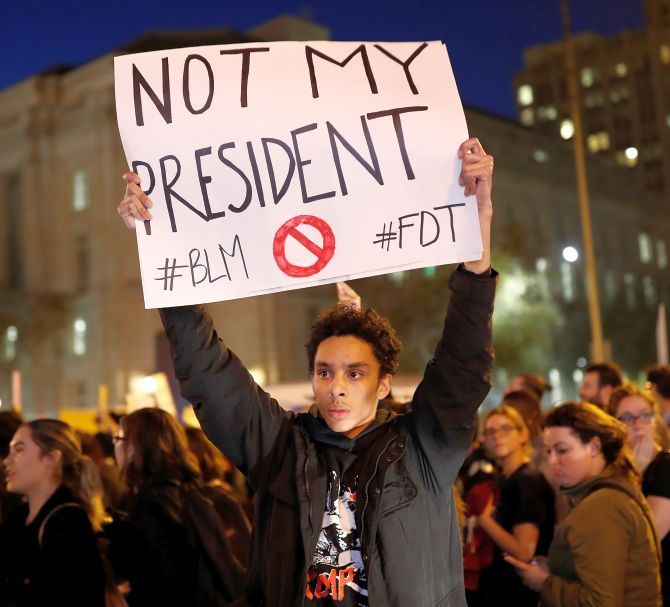 A demonstrator holds a sign during a protest in San Francisco, California. Photograph: Stephen Lam/Reuters 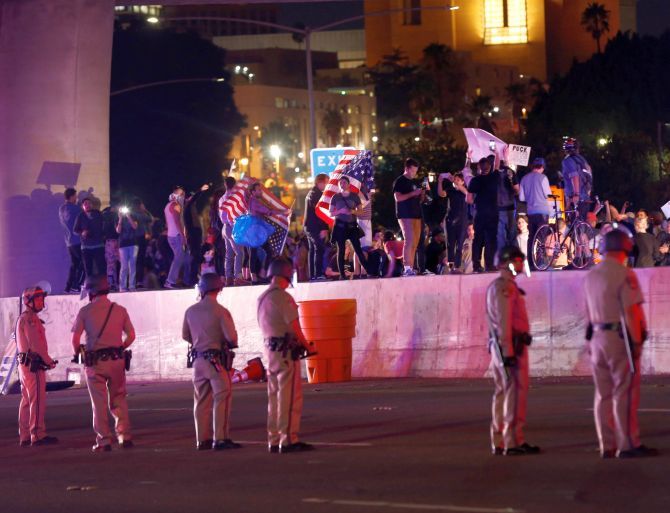 Demonstrators take over the Hollywood 101 Freeway in protest against the election of Donald Trump in Los Angeles, California. Photograph: Mario Anzuoni/Reuters 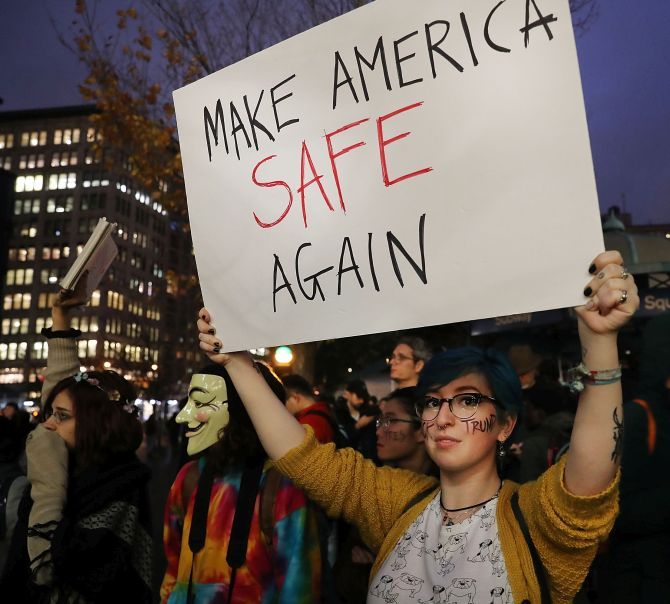 Anti-Trump protesters gather in a park as New Yorkers react to the election of Donald Trump as president of the United States. Photograph: Spencer Platt/Getty Images 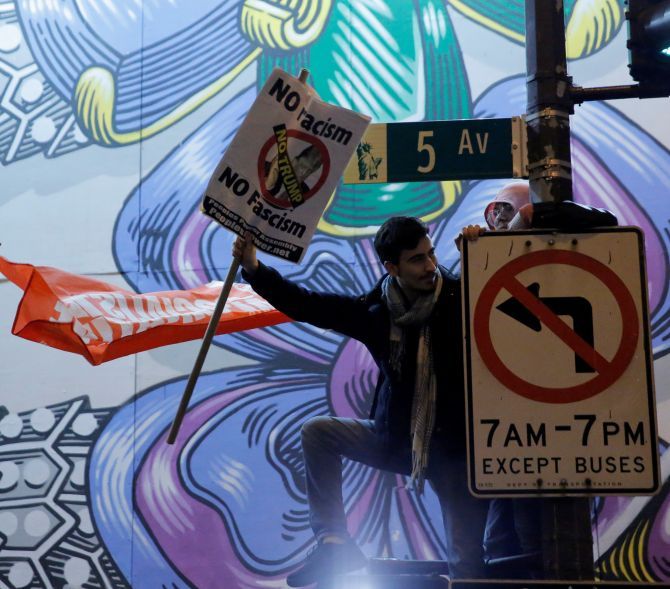 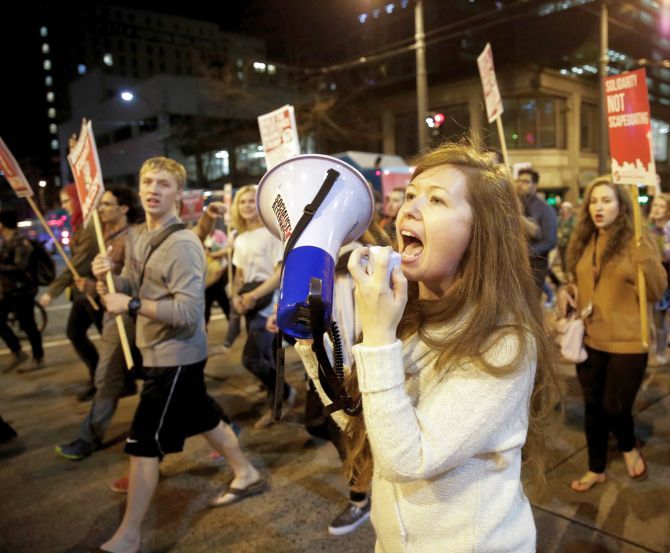 People march in protest to the election of Republican Donald Trump as the president of the United States in Seattle, Washington. Photograph: Jason Redmond/Reuters 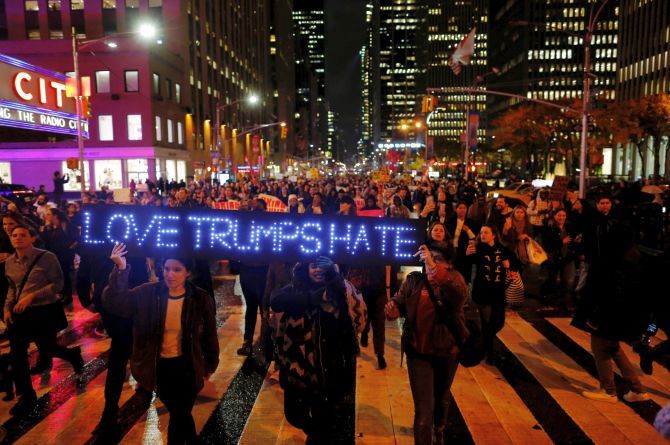 Protesters try to reach Trump Tower during a march against Republican president-elect Donald Trump in the neighbourhood of Manhattan in New York. Photograph: Eduardo Munoz/Reuters 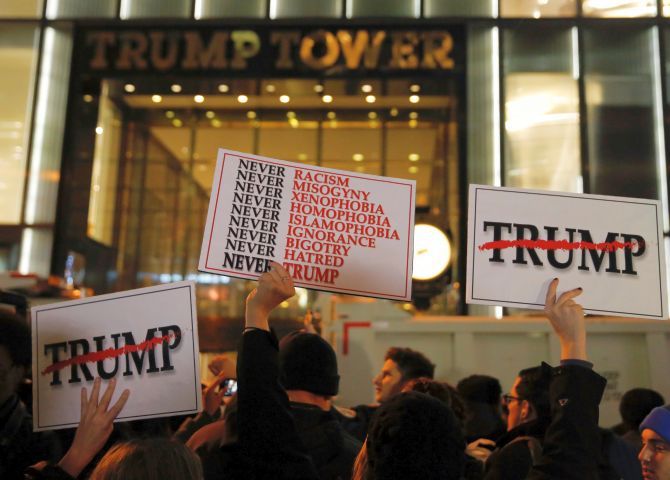 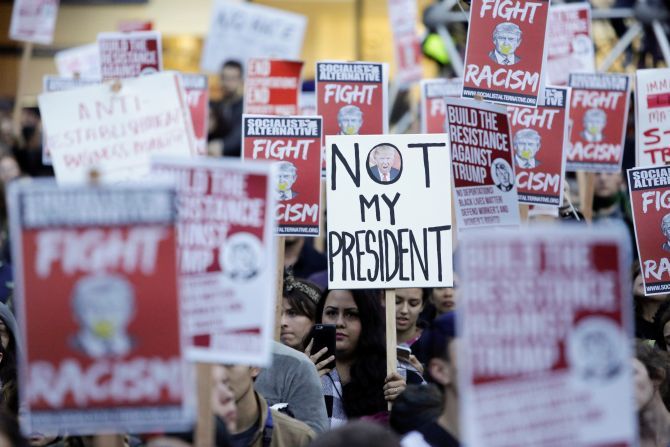 People in Seattle, Washington carried not my president and fight racism placards during the anti-Trump protest. Photograph: Jason Redmond/Reuters 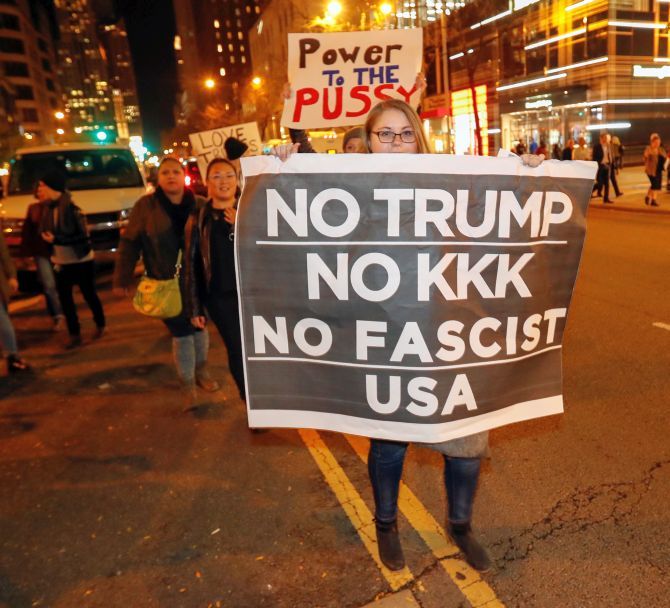 Protesters in Chicago, Illinois also carried out a rally to protest the shocking results of the elections. Photograph: Kamil Krzacznski/Reuters Love Trumps Hate was one of the many placards that protesters carried out in Union Square in New York. Photograph: Drew Angerer/Getty Images 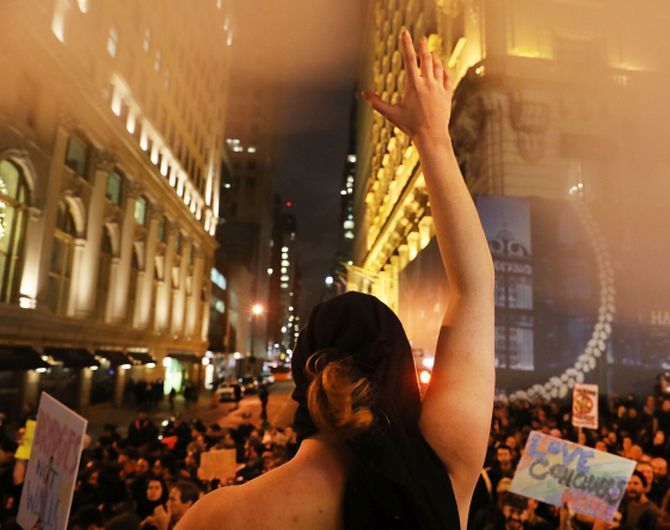 Women in large numbers took part in the rally. This was the chance for women in America to break the glass ceiling and finally elect a woman president in Hillary Clinton. Photograph: Drew Angerer/Getty Images 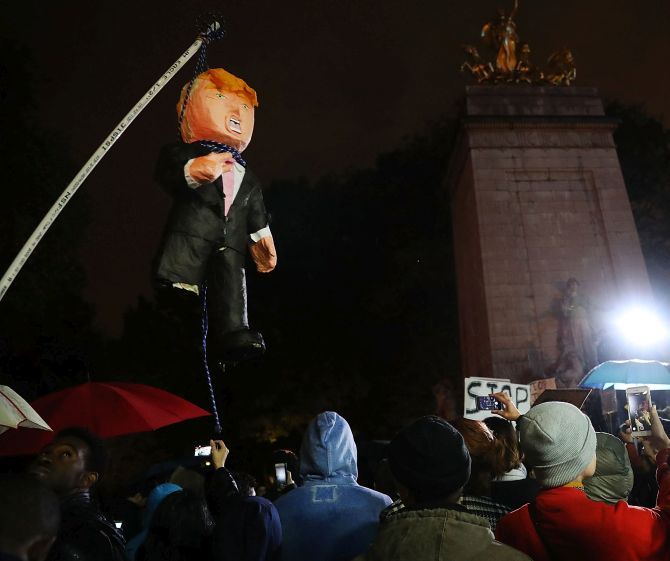 Thousands of anti-Trump protesters shut down 5th Avenue in front of Trump Tower and hanged effigies of the president-elect as a form of expressing their discontent at the results. Photograph: Spencer Platt/Getty Images 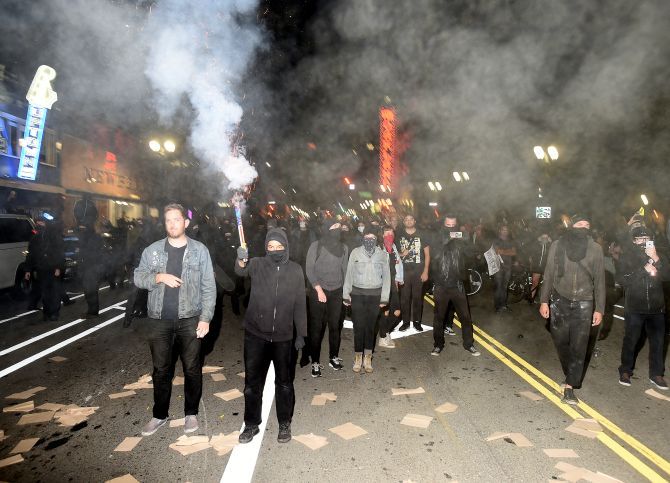 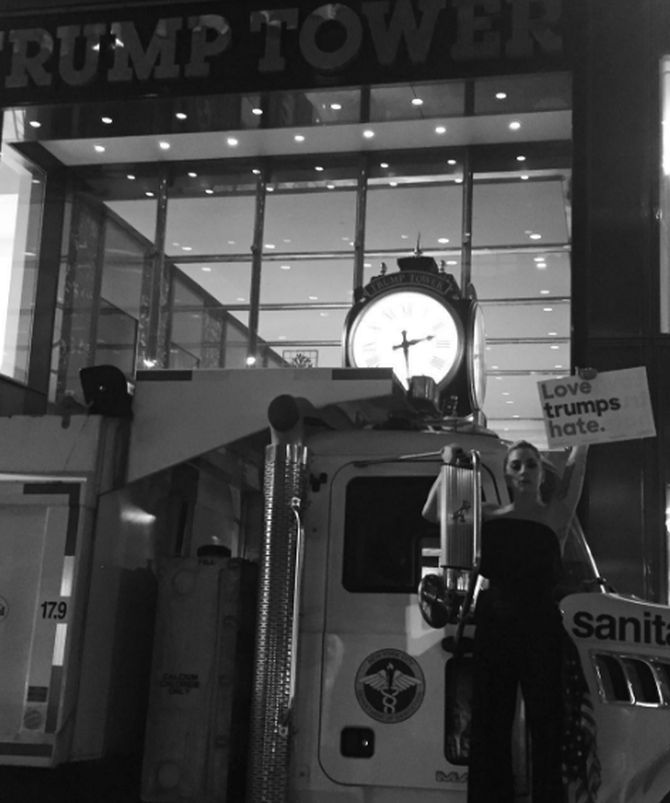 Pop singer Lady Gaga also participated in the protests. She held a Love Trumps Hate placard during the protest asking that love be given a chance. Photograph: Lady Gaga/Instagram 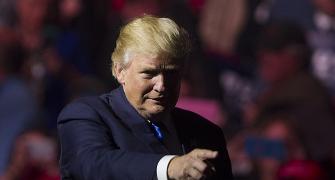 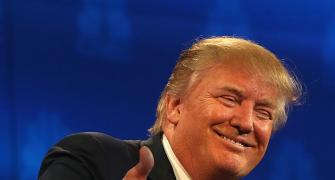 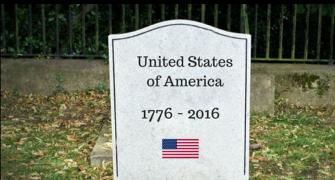 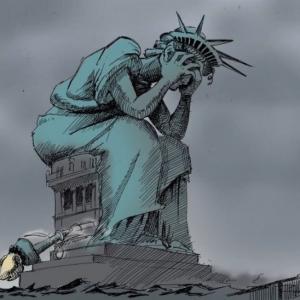 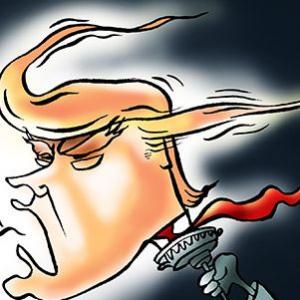