China has completed its new mega airport in Beijing after four years of construction, three months ahead of its planned grand opening.

Measuring at 1.03 million square metres -- about the size of 144 football pitches -- the Beijing Daxing International Airport will be the world's largest airport terminal, according to Xinhua News.

Here's a peak at the gargantuan structure. three months ahead of its planned grand opening. The eye-catching $11.5 billion (Rs 79,131 crore) facility will be inaugurated on September 30. The "modest" initial operational target is to accommodate 72 million passengers and two million tons of cargo annually by 2025. Photograph: ©Zaha Hadid Architects The construction for this structure began in 2014 and had more than 40,000 workers on site. The new Daxing airport is designed by the late architect Zaha Hadid and her Chinese partners. The airport resembles a massive shining starfish and billed as 'The Golden Phoenix'. Located 46 kilometres south of Tiananmen square, the new airport will operate at full capacity in 2025, with four runways. Photograph: ©Zaha Hadid Architects A worker walks inside the terminal hall of the Beijing Daxing International Airport in Daxing district. The airport authority has promised a distance of no more than 600 metres between security checkpoints and the remotest gates. The central body of the airport will be the main hub where passengers can find the restaurants, shops and airport security, while each 'arm' of the airport will lead out to the boarding gates and the eight runways. The interiors are just as impressive as the airport's quirky shape, with high ceilings and swirling-type architectural features throughout. Photograph: Yin Liqin/CNS via Reuters Chinese construction workers work on a building outside the main terminal of the new Beijing Daxing International Airport. Its sizeable capacity will put it on par with Hartsfield-Jackson Atlanta International Airport, the world's largest airport. Photograph: Kevin Frayer/Getty Images 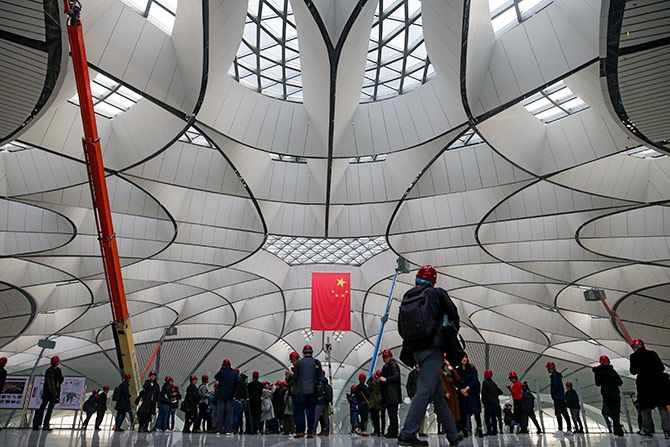 Visitors are seen under a Chinese flag at the terminal hall of the Beijing Daxing International Airport during a media tour. The airport will also be equipped with cutting-edge technologies. Facial-recognition devices and real-time baggage tracking will reportedly be used during the security and immigration screenings. State television channel CCTV reported that the SkyTeam alliance, which includes Delta Air France and KLM, will move over to the new airport along, along with its partner Eastern Airlines and China Southern Airlines. Photograph: China Daily via Reuters 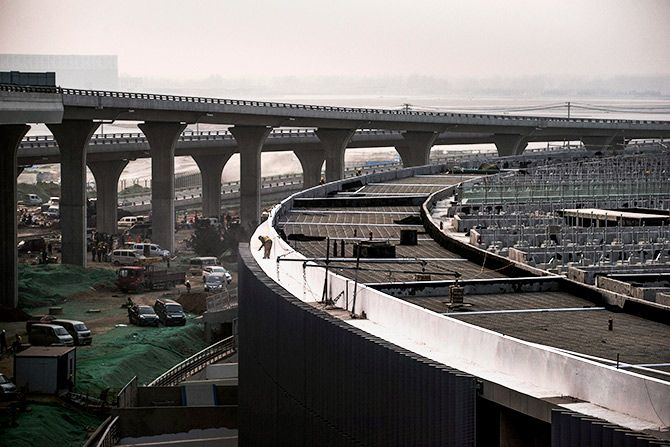 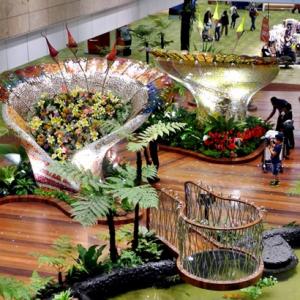