Priyanka rides boat to test political waters in UP

Seeking to navigate the Congress towards regaining its political moorings in the crucial state of Uttar Pradesh, Priyanka Gandhi Vadra on Monday began her 'Ganga Yatra' on boat with a blistering attack on Prime Minister Narendra Modi and urged voters to bring in a government that works for them. The 47-year-old Congress general secretary, clad in a green cotton saree and pink blouse, interacted with a cross section of people, including students, and invited some of them to join her on the motorboat as she undertook her much anticipated ride from the Manaiya Ghat in Kachnar tehsil of Prayagraj district.

Addressing the people at Sirsa Ghat and other places where she halted during the boat-ride, Priyanka took a swipe at Modi's "main bhi chowkidar' campaign, saying "chowkidars are for the rich, not for farmers", and alleged that the issues of religion and caste are being raised as the government has failed on the development front.

"Unki (prime minister) marzi apne naam ke aage kya lagaen. Mujhe ek kisan bhai ne kaha ki 'dekhiye chowkidaar toh ameeron ke hotey hain, hum kisan toh apney khud chowkidaar hotey hain ("It is up to him what prefix he uses in his name. Yesterday I met a group of farmers. One of them told me, chowkidars are for the rich. We farmers are our own chowkidars)," she said. 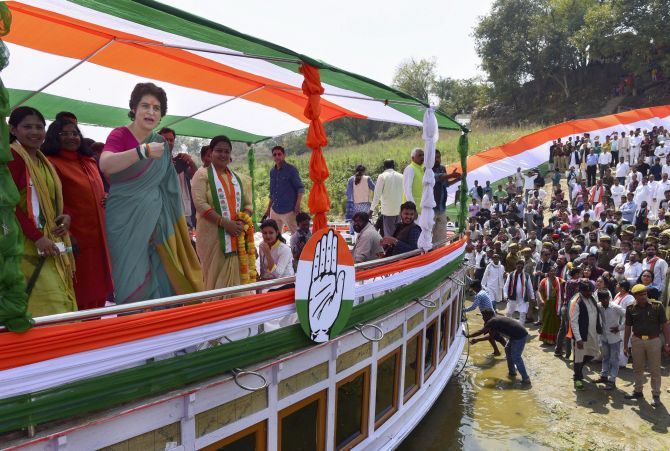 Citing Bharatiya Janata Party's promises which have remained "unfulfilled", she asked: "Have two crore jobs been given... has our prime minister ever come here... he has been travelling all over the world."

"They think that by misleading you all they will remain in power. All institutions are being destroyed...the country cannot run like this," she said. "I could have also sat at home. I have come out as the country is in danger, the country's Constitution is in danger... so vote wisely," Priyanka said.

"We have the intention, not 'jumle' (rhetoric) and we worked and showed it in Madhya Pradesh and Rajasthan on loan waiver promise," she said and asserted that "my brother Rahul Gandhi does what he says".

Priyanka, who kicked off the Lok Sabha election campaign with her three-day visit to eastern Uttar Pradesh, will cover a distance of 100 km by boat in Ganga from Allahabad to Varanasi, the parliamentary constituency of Prime Minister Narendra Modi, and will also visit several temples while literally testing the political waters in UP where the Congress has been in wilderness for nearly three decades. 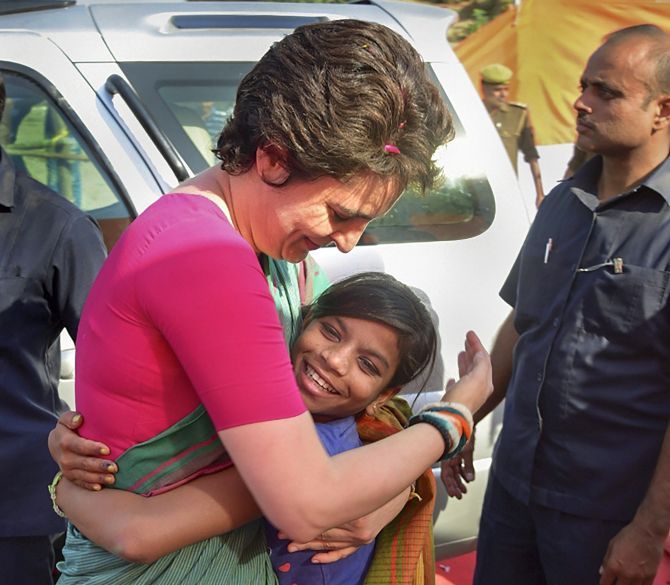 IMAGE: Priyanka interacts with a young girl during her campaign in Prayagraj. Photograph: PTI Photo

She started her river journey with a visit to the Sangam and performing puja along with party leaders at the Bade Hanuman Mandir, popular as Letee Hanuman Ji' near Prayagraj Sangam. Taking a halt at the Dumduma Ghat under the watchful eyes of SPG personnel escorting her, Priyanka, who was accompanied by other party leaders, said she had come here to learn about people's problems rather than giving speeches. IMAGE: Gandhi was quite the hit with the young ones during the rally; she made time to hug the children. Photograph: ANI Photo

"Bring a government that works for you. Form a Congress government so that your problems could be looked into," she said, adding that she is aware that sand mining rights are not given to boatmen who are 'ganga putra' and added that "Rahul has said that a separate ministry for them will be created".

At the Sirsa Ghat, she said the electorate has witnessed Congress governments during which schemes like MNREGS were launched and regretted that jobs have become scarce in the present times. After a night halt in Sitamarhi in Bhadohi district, the Congress leader will resume her onward journey on Tuesday morning that will culminate in Varanasi on Wednesday.

Sitting cross-legged on the motorboat, the Congress leader was all ears as the locals residing on the river bank apprised her of their issues.

"River Ganga is a symbol of truth and equality... Ganga-ji is the lifeline of Uttar Pradesh and with her support I will reach you," the party's newly appointed general secretary had said in an open letter on March 17. Arriving from Lucknow on Sunday night to a rousing reception by party workers who shouted slogans of 'dahan karo Modi ki Lanka, behen Priyanka behen Priyanka', the Congress leader tweeted an image of the room at Swaraj Bhawan.

"Sitting in the courtyard of Swaraj Bhawan, I can see the room where my grandmother (Indira Gandhi) was born. While making me sleep in the night, she used to tell stories of Joan of Arc. Her words reverberate even today. She used to say -- become fearless and everything will be alright," Priyanka Gandhi Vadra said in a tweet. 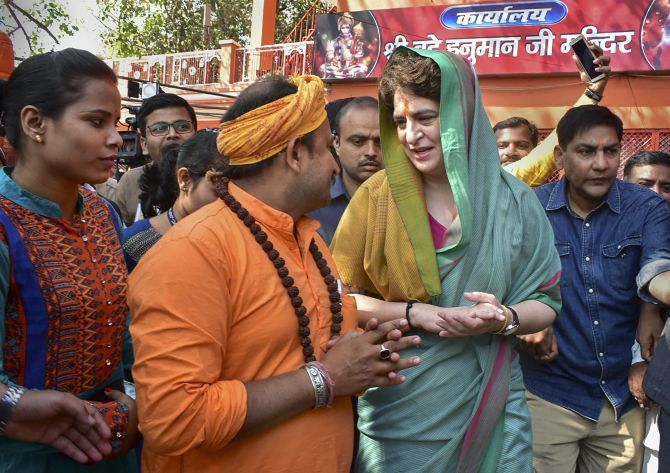 Addressing people and party workers at Sitamarhi in Bhadohi district on Monday, Priyanka said the BJP is citing the same excuse that it used to make during the previous election. "They blame the Congress for all problems, like unemployment...but you are running the government for five years, what have you done?" she posed.

The crowd responded saying "janata ko dhokha diya". She told the audience that "Rahulji wants the welfare of the people and does not run after power". IMAGE: Priyanka's visit has been slammed by the BJP who said that every election is a "picnic" for the Gandhi family. Photograph: PTI Photo

Priyanka said, "Like you, I too am sick of this government which undermines our Constitution, institutions and does not care for the people.... Responsibility is yours. Chunao nahi chunauti hai (It not an election but a challenge)."

"I know my brother. We have faced lots of struggles and martydom of our father and sacrifice by our family members," she added.

The BJP, however, ridiculed Priyanka Gandhi Vadra's boat campaign, saying every election is a "picnic" for the Gandhi family.

Polling will be held in seven phases in Uttar Pradesh from April 11 to May 19. Results will be announced on May 23.