News
Business
Movies
Sports
Cricket
Get Ahead
Money Tips
Shopping
Sign in  |  Create a Rediffmail account
Rediff.com  » News » Can Priyanka take Congress beyond its 2 bastions in UP?

Congress leaders are confident that Priyanka would act as a catalyst for the party and boost the sagging morale of cadres to put up a spirited fight against the BJP and also the SP-BSP pre-poll alliance which had already shut its door on the Congress, reports Virendra Singh Rawat. 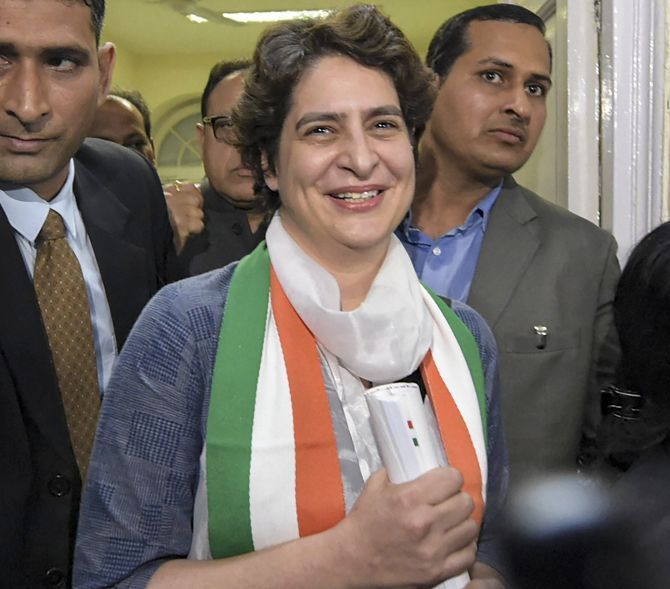 IMAGE: Congress general secretary Priyanka Gandhi Vadra attended her office in the Congress headquarters in New Delhi for the first time after her appointment to the party post, on February 6, 2019. Photograph: Vijay Verma/PTI Photo

In the run-up to the 2014 Lok Sabha polls, Priyanka Gandhi Vadra, daughter of former Congress president Sonia Gandhi and sister of the party’s heir apparent Rahul Gandhi, had courted a controversy by using the word 'neech (lowly)' while making a statement on then Bharatiya Janata Party prime ministerial bet Narendra Modi.

Replying to Modi’s diatribe against former PM and her father, the late Rajiv Gandhi, Priyanka, who was then overseeing poll management for Sonia and Rahul in Rae Bareli and Amethi constituencies respectively, had flayed the BJP leader for indulging in neech rajniti (lowly politics)” and said the people would give a befitting reply to him.

However, her comment was appropriated by the BJP as a casteist slur against Modi and his humble background.

The top Congress leadership, including Rahul, later sought to downplay the controversy by saying she referred to deeds and ideology and not caste, yet it proved too little, too late.

The saffron party went on to sweep the general election, and the Congress was reduced to two seats in Uttar Pradesh, down from 22 in 2009.

Priyanka has now been anointed the party’s general secretary in charge of eastern UP for the 2019 Lok Sabha polls, which is morphing into a tri-polar contest between the BJP, the Congress and a loose coalition of regional parties.

Since the emergence of Priyanka on the political scene almost two decades back, there have been constant rumours of her entry into active politics beyond the Congress pocket boroughs of Amethi and Rae Bareli.

Occasionally, posters have come up demanding pitching Priyanka against Modi as the BJP's rollicking election machinery won one state after the other following the 2014 polls. In her new avatar, she is expected to make the party’s organisation in eastern UP fighting fit, and also woo the Muslims, Dalits and upper caste voters.

The Congress’s recent successes in the Hindi heartland states of Rajasthan, Madhya Pradesh and Chhattisgarh, where it dethroned the BJP, have already lifted the sagging morale of the party’s cadres in UP, which elects 80 Lok Sabha members and is key to any party hoping to form the government at the Centre.

The Congress, the ‘resident’ ruling party in UP, got reduced to a pale shadow of its glorious past with the emergence of caste-based politics in the late 1980s, especially after Mulayam Singh Yadav became chief minister on December 5, 1989, in the Janata Dal government.

Thereafter, it had been a perpetual decay for the party in UP.

In the recent polls, the Congress’s tally continued to dwindle thick and fast with the vote share in the 2012 and the 2017 UP polls standing at a lowly 13.26 per cent and 6.2 per cent, respectively.

In the 2014 Lok Sabha polls, the party’s vote share stood the lowest at 7.53 per cent among the BJP, the Samajwadi Party and the Bahujan Samaj Party.

While Priyanka has been anointed eastern UP in charge, former Union minister Jyotiraditya Scindia has been assigned western UP for a turnaround.

Although the party is yet to officially announce the respective constituencies, the two leaders would manage, according to sources, 40 constituencies each.

Nonetheless, her elevation has already recharged the party’s UP unit, which was habituated to getting bruised at the hustings every successive election.

Congress leaders are confident that Priyanka would act as a catalyst for the party and boost the sagging morale of cadres to put up a spirited fight against the BJP and also the SP-BSP pre-poll alliance which had already shut its door on the Congress.

In fact, the SP-BSP alliance minus the Congress was one of the major factors, which prompted the grand old party to deploy all at its disposal to contest the polls.

However, Priyanka has a tough task cut out for her.

In fact, the past performances of the Congress in Amethi and Rae Bareli, under her wing, were not stellar either.

“The Congress has been down in the dumps in UP and its cadre base has depleted beyond a few party strongholds such as Amethi and Rae Bareli. If Priyanka taking up an active election management role in UP is of no consequence, then why are the BJP and its leaders so rattled?” Pradhan wondered.

On Priyanka’s baggage of a string of controversies involving her husband, Robert Vadra, Pradhan opined such cases did not affect the voting pattern.

“Every party has its set of leaders fighting cases of corruption, be it the BJP, the SP or the BSP. In fact, Priyanka’s active role has the potential to even wean away the Muslim votes of the SP-BSP combine, since the minorities are wary of Mayawati, who had in the past thrice joined hands with the BJP,” he said.

All India Congress Committee spokesperson and former UP legislator Akhilesh Pratap Singh told Business Standard it was the collective aspirations of tens of millions of people to see Priyanka take up an active role in politics, especially UP.

“Her entry will mark the beginning of the end of the BJP’s self-centred and hate politics, which would be replaced by the Congress’s generic polity of people’s welfare,” Singh said.

Whereas time will tell whether she is able to recreate Indira Gandhi’s magic, the SP-BSP combine, which was looking to sweep the Lok Sabha polls in UP, is now likely to restructure its pre-poll alliance road map to factor in Priyanka and her (over)hyped charisma. 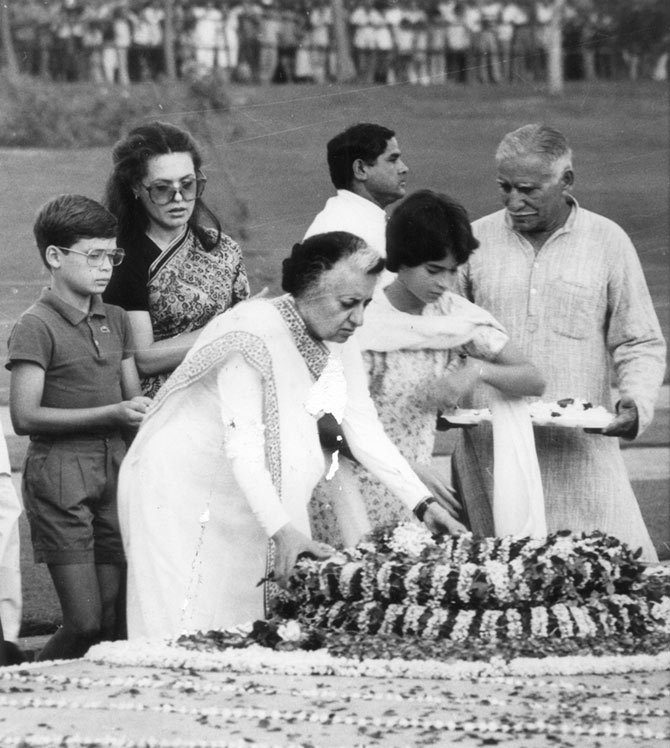