Battling tidal waves as high as 10 metres and strong winds while trying to stay afloat in the cyclone-hit rough Arabian Sea for almost 12 hours, workmen rescued from a sinking barge near Mumbai narrated their horrifying experience in their quest for survival. 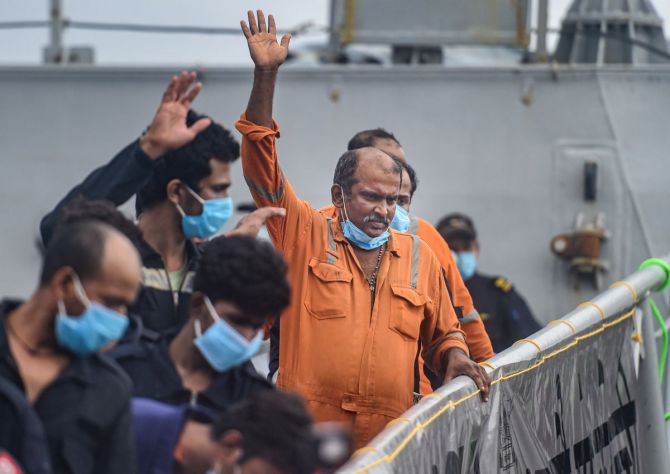 Some of them said they had almost lost the hope of making it alive back home.

The warship INS Kochi arrived in Mumbai on Wednesday with 125 workmen rescued from barge P305, an accommodation barge that sank amid the cyclone Tauktae fury.

Of the 273 people on the ill-fated barge, 184 have been rescued so far by the Indian Navy. 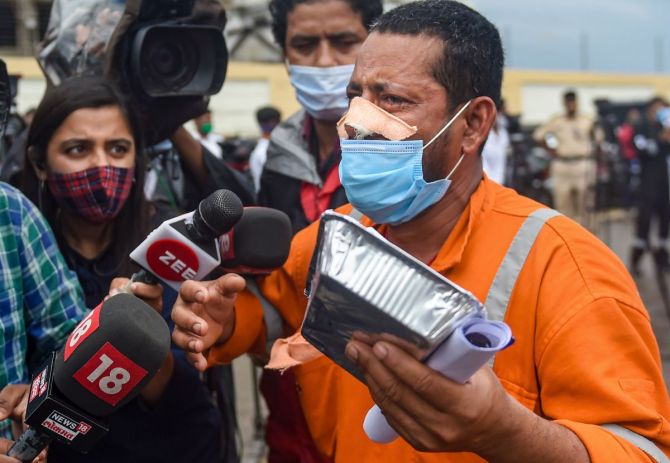 IMAGE: A rescued crew member of barge P305 gets emotional while talking to media after he was brought at Mumbai Naval Dockyard, in Mumbai, on Wednesday. Photograph: Shashank Parade/PTI Photo

"It was a horrific situation on the barge. I had not thought I would survive. But, I swam in the waters for seven to eight hours with the determination to stay alive and was rescued by the Navy," workman Manoj Gite told reporters in Mumbai.

Gite, 19, a resident of Kolhapur, said as the barge started sinking, all workmen got worried and he along with others wore a life jacket and jumped into the waters.

The workman, who had joined as a helper on the barge only last month, said said he lost all his documents and mobile phone in the cyclonic storm. Asked if he would return to the rig again, Gite said he is not keen to go back and is contented to be alive after the nightmarish experience.

Another workman, who was injured in the incident, thanked the Indian Navy for saving his life.

"It is because of the Navy that we all are alive and safe today, otherwise we don't what would have happened to us," the workman said while fighting back his tears. 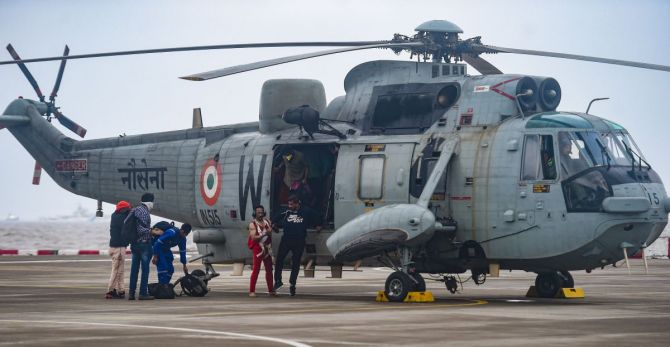 One of the officials on the barge had claimed the cyclone was 'not huge', another workman said.

"The official is now missing. We tried to search for him, but in vain," he said.

Another rescued workman said as their barge started sinking, he jumped into the waters in the middle of the night and tried to stay afloat. 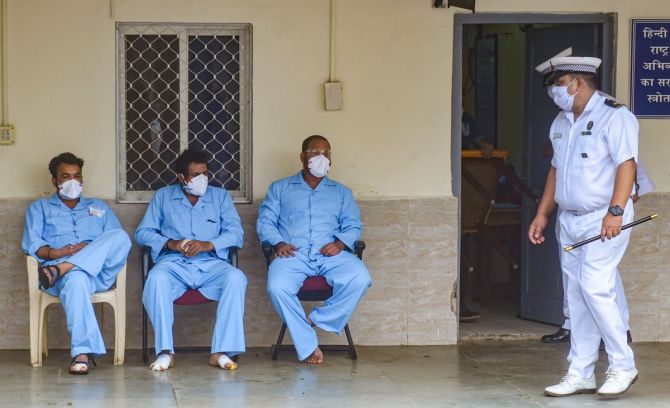 IMAGE: Rescued crew members of barge P305 after they were brought at INS Shikra in Mumbai. Photograph: Shashank Parade/PTI Photo

"I swam for about 12 hours before the Navy team rescued me," he said.

Another personnel, who works as a fitter at the rig, said the sea waves were higher than the height of the barge and there were high speed winds blowing around.

"Before the Navy ship arrived, we were not sure what was going to happen. As we saw the naval ship coming towards us for rescue, our confidence went up. I was sure they will save me, hence I jumped into the waters and started swimming," he said. 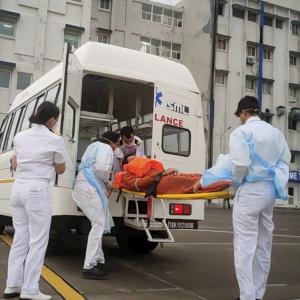 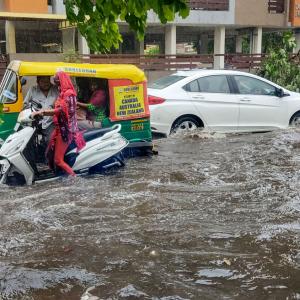 Cyclone Tauktae to bring rain in many states: IMD