Cyclone Tauktae weakens; to bring rain in many states: IMD 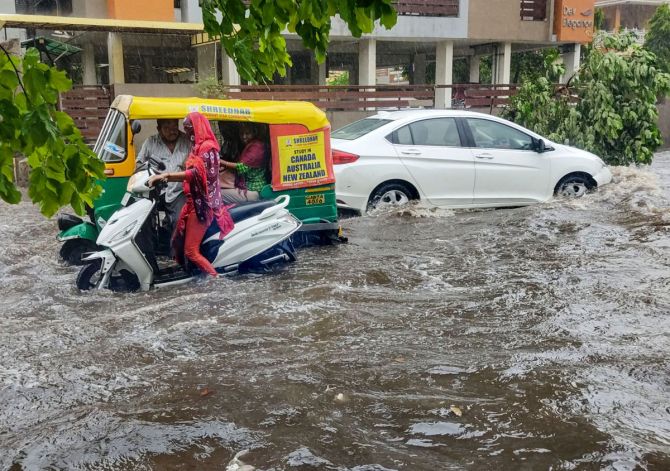 IMAGE: Commuters try to wade through a flooded road after heavy rainfall due to cyclone Tauktae in Ahmedabad, on Tuesday. Photograph: PTI Photo

After causing widespread rain in Gujarat, the cyclone is expected to bring showers in many other states also, including Rajasthan, Uttarakhand, Himachal Pradesh, Uttar Pradesh and Delhi, due to its interaction with the western disturbance, the IMD said.

The cyclonic 'depression' was located around 60 km west-southwest of Udaipur in Rajasthan, and 110 km of Deesa in Gujarat, the IMD said in its morning bulletin.

'The remnant of the system is very likely to move further north eastwards across Rajasthan to west Uttar Pradesh during the next two days,' it said.

The depression will bring light to moderate rainfall at most places in east Rajasthan, with very heavy rainfall at isolated places on Wednesday, the IMD said.

Due to its interaction with the western disturbance it is also very likely to cause rainfall in Uttarakhand, with heavy to very heavy rainfall at isolated places over Himachal Pradesh, Haryana, Chandigarh, Delhi, west Uttar Pradesh and west Rajasthan during the next 24 hours, it said.

Squally winds with speed reaching 45-55 kmph gusting to 65 kmph are likely to prevail over east Rajasthan and adjoining Gujarat region during the next 12 hours, it further said.

The landfall process of the 'eye' of the extremely severe cyclonic storm Tauktae, which hit the Gujarat coast in Saurashtra region between Diu and Una, ended around 1.30 am on Tuesday.

As the cyclone passed through Gujarat, it left behind a trail of destruction with at least 13 people losing their lives, thousands of trees uprooted, houses destroyed, and electric poles massively damaged.

The cyclone also caused rainfall in more than 200 talukas of Gujarat.

Various areas in the districts of Kheda, Anand in central Gujarat, Surat, Navsari in south Gujarat, and Gir Somnath, Bhavnagar and Sabarkantha received over 100 mm rainfall in 24 hours till 6 am on Wednesday, the State Emergency Operation Centre said.

Nadiad in Kheda received the highest 226 mm rainfall during the period, followed by Gir Gadhada and Una in Gir Somnath district, which received 185 mm and 177 mm downpour, respectively, it said.

As a precautionary measure, the state government had shifted over two lakh people to safety.

In his media interaction on Tuesday evening, Chief Minister Vijay Rupani said the next few days will be dedicated to restoring the damages caused by the cyclone.

Amreli, Gir Somnath, Junagadh, Porbandar, Rajkot, Bhavnagar and Botad in Saurashtra region remained among the worst affected districts due to the cyclone.

As per the data provided by the CM on Tuesday evening, 5,951 villages suffered power blackout.

Around 70,000 electric poles fell and four 220-KV sub-stations were yet to restart out of five that suffered damage due to the cyclonic storm.

Rupani said 68 out of 165 66-KV sub-stations were also damaged and later made functional.

Out of 425 COVID-19 hospitals located in the affected areas, 122 faced power outage. The electricity supply was restored in 83 of them, while 39 others were working on backup arrangements, he said. 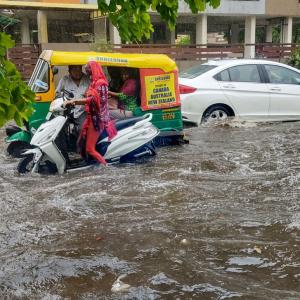 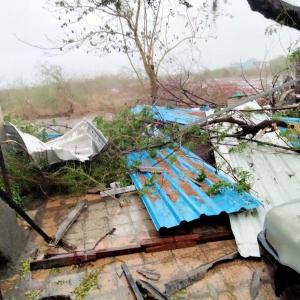