Twelve more people have tested positive for coronavirus -- six in Kerala and three each in Karnataka and Pune -- state authorities said on Tuesday as the total cases went up to 59. 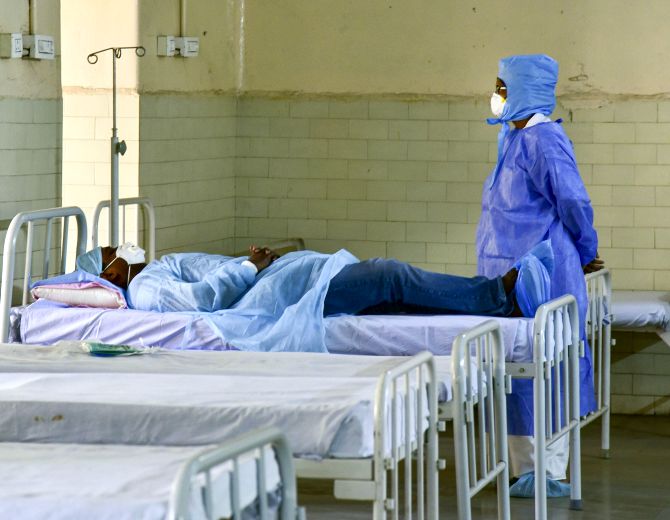 IMAGE: A medic looks on at a patient who has shown positive symptoms for coronavirus at an isolation ward in Hyderabad. Photograph: PTI Photo

The health ministry said the total number of confirmed cases has risen to 50, adding the rest are being retested for confirmation.

Once the fresh cases declared by the state governments are taken into account, the figure will go up to 59.

In Karnataka, chief minister B S Yediyurappa said four persons have been confirmed for coronavirus, including three new cases.

In the morning, 58 Indians were brought back home from coronavirus-hit Iran in a military transport aircraft of the Indian Air Force.

It also brought swab samples of 529 Indians to carry out laboratory tests and check whether they have coronavirus infection.

Those who returned have been quarantined at a medical facility in Hindon.

Announcing the latest cases in Kerala at a media interaction in Thiruvananthapuram after a special cabinet meeting held to discuss the coronavirus situation, chief minister Pinarayi Vijayan said at least 1,116 people are under observation -- 149 in isolation wards of various hospitals and 967 under home quarantine.

The fresh cases are friends and relatives of an Italy-returned couple and their son who had on Saturday tested positive for the deadly virus along with two other kin staying with them at their home in Rane in Pathanamthitta district, health minister K K Shailaja, who was also present, said.

The aged parents of the couple are among the six latest positive cases, she said. 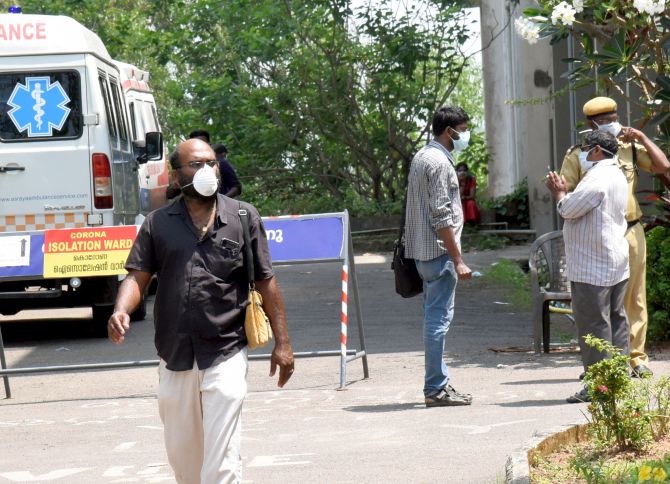 In Jaipur, the combination of lopinavir and ritonavir, both second-line HIV drugs, was administered was administered on an elderly Italian couple undergoing treatment for Covid-19 at the SMS Hospital.

The Drug Controller General of India approved "restricted use" of these medications for treating those affected by novel coronavirus after the Indian Council of Medical Research sought their emergency approval.

SMS Hospital Medical Superintendent Dr D S Meena said the Italian man and his wife had developed severe respiratory problems following which a decision was taken to put them on the combination of lopinavir and ritonavir.

According to officials, consent of the patients was taken before the drugs were administered.

This combination along with other drugs has been used in clinical trials in China, where coronavirus first emerged, and Thailand for treating Covid-19 patients.

In Karnataka, a software engineer who returned from the United States on March 1 tested positive on Monday, becoming the first COVID-19 patient in the state.

According to health department officials, his wife and daughter too tested positive for the virus on Tuesday.

Another person, who had travelled from America via London and arrived in Bengaluru on March 8, also tested positive, they said.

State health minister Sriramulu said the family members of the four persons have been quarantined.

Using a hashtag of #CoronaVirusOutBreak, the minister said, "I appeal to the people to make sure that this disease does not spread further."

A day after two persons related to each other tested positive for novel coronavirus in Pune, the Maharashtra health department said.

This takes the number of confirmed coronavirus cases in Pune district as well as in Maharashtra to five. IMAGE: Foreign tourists being checked in the wake of coronavirus, during their visit to Taj Mahal in Agra. Photograph: ANI Photo

One of them is related to the two confirmed coronavirus patients and had returned from Dubai with them, while the other is driver of the cab in which the family had travelled from the Mumbai airport to Pune, said district collector Naval Kishore Ram.

The condition of all of them was stable and they were undergoing treatment in the isolation ward of civic-run Naidu Hospital, he said.

After Mizoram, Manipur has shut its border with Myanmar indefinitely amid the novel coronavirus scare.

Neighbouring Mizoram had on Monday also sealed its borders with Myanmar and Bangladesh, and banned the entry of foreigners to prevent the spread of the deadly coronavirus.

In Kerala, schools and colleges and cinemas will remain closed in the state till March 31. Classes 1 to 7 of all schools -- state, CBSE and ICSE boards -- will remain shut and examinations which have begun for them will be put on hold.

Examinations for class 10, class 12 and vocational higher secondary will, however, continue. Final examinations of class 8 and 9 also will proceed as usual.

Temple and church festivals, which witnesses mass gatherings should be avoided, but rituals can be held in a low key manner, Vijayan said.

As the hill temple Lord Ayyappa at Sabarimala will reopen on March 13, monthly pujas can be held, but at this juncture devotees should avoid darshan, he said.

The coronavirus threat also cast a shadow on Holi celebrations which were subdued across the country.