Judicial work remained paralysed for the third consecutive day in the six trial courts here on Wednesday, while the Bar Council of India alleged that protests by the police on Tuesday over the November 2 clash between advocates and cops at Tis Hazari Court Complex and subsequent incidents seem to be 'politically motivated'. 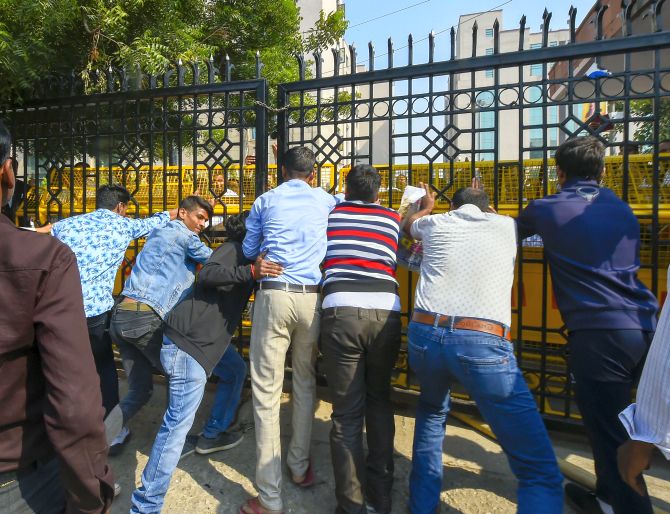 IMAGE: People push the gate of the Saket District Court Complex to enter the court premises, closed during a protest by lawyers over the recent Tis Hazari Court clashes, in New Delhi, on Wednesday. Photograph: Kamal Singh/PTI Photo

"The strike will continue on Thursday," said advocate D S Kasana, Secretary of Co-ordination Committee of All District Courts Bar Association while asserting that they will not relent unless the Assistant Sub-Inspector who allegedly fired at a lawyer is arrested.

The ongoing strike by lawyers brought hardship for the litigants, who were not allowed to enter the court premises in Saket and Rohini, and those in the Patiala House Court complex managed to enter only in the afternoon after the lawyers association relented.

The Rohini Court complex in north-west Delhi also witnessed a drama as one lawyer took off his clothes and poured kerosene on his body threatening to immolate himself, while another climbed atop a building in the premises. 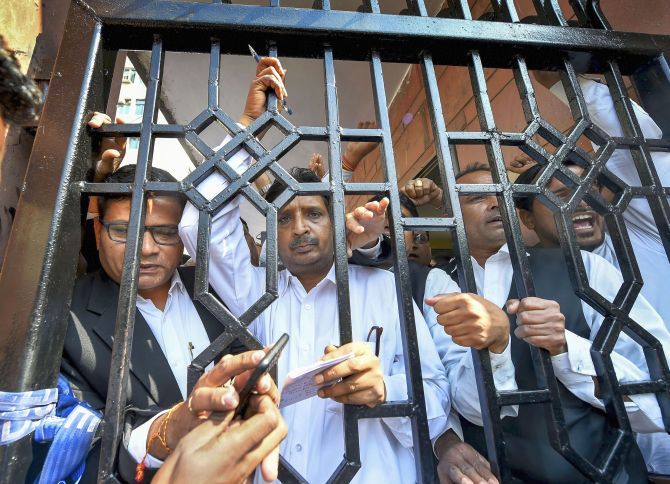 While lawyers on strike blocked gates and prevented litigants from entering the court premises, the BCI, apex body of advocates, came out with a press release, demanding arrest of the guilty police officials within a period of one week for the Tis Hazari incident.

Hours later, BCI Chairman Manan Kumar Mishra, rushed to the Supreme Court premises and addressed the reporters saying no incident of violence involving lawyers, the police and the public will be tolerated and action will be taken against the guilty.

He also accused policemen of making provocative statements against judges and lawyers during their protests outside the police headquarters on Tuesday.

There was no protest on Wednesday by the police and sources said that cops deployed in courtrooms to assist in judicial work, were absent in Saket, Rohini and Tis Hazari courts. IMAGE: A man climbs a locked gate to come out of the Saket District Court Complex during the protest. Photograph: Kamal Singh/PTI Photo

While reports were pouring in from various trial courts, all eyes in the afternoon were on the Delhi high court which clarified that its November 3 order, not to take coercive steps against lawyers, was only in relation to the two first information reports lodged on November 2 with regard to the clash between the police and lawyers at Tis Hazari Courts Complex.

The Centre had urged the high court to clarify that the November 3 order would not be applicable to subsequent incidents of violence.

The high court also assured the Delhi police that the observations and remarks made in the November 3 order against its officials were only 'prima facie' and 'tentative' in nature and the final findings would be delivered uninflenced by them based on the facts and evidence.

Howvever, a bench comprising Chief Justice D N Patel and Justice C Harishankar, expressed anguish over the 'dissonance and friction' prevailing between the bar and the police -- which represent and constitute 'the preserver and the protector of the rule of law' and suggested a meeting between 'responsible representatives' of both sides to 'sort out their differences amicably, on the basis of discussion and deliberations'.