The mortal remains of Union Minister Ram Vilas Paswan, a man for all seasons and one of the tallest leaders spawned by the Dalit community, were consigned to flames in Patna on Saturday with full state honours. 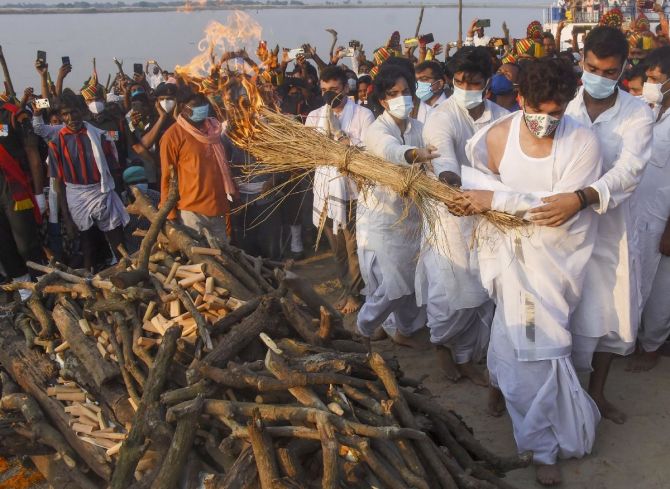 A sea of people could be seen, besides dignitaries led by Bihar Chief Minister Nitish Kumar and Union Minister Ravi Shankar Prasad, at the cremation site on the banks of the Ganges in the city that has been a witness to the Lok Janshakti Party founders long journey -- from a young MLA of the socialist party in the late 1960s to having served under six prime ministers.

A large number of supporters had come to the Digha ghat from his pocket borough Hajipur, situated right across the river, which Paswan had nurtured since his Lok Sabha debut in 1977 when he won with a record margin. 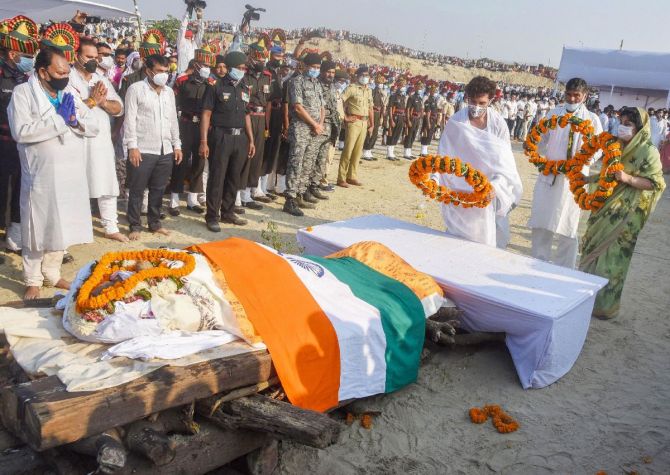 IMAGE: Chirag, along with his mother, pays tribute to his father before the cremation. Photograph: PTI Photo

He gave up the seat for his younger brother Pashupati Kumar Paras last year and chose the Rajya Sabha route for re- entering Parliament.

The sight of commoners standing chock a block, teary-eyed and eager to catch the last glimpse of their leader, unmindful of the threat posed by the COVID pandemic and reprimands of security personnel anxious to enforce social distancing, bore testimony to the popularity of the man, known as an 'ajaat shatru' (one with no enemies) in the vicious politics of Bihar. 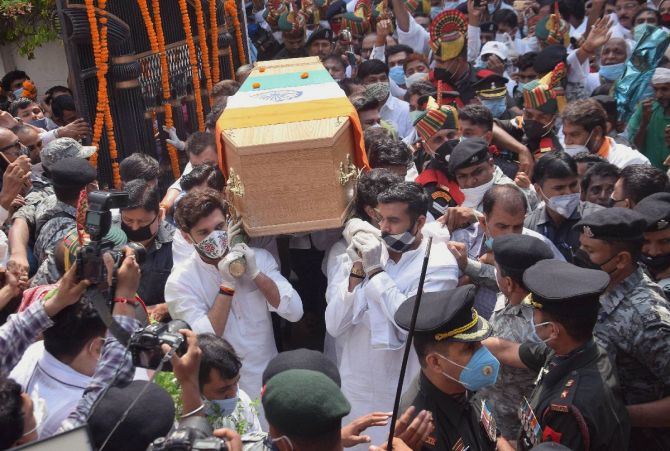 Many climbed atop a steamer anchored nearby while an even larger number could be seen standing, precariously, on the decrepit embankment built along the river after they were thwarted by the administration from crowding the ghat.

Paswan had breathed his last at a hospital in New Delhi on Thursday evening and his body was brought in Patna on Friday. 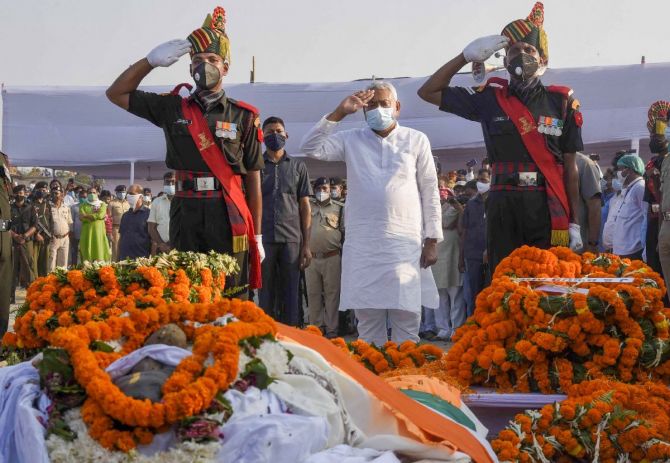 Dignitaries offered their tributes at the airport and also, later, at the Vidhan Sabha premises.

The body was brought for the last rites to Janardan Ghat in the Digha locality in a massive procession from his residence in Shri Krishna Puri, about 3 km away.

The bungalow of Paswan, who famously kept his doors open for all despite the high offices he held for much part of his political career, remained teeming with visitors, many of them common citizens whom the leader had helped with getting a job, getting a critically ill relative treated at a top medical facility, or with financial help which made the marriage of their daughters possible. 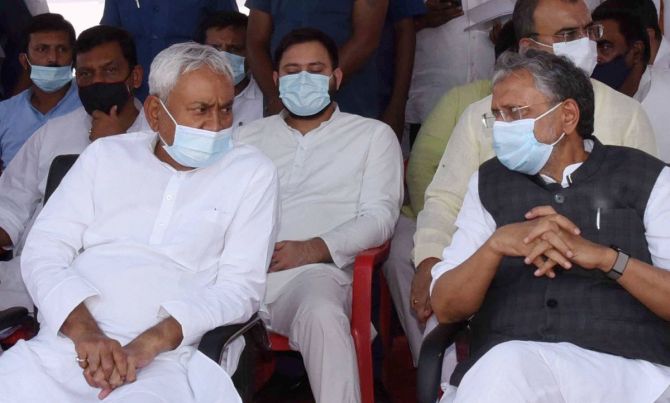 Many also recalled the contributions made by Paswan as a minister -- Hajipur becoming a zonal headquarters of the railways, mobile phones becoming affordable, and greater efficiency in the public distribution system that was crucial during the nationwide lockdown.

The last rites were performed by Paswan's son and political heir Chirag, who has taken a big gamble by deciding to plough a lonely furrow in the assembly elections that are days away.

Amid deafening roars of 'Ram Vilas Paswan amar rahein', Chirag, in knee-high dhoti and a white sheet around his shoulders, lit the funeral pyre. 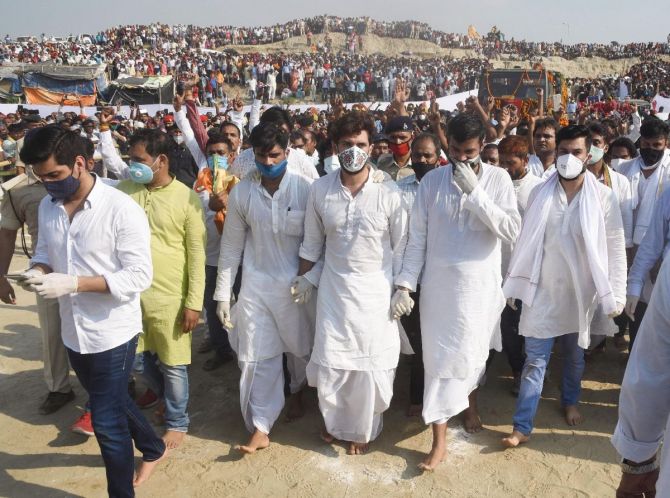 Reena Paswan, who like her husband Ram Vilas was always a perfect host, watched the ceremony from a distance, the grief on her face concealed with her mask and a dupatta.

The LJP founders other family members, who run the party affairs along with Chirag, too stood around the pyre and helped the son in completing the rituals.

Derided by his opponents for being a 'mausam vaigyanik' (weathercock), which nonetheless bore testimony to his astuteness in gauging the public mood, Paswan's entry into politics was an instance of choosing adventure over the stagnation that often comes with security. 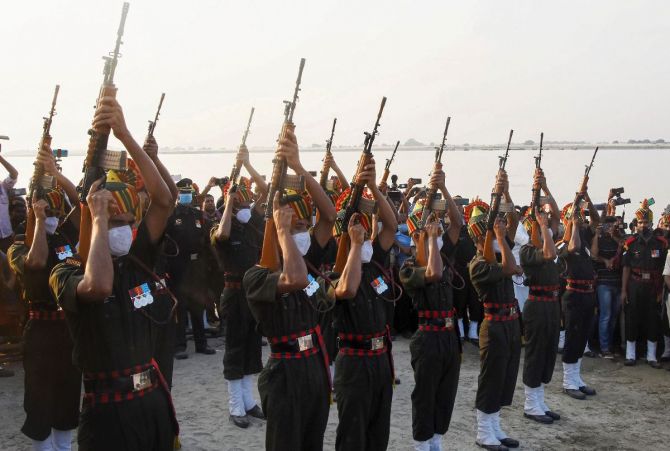 "In 1969, I was elected as an MLA around the same time I qualified for the post of a Deputy Superintendent of Police. One of my friends asked me what would you like to become, a government servant or the government itself? Thus began my political journey," Paswan had famously said.

Journalists, with whom the Union minister had been a favourite, were unanimous in the belief 'there will hardly be another one like him who remained without swagger despite enjoying so much power'. 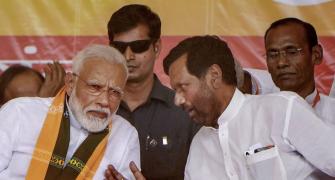 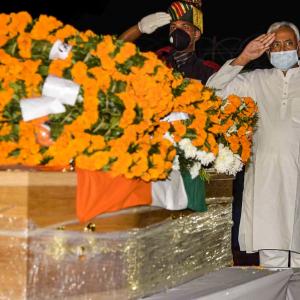 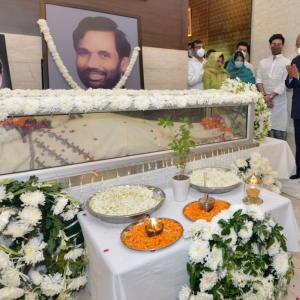