The toll from disastrous flooding caused by heavy rains and landslides in hilly areas of two central Kerala districts rose to 21 as rescue workers recovered more bodies from the rubbles on Sunday. "Spoke to Kerala CM Shri @vijayanpinarayi and discussed the situation in the wake of heavy rains and landslides in Kerala. Authorities are working on the ground to assist the injured and affected," Modi tweeted.

"I pray for everyone's safety and well-being," he said.

"It is saddening that some people have lost their lives due to heavy rains and landslides in Kerala. Condolences to the bereaved families," Modi said in another tweet.

Officials said the bodies of three children buried under slush were recovered after an intense rescue efforts.

The children, aged eight, seven and four, were found holding to each other, officials said. At Koottickal in Kottayam district, a family of six including a 40-year-old man, his 75-year-old mother, 35-year-old wife and three girl children aged 14, 12 and 10 were killed as their house was swept away in the landslide.

Bodies of three were recovered yesterday and remaining bodies were found by the rescuers during their efforts today.

Union Home Minister Amit Shah said the Central government will provide all possible support to help people in the state.

He said in a tweet that the government was "continuously monitoring the situation in parts of Kerala in the wake of heavy rainfall and flooding."

"The Central govt will provide all possible support to help people in need. NDRF teams have already been sent to assist the rescue operations. Praying for everyone's safety," Shah said.

Meanwhile, the heavy rains subdued a day after it wreaked havoc in the state.

"Under its influence, isolated heavy rainfall very likely over Kerala and Mahe on 17th October 2021 and significant reduction thereafter," it said.

Before leaving for Kokkayar in Idukki to coordinate rescue mission, Minister Rajan said the rescue operations are going on at various places as the rains have subdued in the state. 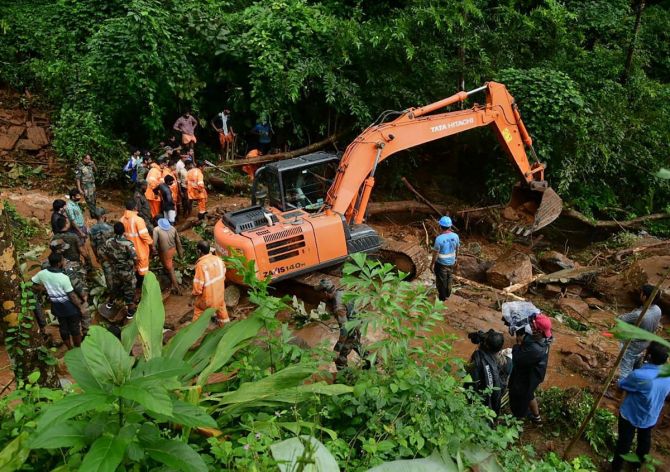 IMAGE: Rapid Action Force and Kerala fire and rescue personnel during rescue operations at the site of landslide at Kavali in Kottayam district. Photograph: PTI Photo

Earlier, an Army team had arrived at the tragedy hit sites and launched a search operation for the missing persons.

A Navy chopper reached the affected areas with relief materials.

Chief Minister Pinarayi Vijayan on Sunday urged the people of the state to exercise extreme caution even as the weatherman has withdrawn Red and Orange alerts for the south-central districts of the state and asked the public to follow the instructions of the authorities. "The weatherman has warned about strong wind and lightning till today evening. Currently, the depression, formed in the Arabian sea, has weakened. However, there are chances that it will rain till evening. Yellow Alert has been issued by the IMD for the districts of Thiruvananthapuram, Kollam, Pathanamthitta, Alappuzha, kottayam, Idukki, Ernakulam, Thrissur, Palakkad, Malappuram and Kozhikode," Vijayan said in a Facebook post.

He also informed that across the state 105 relief camps have been opened and more camps will be set up if needed.

The Navy helicopter has been deployed to distribute food kits and other essential materials in areas of Koottickal and Kokkayar where landslides have occurred. The higher secondary exams which were scheduled to begin from October 18 has been postponed. The government is yet to announce the new date.

In an early morning operation, NDRF teams have rescued nearly 80 people who were stranded in waterlogged areas of Pathanamthitta district.

Weather officials had said Peerumedu in the hill district of Idukki received 24 cm rains till 5.30 PM on Saturday. 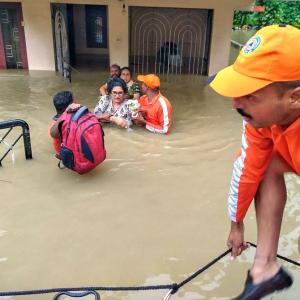 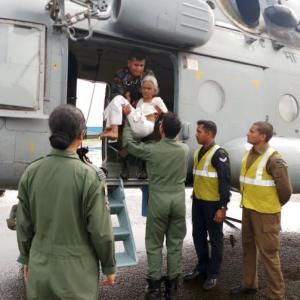