The construction of the arch of the world's highest railway bridge that soars 359 metres above the bed of the Chenab river in Jammu and Kashmir was completed on Monday, with the Northern Railways terming the achievement a milestone. 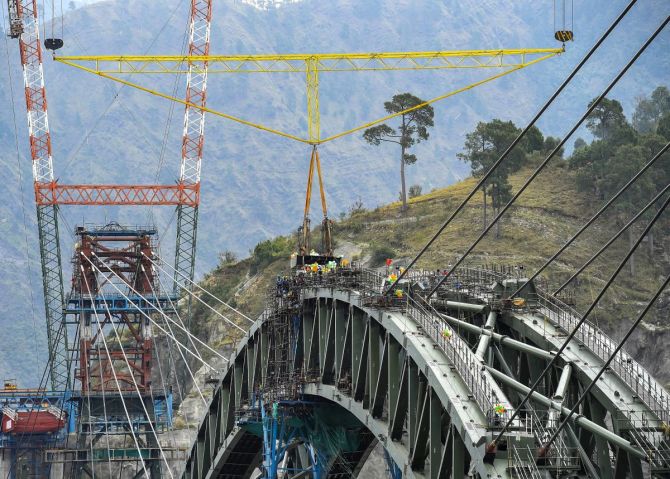 IMAGE: The bridge is 1,315-metre long and is the highest railway bridge in the world being 359 metres above the river bed level. It will be 35 metres higher than the iconic Eiffel Tower in Paris (France). Photograph: Kamal Singh/PTI Photo

The 1.3-kilometre-long bridge aims to boost connectivity to the Kashmir Valley and it is being constructed at a cost of Rs 1,486 crore as part of the Udhampur-Srinagar-Baramulla Railway Link project.

The bridge, which is 35-metre higher than the Eiffel Tower in Paris, is expected to be completed within a year, officials said.

"It is a historic day for the Northern Railways and a milestone in the completion of the USBRL project, connecting Kashmir with the rest of the country. The project will be completed within two and a half years," Northern Railway General Manager Ashutosh Gangal told reporters at the work site here in Reasi district.

Railway Minister Piyush Goyal watched the lowering of the closure segment of the arch by cable crane through a video link from Delhi. Senior officers, including Gangal and Konkan Railway Chairman and Managing Director Sanjay Gupta, attended the function here.

"The self-supporting arch is an engineering marvel and has brought us closer to our goal of the dream project. After the completion of the arch, we will move further, and are hopeful of completing the bridge within a year," Gangal said.

The railway ministry said that the 5.6-metre last piece of metal (closure segment) was fitted at the highest point of the arch on Monday. It joined the two arms of the arch that currently stretch towards each other from both banks of the Chenab, it said.

"This completed the shape of the arch. After completion of the arch work, removal of the stay cables, filling of the concrete in the arch rib, erection of the steel trestle, launching of the viaduct and track laying work will be taken up," the ministry said.

Gangal said that the construction of the bridge involves fabrication of 28,660 metric tonnes of steel, 10 lakh cubic metres earthwork and 66,000 cubic metres of concrete. 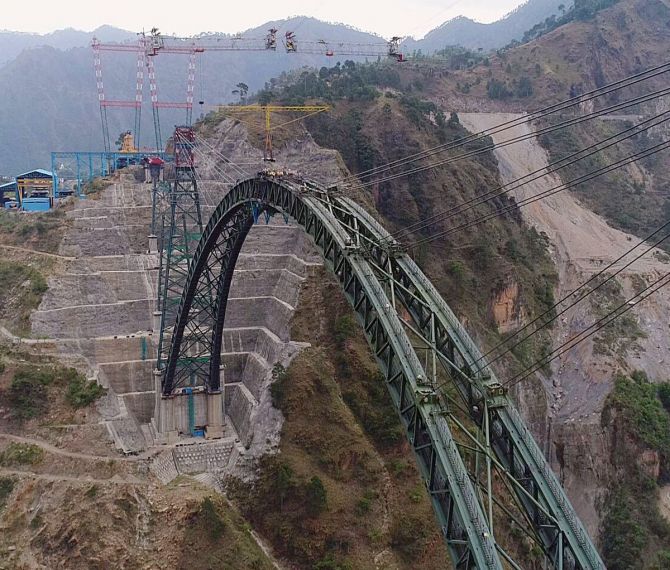 IMAGE: The overall weight of the arch is 10,619 metric tonnes and "the erection of members of the arch by overhead cable cranes was done for the first time by the Indian Railways. Photograph: ANI Photo

"The arch consists of steel boxes in which concrete will be filled to improve stability. The stay cables which are presently holding the arch will be removed as it has become self-supporting after the installation of the last piece," Gangal said.

He said the overall weight of the arch is 10,619 metric tonnes and "the erection of members of the arch by overhead cable cranes was done for the first time by the Indian Railways".

Talking about safety measures, Gangal said the bridge was designed for blast load in consultation with the Defence Research and Development Organisation. This is the first such design in the country and it can remain operational at a restricted speed of 30 kmph after removal of one pier or trestle, he said.

The bridge is designed to withstand high wind speed of up to 266 kmph and earthquake forces of highest intensity, Gangal said.

For the first time, the Indian Railways used phased array ultrasonic machines and established a NABL-accredited lab at the site for weld testing, he said.

"Approximately 584 kilometres of welding was done to join the different parts of structure, which is to the tune of distance between Jammu Tawi to New Delhi," the ministry said. 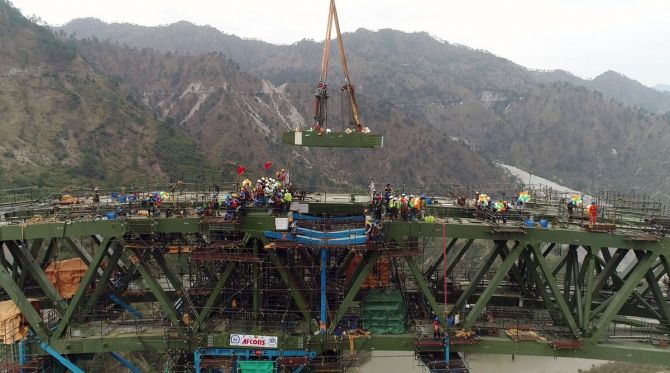 IMAGE: The bridge is designed to withstand high wind speed of up to 266 kmph and earthquake forces of highest intensity. Photograph: ANI Photo

The chairman of the Konkan Railways Sanjay Gupta said that the real challenge was the construction of the arch which was completed today.

"Some people were apprehensive about its construction but this has finally happened with the installation of the last piece. This is the heart of this project," he said.

On the construction of the arch, the ministry said that this was one of the most difficult part of the bridge.

"This achievement is a major leap towards the completion of the 111-km-long winding stretch from Katra to Banihal. It is arguably the biggest civil-engineering challenge faced by any railway project in India in recent history," it said.

"This bridge is 1,315-metre long and is the highest railway bridge in the world being 359 metres above the river bed level. It will be 35 metres higher than the iconic Eiffel Tower in Paris (France)," the ministry said. 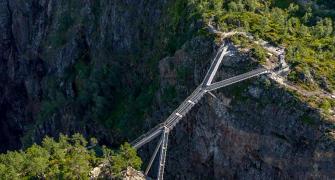 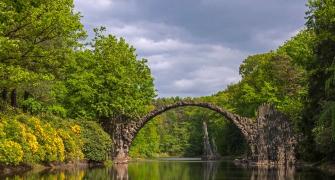 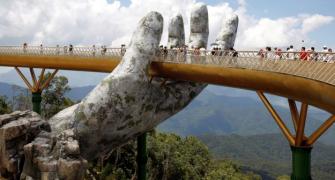 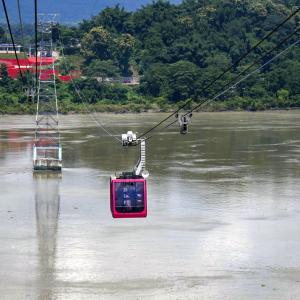 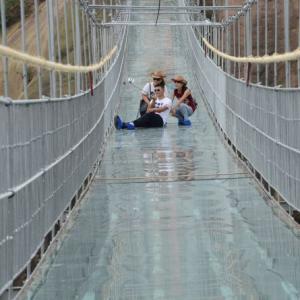