India saw 62,258 new coronavirus infections in a day, the highest single day rise so far this year, taking the nationwide COVID-19 tally to 1,19,08,910, according to Union health ministry data updated on Saturday. IMAGE: A man walks past a wall graffiti, drawn as a salute to corona warriors, in New Delhi. Photograph: Manvender Vashist/PTI Photo

Registering a steady increase for the 17th day in row, the active cases have increased to 4,52,647 comprising 3.80 per cent of the total infections, while the recovery rate has further dropped to 94.85 per cent, the data stated.

The number of people who have recuperated from the disease surged to 1,12,95,023, while the case fatality rate has further dropped to 1.35 per cent, the data stated. IMAGE: A health worker takes a nasal swab sample from a passenger for COVID-19 test, at a railway station in Jammu. Photograph: PTI Photo IMAGE: A man reacts as he receives a dose of COVISHIELD, a coronavirus disease (COVID-19) vaccine manufactured by Serum Institute of India, at an auditorium, which has been converted into a temporary vaccination centre in Ahmedabad. Photograph: Amit Dave/Reuters 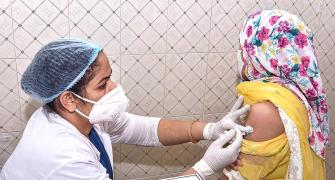 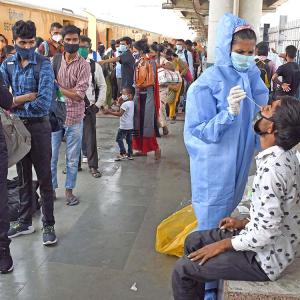