Record heavy rains lashed many parts of the national capital on Saturday, making it the wettest monsoon season in 46 years and causing extensive waterlogging that affected operations at the Delhi airport, disrupted traffic on key roads and left passengers trapped in vehicles in flooded underpasses. Delhiites woke up to the sound of thunder and lightning this morning and, according to the weather department, the city recorded 117.9 mm rainfall from 5:30 AM to 2.30 PM.

As many as 262 waterlogging complaints were received by the public works department and civic agencies till Saturday afternoon (1.30 PM), a recurring problem in the city during the monsoon.

An old building in Delhi's Narela area, which was declared a dangerous structure by civic authorities, collapsed. However, no one was injured in the incident, officials said.

As the forecourt of the Delhi airport was also waterlogged, three flights were cancelled and five diverted to Jaipur and Ahmedabad. 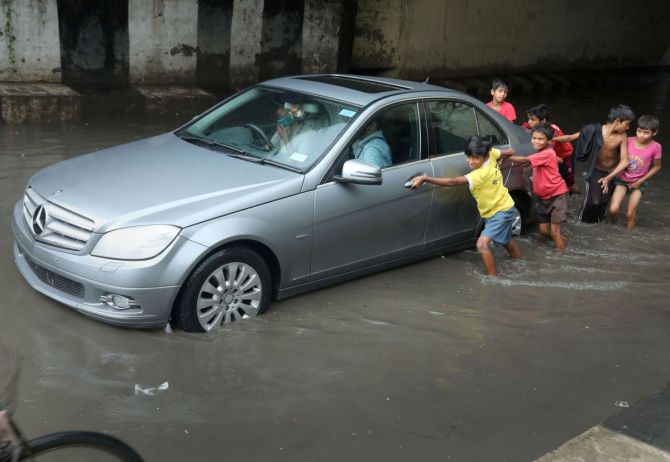 Images shared on social media, purportedly of the area, showed submerged cars and the people wading through the water to reach the entry gate of the airport.

Aviation Minister Jyotiraditya Scindia said that he spoke to airport officials and "was told that the waterlogged forecourt was cleared up within 30 minutes".

The Delhi International Airport Limited said the waterlogging at the forecourt was "for a short period" and operations have been back to normal since 9 AM. Sources said four domestic flights -- two of SpiceJet and one each of IndiGo and Go First -- were diverted to Jaipur. One international flight -- Emirates flight from Dubai to Delhi -- was diverted to Ahmedabad, the sources mentioned.

They also said that three IndiGo flights that were scheduled to depart from Delhi were cancelled due to bad weather.

Delhi Fire Service safely rescued 40 passengers from a bus that was trapped at an underpass of Palam flyover towards airport road due to waterlogging, officials said.

The call seeking assistance was received at around 11.30 AM after which two fire tenders were pressed into service, they said.

Atul Garg, Director, Delhi Fire Service said "A bus with passengers on board got trapped at the underpass at Palam flyover due to waterlogging. Two fire tenders were rushed to the spot and all the passengers were rescued safely." Another 18 passengers were trapped in a tempo and a truck and were rescued from the waterlogged area of outer Delhi's Mundka.

A call was also received by the fire service from near Mayapuri metro station area in west Delhi where a woman trapped inside the car was rescued by the fire-fighting team, the officials said.

Waterlogging resulted in heavy traffic jams at busy road stretches, including ITO, Ring Road, Mukarba Chowk, Azadpur, Pul Prahladpur and Rohtak Road. The authorities had to shut traffic movement on the Pul Prahladpur underpass due to extensive waterlogging there.

Nearly 10 instances of trees falling were reported in the city.

A highly unusual monsoon season this year has yielded 1,100 mm of rainfall in Delhi so far, the highest in 46 years, and almost double the precipitation recorded last year, the India Meteorological Department said on Saturday.

"The Safdarjung Observatory, which is considered the official marker for the city, had gauged 1,150 mm of rainfall in the 1975 monsoon season. This year, the precipitation has already hit the 1,100-mm mark and the season has not ended yet," an IMD official said. The monsoon withdraws from Delhi by September 25.

A senior PWD official said that the waterlogging at the Ring Road stretch between IP flyover and WHO building occurred due to "high-intensity rain" and overflow of a Delhi Jal Board sewer line.

The Delhi Metro said its services were not impacted due to waterlogging. It did report an issue with overhead equipment between Shahdara station and Shastri Park station on the Red line but officials did not confirm if it was due to rain. 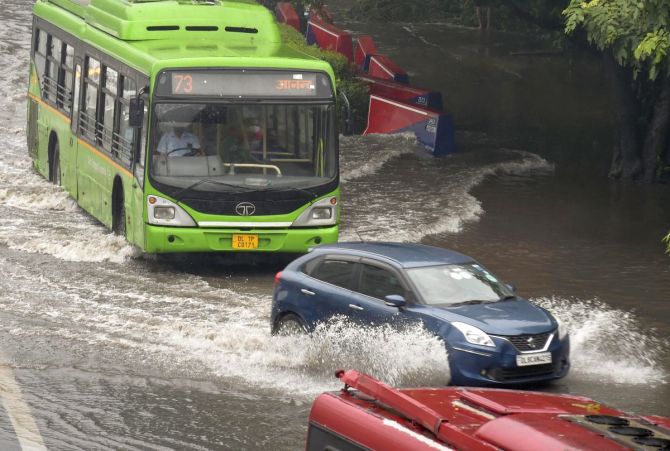 Traffic police advised commuters to avoid roads that were affected due to waterlogging.

"There is waterlogging on NH 48 near Gurugram/Parade Road Crossing. Vehicles going from Dhaula Kuan to Gurugram are the worst affected.

"These vehicles may take the right turn on Carriappa marg and take a left turn from Thimmaayya Chowk on Thimmaayya Marg to reach Airport/ Gurgaon," traffic police said in a tweet.

People posted pictures and videos of waterlogged streets on social media. In a video on Twitter purportedly showing waterlogging in Madhu Vihar, some DTC cluster buses could be seen standing in the water, and other commuters manoeuvring their vehicles through the inundated road. Chief Minister Arvind Kejriwal had last month chaired a meeting on the city's drainage plan and said that the national capital's drainage system will be improved and made "world-class" and Delhi will "get rid of waterlogging".

He had said that necessary changes as suggested by IIT Delhi will be made to "bolster" the city's drainage system and make it foolproof.

Taking a dig at Chief Minister Kejriwal, Delhi BJP leader and national secretary of Bharatiya Janata Yuva Morcha Tejinder Bagga shared a video of himself on a rafting boat in a waterlogged street in Bhajanpura area of northeast Delhi.

"This season I wanted to go to Rishikesh for rafting but due to Coronavirus and continuous lockdown I could not go.

"But I want to thank Delhi CM Arvind Kejriwal ji as he has made arrangement of rafting in every nook and corner of Delhi (as streets are waterlogged). He should also hang boards of his this feat as he does in every case," Bagga said in the video. 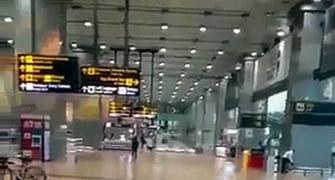