Cinemas, stadiums, town squares and other public gathering places are devoid of people as the coronavirus spreads to at least 118 countries around the world.

As of Thursday, the Johns Hopkins University tracker says 1,26,258 people have contracted the disease and 4,638 have died across the globe. The vast majority of the victims have been in China but the country said on Thursday that it had only 15 new cases.

The outbreak also claimed its most high-profile victim so far when Hollywood star Tom Hanks announced he and his wife, Rita Wilson, had tested positive. The couple, who are in Australia where Hanks is making a film about Elvis, said they had felt “a bit tired, like we had colds” before being “found to be positive” A view of an empty street amid the lockdown across all of the country, imposed to slow the outbreak of coronavirus, in Naples, Italy. Photograph: Ciro de Luca/Reuters Empty seats of a bullfighting arena pictured after the events were suspended, following an outbreak of coronavirus disease in Cheongdo county, which has been designated as a 'special care zone' since the coronavirus outbreak, near Daegu in North Gyeongsang Province, South Korea. Photograph: Kim Kyung-Hoon/Reuters Moored gondolas on an empty Grand Canal are seen in Venice amid the unprecedented lockdown across of all Italy imposed to slow the outbreak of coronavirus, in Venice, Italy. Photograph: Manuel Silvestri/Reuters Empty chairs are seen on a beach which is usually full of tourists, amid fear of coronavirus in Phuket, Thailand. Photograph: Soe Zeya Tun/Reuters General view of Kaaba at the Grand Mosque, which is almost empty of worshippers, after Saudi authority suspended umrah (Islamic pilgrimage to Mecca) amid the fear of coronavirus outbreak, at Muslim holy city of Mecca, Saudi Arabia. Photograph: Yasser Bakhsh/Reuters The holy shrine of Hani Bin A'rwa is seen empty from pilgrims, following an outbreak of the coronavirus, at the Kufa mosque, in the holy city of Najaf, Iraq. Photograph: Alaa al-Marjani/Reuters 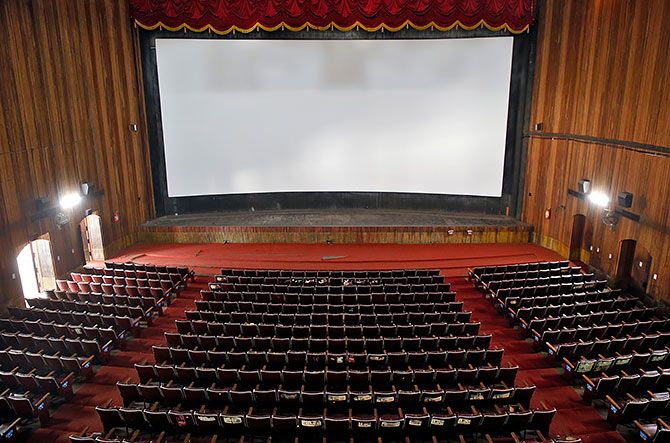 A view of an empty movie theatre after Kerala state government ordered the closure of theatres across the state till March 16, amid coronavirus fears, in Kochi, India. Photograph: Sivaram V/Reuters 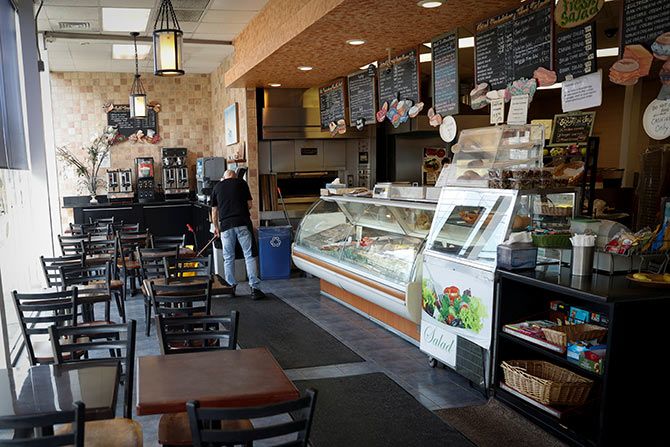 A worker mops inside an empty restaurant on North Avenue in New Rochelle, New York, US. Photograph: Mike Segar/Reuters General view as the match between Borussia Moenchengladbach v FC Cologne at Borussia-Park kicks off behind closed doors while the number of coronavirus cases grow around the world. Photograph: Wolfgang Rattay/Reuters A deserted St Peter's Square as Pope Francis gives his weekly general audience via transmitted video a day after the Vatican closed the square and Basilica due to coronavirus concerns, as seen from Rome, Italy. Photograph: Guglielmo Mangiapane/Reuters The Cathedral of Turin is eerily empty. Photograph: Massimo Pinca/Reuters 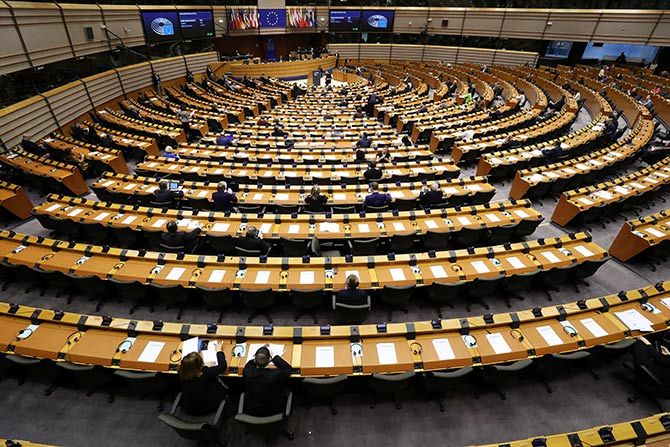 The hemicycle showing a few MEP's during a monthly plenary session of the European Parliament, shortened due to coronavirus outbreak, in Brussels, Belgium. Photograph: Yves Herman/Reuters 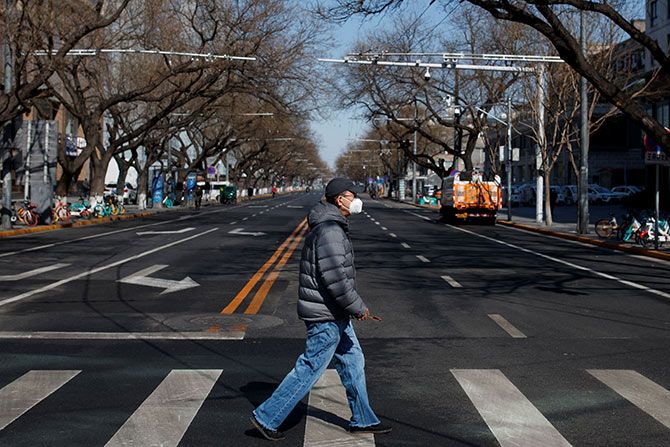 A man wearing a mask crosses an empty street in Beijing, as the country is hit by an outbreak of the novel coronavirus, China. Photograph: Thomas Peter/Reuters
THE REDIFF NEWS BUREAU
Print this article 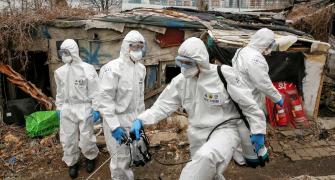 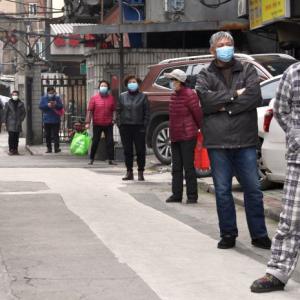