As many as 324 Indians, evacuated from China's Wuhan city, on Saturday reached New Delhi on board Air India's jumbo B747 aircraft and were admitted at the two quarantine facilities set up by the Army and the Indo-Tibetan Border Police, though none of them have tested positive for the novel coronavirus, officials said. 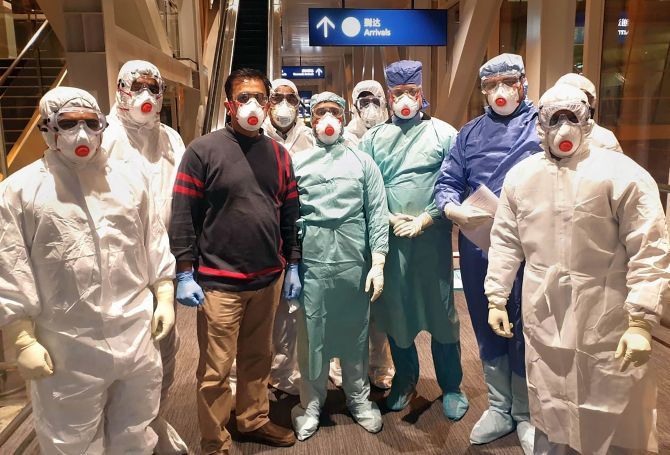 IMAGE: Doctors and other team members of the specially-prepped Air Indias B747 aircraft wait to receive the Indian students, stranded amid the coronavirus outbreak, at the airport in Wuhan, China. Photograph: PTI Photo

The plane, carrying 211 students, 110 working professionals and three minors, reached Delhi around 7.30 am, they said, adding that none of them have tested positive for the coronavirus as yet.

Another flight of the airline, which departed for the Chinese city from New Delhi around 1.37 pm to bring back Indian nationals, reached Wuhan around 5.40 pm on Saturday, the officials said.

Five doctors from the Ram Manohar Lohia (RML) Hospital, who were on board the first flight, are also in the second flight, an Air India spokesperson said.

Out of the total 324 who landed here this morning, 88 women, 10 men and six children were brought to the special quarantine facility of the ITBP in southwest Delhi's Chhawla area, ITBP spokesperson Vivek Kumar Pandey said.

IMAGE: A B747 aircraft of the Air India at the IGI Airport before its departure for coronavirus-hit city of Wuhan in China to bring back Indians, in New Delhi. Photograph: PTI Photo

The Army has also set up a quarantine facility in Manesar near Delhi to keep around 300 Indians being evacuated from China's Hubei province in view of the coronavirus infection outbreak.

Separately, border-guarding force ITBP has set up a 600-bedded facility in southwest Delhi's Chhawla area to quarantine and provide basic medical care to those suspected to have been affected by the virus.

The officials said the Indians evacuated from China will be monitored for any signs of the infection for a duration of two weeks by a qualified team of doctors and staff members.

The first flight had departed from Delhi airport at 1.17 pm on Friday to evacuate Indian nationals from China, where more than 250 people, none of them Indian, have died due to the deadly coronavirus infection. The evacuated Indians in the plane on their way to Delhi from China's Wuhan. Photograph: ANI Photo

Out of the 324 persons that have been evacuated through first Air India flight, 56, 53 and 42 are from Andhra Pradesh, Tamil Nadu and Kerala, respectively.

Two more people suspected of being affected by coronavirus have been admitted to the isolation ward of the RML Hospital here, taking the total number of patients housed at the facility to eight, hospital authorities said.

On Friday evening, two men, aged 23 and 46 years, complained of respiratory problems and fever at the hospital which has been designated by the government to deal with such cases, they said.

The Union Health Ministry on Saturday said passengers arriving from Thailand and Singapore will be screened at airports in addition to those coming from China and Hong Kong for possible exposure to the deadly novel coronavirus.

In Maharashtra, all 15 persons quarantined in hospitals for possible exposure to the novel coronavirus have tested negative, an official statement said.

No confirmed case of coronavirus infection has been found in the state so far.

In Gujarat, 64 persons who returned to the state recently from China are under observation at their homes, but no suspected case of coronavirus infection has been found among them so far, a senior health department official said.

IMAGE: Five doctors of RML hospital inside a B747 aircraft of the Air India to bring back Indians. Photograph: PTI Photo

Kerala Health Minister K K Shailaja said three people have been arrested in the state for spreading false information in social media on the novel coronavirus.

Meanwhile, IndiGo announced that it will suspend flights on Kolkata-Guangzhou route from February 6 to 25 due to the deadly novel coronavirus outbreak in China.

Air India and Indigo operate flights on five routes, out of these, flights on three routes -- two of Indigo and one of Air India - have been suspended.

Among all Indian airlines, only Air India and Indigo operate flights between India and China.

Wuhan, Hubei's capital, is the epicentre of the deadly coronavirus outbreak.

The virus has killed 259 people in China with total confirmed cases surging to 11,791 amid stepped up efforts by a number of countries to evacuate their nationals from Hubei province, officials said on Saturday. 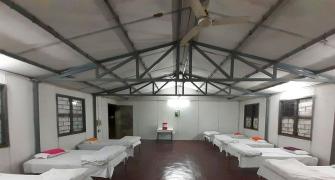