57 killed as bus falls into valley in Telangana

An overcrowded state-run bus swerved off the road and hurtled down the hillside into a valley in Telangana's Jagtial district on Tuesday, killing 57 people and wounding 30 others in one of the worst highway tragedies in the state, police said. 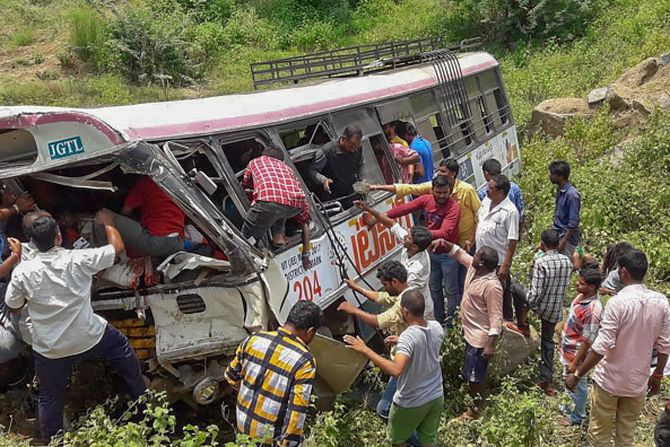 IMAGE: Rescue officials at the accident site where a state-owned Road Transport Corporation bus skidded into a deep gorge in Jagtial district of Telangana on Tuesday. Photographs: PTI Photo

The deceased included 36 women and five children. Some of the victims were pilgrims returning to Jagtial from the temple town of Kondagattu after offering prayers at the famous Hanuman temple.

The accident involving the Telangana State Road Transport Corporation bus occurred on the ghat section of the road near Shanivarapet village, about 200 km from state capital Hyderabad.

The bus was proceeding from Kondagattu to Jagtial.

Jagtial Superintendent of Police Sindhu Sharma told PTI over phone that '57 persons died in the accident. Around 30 others, who were injured, are undergoing treatment in different hospitals'.

Over 90 people were travelling in the bus and were proceeding to Jagtial town when the accident occurred around 11 am, police said.

'The bus accident in Telangana's Jagtial district is shocking beyond words. Anguished by the loss of lives. My thoughts and solidarity with the bereaved families. I pray that the injured recover quickly,' Modi tweeted.

According to information available so far, Rajender said, 86 people had bought tickets and were proceeding to Jagtial town when the accident occurred around 11 am. The exact reason for the accident was being ascertained.

The driver of the bus Srinivas, 51, was among the deceased. 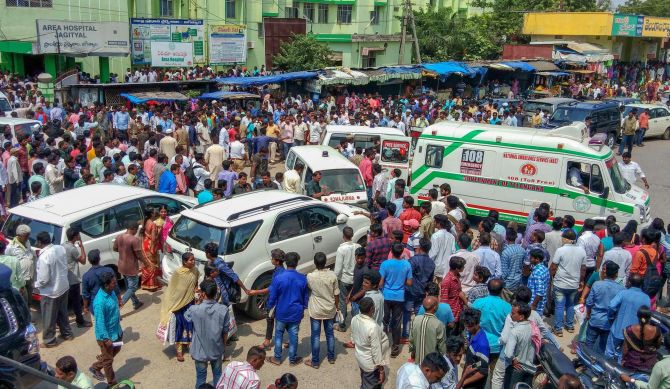 IMAGE: Relatives wait to receive the bodies of deceased bus passengers at a hospital in Jagtial.

Shrieks and wails pierced the valley at the scene of the accident as women survivors mourned the death of their dear ones.

Locals, who were the first to pull out the survivors and bodies, alleged that the road that was closed some time ago over safety issues was reopened at the insistence of TSRTC officials to save on fuel as it brought down the travel distance between Kondagattu and Jagtial.

A local resident claimed the bus was overcrowded.

A TSRTC official said the vehicle had the seating capacity for 54 people.

Police and revenue officials rescued the injured with the help of locals and rushed them to hospitals. They also pulled out bodies from the mangled remains of the bus.

The injured were rushed to hospitals in Jagtial and neighbouring Karimnagar district, police said.

"The bus is new, driver was also experienced. It is a dangerous route. Earlier also there were accidents. We will take all precautions by developing this road or diverting (the services)," the minister said.

It is suspected that the driver lost control near a speed breaker resulting in the accident. However, the exact reason is under investigation, Jagtial Superintendent of Police Sindhu Sharma said.

Telangana caretaker Chief Minister K Chandrasekhar Rao expressed shock at the tragedy and announced a financial assistance of Rs 5 lakh to the families of each of the deceased.

Condoling the deaths, Telangana state Congress president N Uttam Kumar Reddy demanded financial assistance of Rs 10 lakh to the families of each of the deceased.