Delhi Metro's Blue Line and Pink Line resumed services with interchange facilities at nine stations on Wednesday after being closed for 171 days due to the COVID-19 pandemic, officials said. IMAGE: A passenger wearing a face mask travels in a metro train after the metro services resume on Blue line from today with certain restrictions, in New Delhi . Photograph: Shahbaz Khan/PTI Photo

The services resumed with curtailed operations on these two lines at 7 am with strict safety and social distancing measures being in place.

Trains are to operate in two batches of four-hour each from 7-11 am and 4-8 pm in the first stage.

"The Blue and Pink lines resumed services today. Slowly and steadily, Delhi Metro will be back to take you places! #MetroBackOnTrack," the DMRC tweeted.

As the day began, some riders wearing face masks were seen entering the premises of key stations like Rajiv Chowk, Noida Sector 15 and Anand Bihar on the Blue Line, which connects Dwarka Sector 21 in Delhi to Electronic City (Noida) and Vaishali (Ghaziabad). Pink Line connects Majlis Park to Shiv Bihar. IMAGE: Passengers travel in a metro train after the metro services resumed on Pink and Blue line from today in New Delhi. Photograph: Shahbaz Khan/PTI Photo

Raj Kumar, who boarded the Metro at Anand Vihar, said that he faced no inconvenience during his journey.

"There was no issue regarding social distancing. I have to go to Rajiv Chowk and the journey was smooth, but we are not sure during our journey which gate is open and which is not," Kumar said.

On Monday, the Delhi Metro had resumed services with curtailed operation of the Yellow Line, since the closure of the urban transporter on March 22.

IMAGE: An aerial view of a metro train moving on a track at Anand Vihar station after the metro services resumed on Pink and Blue line. Photograph: Vijay Verma/PTI Photo

The ministry of home affairs had recently issued guidelines allowing the Delhi Metro to resume operations in a graded manner, following which the DMRC had said it would be done in three stages from September 7-12.

The DMRC said the entire Metro network will resume normal services from September 12. 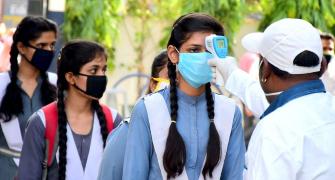 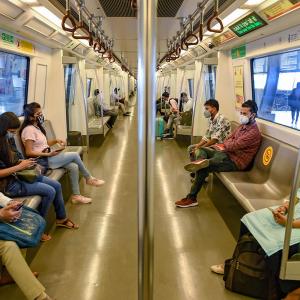 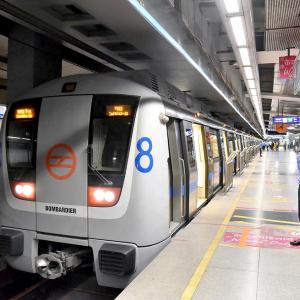